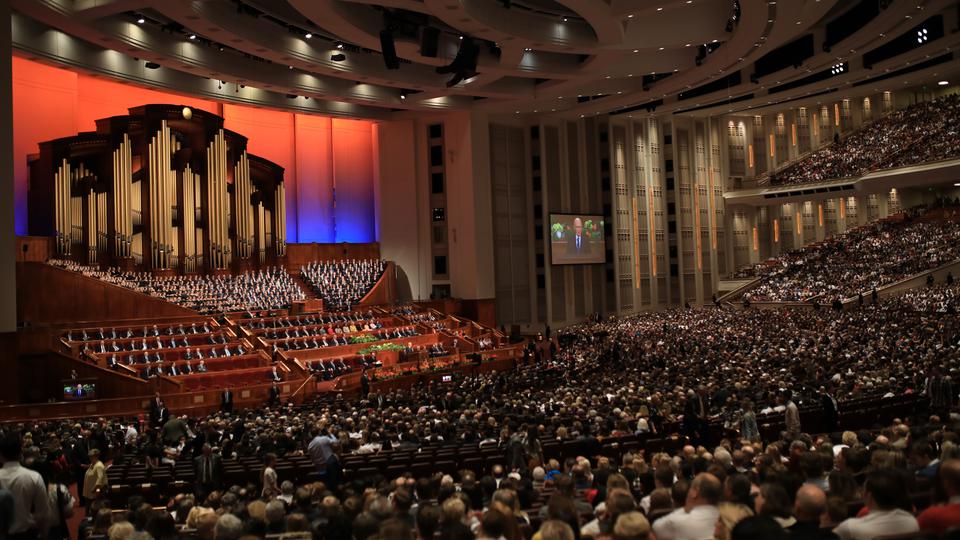 The 189th General Conference was another rich in doctrine and promises, admonitions to repent and grow, and stories that inspired and moved us. We share six of them here, but there were many more. We were richly fed.

We have a dear friend who was a train engineer. One day while he was driving a train on his route, he spotted a car stopped on the track ahead of him. He quickly realized that the car was stuck and unable to cross the track. He immediately put the train in emergency mode which engaged the brakes on each box car that extended three-quarters of a mile behind the engine, carrying a load of 6,500 tons. There was no physical chance that the train would be able to stop before it hit the car. Which it did. Fortunately for the people in the car, they heard the warning of the train whistle and escaped from the car before the impact. As the engineer spoke with the investigating police officer, an angry woman approached them. She shouted that she had seen the whole incident and then testified that the engineer did not even try to swerve out of the way to miss the car!

Obviously, if the engineer had been able to swerve and leave the tracks to avoid an accident, he and his entire train would have been lost in a derailment and the train’s forward progress would have come to an abrupt stop. Fortunately for him, the rails of the tracks on which his train ran kept the wheels of the train snuggly moving towards its destination regardless of the obstacle in his way.

Just as He Did
Bishop W. Christopher Waddell
Of the Presiding Bishopric

In the fall of 2017, my 64-year-old brother Mike informed me that he had been diagnosed with pancreatic cancer. He told me that he had received a priesthood blessing from his home teacher, and that he had also met with his bishop. He later texted me a picture of the Oakland California Temple taken from the hospital where he was receiving treatment, with the caption, “look what I can see from my hospital room.”1

I was as surprised by his comments about home teachers, priesthood blessings, bishops and temples as I was about the cancer…you see, Mike, a priest in the Aaronic Priesthood, hadn’t regularly attended Church for almost 50 years.

“As a family, we were almost as intrigued with his spiritual progress as we were with his progress in fighting the cancer, largely due to his now frequent questions about The Book of Mormon, the sealing power, and life after death. As the months passed, and the cancer spread, a need for additional, and more specialized treatment eventually brought Mike to Utah and the Huntsman Cancer Center.”

Bishop Waddell explained that Mike was visited by John Holbrook, his ward mission leader, who invited him to hear the lessons, a suggestion he politely declined. Then a month into their friendship John issued the invitation again, and this time Mike said, “Yes.” These frequent meetings, along with visits from Bishop Jon Sharp eventually led to Mike receiving his patriarchal blessing, 57 years after his baptism.

In early December of last year, following months of procedures, Mike decided to stop the cancer treatments, which were causing severe side effects, and let nature take its course. We were informed by his doctor that Mike had approximately three months to live. In the meantime, the gospel questions continued…as did the visits and support of his local priesthood leaders. On our visits with Mike we often saw an opened copy of The Book of Mormon on the bed stand, as we discussed the restoration of the gospel, priesthood keys, temple ordinances, and the eternal nature of man.

By mid-December, with his patriarchal blessing in hand, Mike actually appeared to be gaining strength and his prognosis of at least another three months seemed likely. We even made plans for him to join us for Christmas, New Years and beyond. On December 16, I received a call from Bishop Sharp, letting me know that he and the stake president had interviewed Mike, had found him worthy to receive the Melchizedek Priesthood and asked when I would be available to participate. The ordinance was scheduled for Friday, December 21.

When the day arrived, my wife, Carol, and I arrived at the care facility, and were immediately met in the hallway near his room… and informed that Mike had no pulse. We entered the room to find the patriarch, his bishop and his stake president already waiting…and then Mike opened his eyes. He recognized me and acknowledged that he could hear me and was ready to receive the priesthood. Fifty years after Mike had been ordained a Priest in the Aaronic Priesthood, I had the privilege, assisted by his local leaders, to confer the Melchizedek Priesthood and ordain my brother to the office of Elder. Five hours later, Mike passed away, crossing the veil to meet our parents as a holder of the Melchizedek Priesthood.

Abound in Blessings
Elder Dale G. Renlund
Of the Quorum of the Twelve Apostles

Often, the activation energy needed for blessings requires more than just looking or asking; ongoing, repeated, faith-filled actions are required. In the middle of the 19th century, Brigham Young directed a group of Latter-day Saints to explore and settle Arizona, an arid region in North America. After reaching Arizona, the group ran out of water and feared they would perish. They pled with God for help. Soon, rain and snow fell, allowing them to fill their barrels with water and provide for their livestock. Grateful and refreshed, they returned to Salt Lake City rejoicing in the goodness of God. Upon their return, they reported the details of their expedition to Brigham Young and pronounced their conclusion that Arizona was uninhabitable.

After listening to the report, Brigham Young asked a man in the room what he thought about the expedition and the miracle. That man, Daniel W. Jones, tersely replied, “I would have filled up, went on, and prayed again.” Brother Brigham put his hand on Brother Jones and said, “This is the man that shall take charge of the next trip to Arizona.”

Not many years ago I was weighed down and irritated with questions I could not find answers to. Early one Saturday morning I had a little dream. In the dream I could see a gazebo and I understood that I should go stand in it. It had five arches encircling it, but the windows were made of stone. I complained, not wanting to go inside because it was so claustrophobic. Then the thought came into my mind that the Brother of Jared had patiently melted stones into clear glass. Glass is stone that has undergone a state change. When the Lord touched the Brother of Jared’s stones, they glowed with light in the dark ships11. Suddenly I was filled with a desire to be in that gazebo more than any other place. It was the very place — the only place — for me to truly “see.” The questions that were bothering me didn’t go away, but more brightly in my mind was the question after I woke up: How are you going to increase your faith, like the Brother of Jared, so your stones can be turned into light?

The Immediate Goodness of God
Elder Kyle S. McKay
Of the Seventy

On December 27, 2013, Alicia Schroeder joyfully welcomed her dear friends, Sean and Sharla Chilcote, who unexpectedly showed up on her doorstep. Sean, who was also Alicia’s bishop, handed her his cell phone and solemnly said, “Alicia, we love you. You need to take this call.”

Alicia’s husband, Mario, was on the phone. He was in a remote area with some of their children on a long-anticipated snowmobile trip. There had been a terrible accident. Mario was

seriously injured and their 10-year-old son Kaleb was gone. When Mario tearfully told Alicia of Kaleb’s death, she was overcome with a shock and horror few of us will ever know. It dropped her. Paralyzed with unspeakable anguish, Alicia could neither move nor speak.

Bishop and Sister Chilcote quickly lifted her up and held her. They wept and deeply grieved together for some time. Then Bishop Chilcote offered to give Alicia a blessing.

What happened next is incomprehensible without some understanding of the atonement of Jesus Christ and the immediate goodness of God. Bishop Chilcote gently placed his hands on Alicia’s head and, with quivering voice, began to speak. Alicia heard two things as though spoken by God Himself. First, she heard her name, Alicia Susan Schroeder. Then she heard the Bishop invoke the authority of Almighty God. In that instant—at the mere utterance of her name and God’s power—Alicia was filled with an indescribable peace, love, comfort and somehow joy. And it has continued with her.

Now, of course, Alicia, Mario and their family still mourn for and miss Kaleb. It is hard! Whenever I speak with them, Alicia’s eyes well up with tears as she tells how much she loves and misses her little boy. And her eyes remain moist as she tells how the Great Deliverer has sustained her through every bit of her ordeal, beginning with His immediate goodness during her deepest despair, and continuing now with the bright hope of a sweet reunion that is “not many days hence.”

Come Follow Me
by President Russell M. Nelson
President of The Church of Jesus Christ of Latter-day Saints

One such dear friend of mine had limited experiences with God. He longed to be with his departed wife. He asked me to help him. I encouraged him to meet with our missionaries in order to understand the doctrine of Christ and learn of gospel covenants, ordinances, and blessings.

That he did. But he felt the course they advised would require him to make too many changes in his life. He said, “Those commandments and covenants are just too difficult for me. Also, I can’t possibly pay tithing, and I don’t have time to serve in the Church.” Then he asked me, “Once I die, would you please do the necessary temple work for my wife and me so that we can be together again?”

Thankfully, I am not this man’s judge. But I question the efficacy of proxy temple work for a man who had the opportunity to be baptized in this life—to be ordained to the priesthood and receive temple blessings while here in mortality—but who made the conscious decision to reject that course.

My dear brothers and sisters, Jesus Christ invites us to take the covenant path back home to our Heavenly Parents and be with those we love. He invites us to: “Come, follow me.” Now, as President of His Church, I plead with you who have distanced yourselves from the Church and with you who have not yet really sought to know that the Savior’s Church has been restored. Do the spiritual work to find out for yourselves, and please do it now. Time is running out.