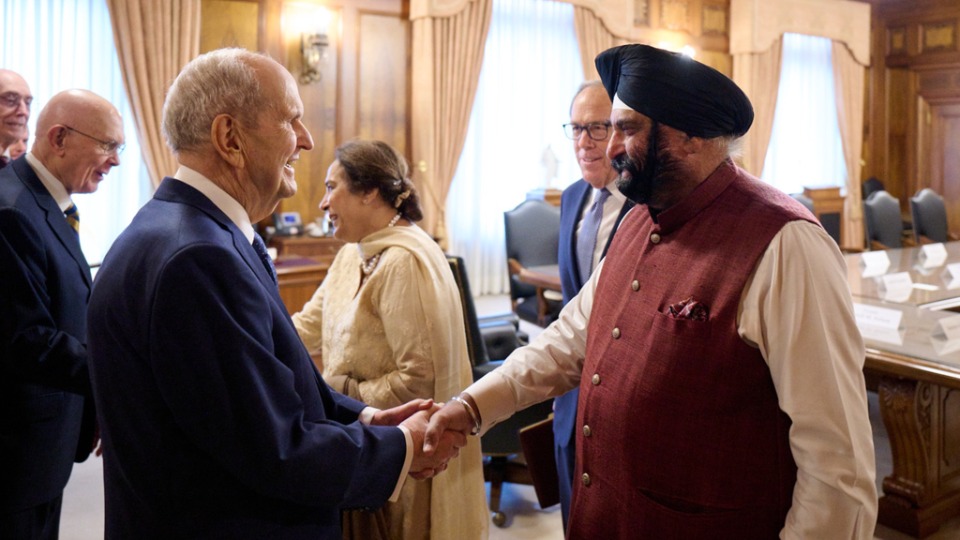 The Kandharis described their meeting with President Russell M. Nelson, President Dallin H. Oaks and President Henry B. Eyring as “warm and hospitable.”

Also attending the meeting was Elder David A. Bednar of the Quorum of the Twelve Apostles and Elder Jeffrey H. Singer of the Middle East/Africa North Area Presidency and his wife, Sandra.

“There are no words to describe how much love is there between all of you and how much love you have given us,” she said. “It was amazing and we are really so happy and honored to be here.”

“We have known Surender and Bubbles Kandhari for several years and have long admired their generous service to those in need, and their significant interfaith outreach,” said Elder Jeffrey H. Singer. “We’re grateful the First Presidency was able to visit with them and discuss the many things we share in common.”

The Kandharis also visited Welfare Square to learn about the Church’s efforts to help those in need.

“What I noticed was the commitment of people and the dedication of people,” Surender Kandhari said. “We’re really proud to be associated with the Church and its Latter-day Saint Charities. We have a joint program in Dubai, where we serve the blue-collar people, the needy people. I think this is just the beginning. There is a lot more work to do.”

“It was beyond any imagination,” said Bubbles Kandhari. “I couldn’t even think the extent to which you all go, the quality and the volunteers who are helping. It is not a small thing. It’s a huge effort and a huge organization.”