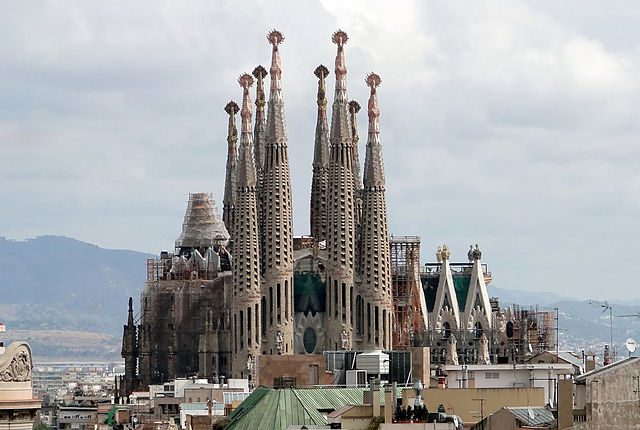 When I finally had a chance to see it in person, though, I liked it much more than I had expected.  Much more. Particularly the interior.

Of course, if Christopher Hitchens’s declaration that “religion poisons everything” be taken as literally true, one must also conclude that La Sagrada Familia is toxic.  Maybe Barcelona, Spain, and the world would be better off without it.

If this is an example of how “religion poisons everything,” as the late Mr. Hitchens put it, I confess that I like the poison.

Abraham Lincoln’s Second Inaugural Address is a profoundly religious document (virtually inconceivable today).  Is the Hitchens Principle applicable?  Does the speech’s religiosity really poison it?  Judge for yourself:

At this second appearing to take the oath of the Presidential office there is less occasion for an extended address than there was at the first. Then a statement somewhat in detail of a course to be pursued seemed fitting and proper. Now, at the expiration of four years, during which public declarations have been constantly called forth on every point and phase of the great contest which still absorbs the attention and engrosses the energies of the nation, little that is new could be presented. The progress of our arms, upon which all else chiefly depends, is as well known to the public as to myself, and it is, I trust, reasonably satisfactory and encouraging to all. With high hope for the future, no prediction in regard to it is ventured.

On the occasion corresponding to this four years ago all thoughts were anxiously directed to an impending civil war. All dreaded it, all sought to avert it. While the inaugural address was being delivered from this place, devoted altogether to saving the Union without war, insurgent agents were in the city seeking to destroy it without war–seeking to dissolve the Union and divide effects by negotiation. Both parties deprecated war, but one of them would make war rather than let the nation survive, and the other would accept war rather than let it perish, and the war came.

One-eighth of the whole population were colored slaves, not distributed generally over the Union, but localized in the southern part of it. These slaves constituted a peculiar and powerful interest. All knew that this interest was somehow the cause of the war. To strengthen, perpetuate, and extend this interest was the object for which the insurgents would rend the Union even by war, while the Government claimed no right to do more than to restrict the territorial enlargement of it. Neither party expected for the war the magnitude or the duration which it has already attained. Neither anticipated that the cause of the conflict might cease with or even before the conflict itself should cease. Each looked for an easier triumph, and a result less fundamental and astounding. Both read the same Bible and pray to the same God, and each invokes His aid against the other. It may seem strange that any men should dare to ask a just God’s assistance in wringing their bread from the sweat of other men’s faces, but let us judge not, that we be not judged. The prayers of both could not be answered. That of neither has been answered fully. The Almighty has His own purposes. “Woe unto the world because of offenses; for it must needs be that offenses come, but woe to that man by whom the offense cometh.” If we shall suppose that American slavery is one of those offenses which, in the providence of God, must needs come, but which, having continued through His appointed time, He now wills to remove, and that He gives to both North and South this terrible war as the woe due to those by whom the offense came, shall we discern therein any departure from those divine attributes which the believers in a living God always ascribe to Him? Fondly do we hope, fervently do we pray, that this mighty scourge of war may speedily pass away. Yet, if God wills that it continue until all the wealth piled by the bondsman’s two hundred and fifty years of unrequited toil shall be sunk, and until every drop of blood drawn with the lash shall be paid by another drawn with the sword, as was said three thousand years ago, so still it must be said “the judgments of the Lord are true and righteous altogether.”

With malice toward none, with charity for all, with firmness in the right as God gives us to see the right, let us strive on to finish the work we are in, to bind up the nation’s wounds, to care for him who shall have borne the battle and for his widow and his orphan, to do all which may achieve and cherish a just and lasting peace among ourselves and with all nations.

I knew the name Christopher Hitchin's name from praise handed out for him on conservative political sites and some of his less pleasant "habits" because read about here and there but by no means expert on him or his thinking. I became interested in his persona when he made a comment about Mormonism just before his death and I assumed the remark was driven by the media exposing all of our sacred or reverently held doctrine/beliefs/people and probably that Hitchins had had no reason to look into the church history or culture or mores or mannerisms let alone the finer doctrine--the Jesus stuff. The news today about Hitchin's is his writing about Orwell as a forward to Orwell's diaries publication. It is supposed to be his last writings-formal writings. An online search gives many more links and Orwell as a favorite person/writer/thinker. . https://www.theguardian.com/books /2012/jul/16/christopher-hitchens-george-orwell-diaries The more telling and interesting thing that first got me to wonder about the hedonistic atheist, supposedly happy with his self envisioned lot as he lay dying is that he talked of Mormonism and found it somewhat "sinister". What darkness came to his insides that he felt a sinister force or feeling or something? https://www.slate.com/articles/news_and_politics/fighting_words/2011/10/is_mormonism_a_cult_who_cares_it_s_their_weird_and_sinister_beli.html "Of course, it surprises none of us that Hitchens would elect to weigh in on the Mormon moment. But what is noteworthy about the essay is how sloppy and hysterical he sounds." So says rd. https://religiondispatches.org/does-christopher-hitchens-think-mormons-are-sinistererer/ For an afterlife believer and a new reader of Hitchins I wonder what phase he is in now? Baptist Hell or Catholicism's or Dantes? He may find Mormon Spirit Prison even more maddening? Sinister indeed?

More than three decades ago, I joined the LDS Church. Likewise, in the ensuing years, I have made a solemn promise to give all that I have and do everything I can to the building up of the Church. Is the Church Religion? By every accepted standard, "Yes, it is." Yet within the context of the topic at hand ... of "Religion poisons everything," I find myself asking, "Do our actions reflect our ideals," and if not, why not? My observations seem to suggest that "religion," no matter how pure, becomes a handle which can be grasped either tightly, or loosely, or even, not at all -- a garment that can be donned or discarded, as circumstances dictate. To be sure, you can go through the motions -- showing up for sacrament and paying tithing and and and ... yet can't these outward manifestations take the place of true and honest personal reflection ... of asking "What am I doing ... really?" In its place can there be found the calm but false assurance that come from merely living the letter of the law, while avoiding the hard choices that accompany being compelled by the spirit and truly following the example of Christ? The highest level of behavior can be found in BOTH His courage and his kindnesses. These behavioral paths are established fact -- we may ignore them for a time, but they cannot be avoided. This is personal reflection -- not high and mighty social commentary. I seek an approach that compels me to pay far greater attention to the forces of true salvation ... to my personal adherence to the laws ... just as I must with other immutable, unavoidable physical laws ... like gravity. Which leads me to ask, "When it is all said and done, isn't the Gospel of Jesus Christ really the 'Science of Salvation'" ? And if so, could that hone a sharper edge on its Sword of Damocles demands? There is no doubt that Jesus is the Christ. There is no doubt that we are eternal beings engaged in a brief mortal experience. It is a hard and inescapable truth that we will be held accountable for our knowledge of these absolute and eternal FACTS. Perhaps we could say that there is a sort of "Spiritual Darwinism" at work here -- not the law of tooth and claw, but rather, the understanding that, if we want to proceed in the eternities to the utmost of our capacity, it is imperative that, during this proving phase when the veil is drawn, that we not make excuses for ourselves and let Christ make up the difference. If we do not allow that the facts are indisputable, are we making the most of this glorious but indescribably difficult experience? Doesn't Satan's lasting strategy include the perception that "Religion poisons everything" because those who profess to believe are inherently and eternally flawed? He wants doubt ... he sows it. Because everyone's belief flags ... everyone's actions fall short. Perhaps it is a question just of semantics ... but at least for me, the realization that Christ is the author of the Science of Salvation and that our eternal progress is dependent on our understanding of a Spiritual or Eternal Darwinism moves the concept of a religious belief to a hard and unavoidable physical law. As they say in the practice of law, would we not be well-advised to "govern ourselves accordingly?"