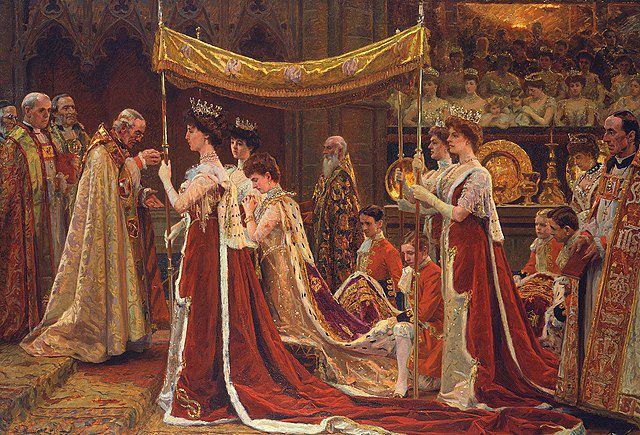 All the way back in 2016, I posted the following here on this blog:

For someone who is both an Anglophile and a passionate lover of history, it’s a feast.

And, since I’ve been quite sick for the past week or so, it’s come at a very good time.  I’ve felt too terrible to read a lot of serious stuff, and Law and Order gets old fast.

I believe, moreover, that while, even at its grandest, earthly monarchy is only a dim shadow of the divine monarchy that it represents, it does, nonetheless, occasionally capture something of the celestial reality.

And many Latter-day Saints, I think, will recognize that fact most clearly in this drama through its remarkable depiction and discussion of the ritual anointing with oil that is performed in the royal coronation.

I’ve been following the coverage of the passing of Queen Elizabeth II fairly closely when I can.  And, against that background, this little article caught my attention in a peculiar way:

“A Ruler Who Sought Not Greatness, But Goodness: With the passing of Queen Elizabeth II, the world lost a leader who embodied stability and decency.”

I recommend reading it.  The author is clearly right that “this woman . . . had neither sparkling intellect [n]or show-stopping looks,” but also that she was something truly remarkable.  I’ve sometimes thought the same thing about George Washington, who was certainly not the most brilliant or talented of the American Founding Fathers but to whom, amazingly, virtually all of the Founders deferred.  (I’ve been thinking, for quite a while, of writing an essay on that peculiar quality in Washington, who has been, rightly I think, called “the indispensable man.”)

I’ve wondered, with our celebrity culture and given the rather curious fascination with the British monarchy and the Royal Family among many Americans, despite the fact that they threw George III off way back in 1776 and have no real discernible desire for a genuine home-grown aristocracy, if there isn’t a God-shaped hole here.

“There’s such divinity doth hedge a king,” says Shakespeare’s Claudius at Hamlet 4:5:138.  In an interview, one of the women who served as a maid of honour for Elizabeth II at her 2 June 1953 coronation commented on the anointing that was part of it, which, she said, the Queen plainly regarded as a real divine consecration that set her apart from ordinary mortals.  Not as a matter of pride or arrogance, but as a matter of duty.  That duty, and that separateness, were conferred upon her by her special status — a status that wasn’t merely legal or traditional or formal, but real.  A status that had been divinely created in her by her anointing.

Famously, Queen Elizabeth’s coronation was televised.  There were those who had vigorously opposed televising it, on account of its holiness.  The young Queen herself came down on the side of the traditionalists, and against television cameras.  A coronation was a sacred occasion, not a sporting event.  One consideration was this:  Those actually in attendance at Westminster Abbey would, of course, be suitably dressed and behaving appropriately.  But what about the ordinary audience, not only British subjects but citizens of the Commonwealth and other people around the globe, who would be staring at the telly at home?  Who could guarantee the solemnity of their participation?  Might they not be sitting there in their bathrobes, drinking a beer, filling an ashtray with cigarette butts, cracking irreverent jokes, emptying bags of potato crisps?

In the end, apparently, it was Prince Philip who won the day, persuading his wife and the others that the monarchy needed to enter into the modern age.  But one specific part of the coronation ceremony was still not allowed to be televised:  The Queen’s anointing with holy oil was deemed too awesome, too sacred, for the television cameras, and it was shielded from public view and from those cameras by a golden screen.

I can understand such reservations, and I dare say that many Latter-day Saints will understand them, as well.

But back to this possible hankering to do reverence to a monarch:  I’ve been touched, as I’ve watched Britons quietly passing in a line by Queen Elizabeth’s coffin, to see them pause, bow their heads, and curtsy toward it.  Something within me, at least, resonates to such a gesture — even as, rationally, I know that the Queen was, from a certain perspective, simply a nice old lady who was not fundamentally very different from the rest of us.  We feel a need for reverence.

And that, I think, to borrow an argument-form from C. S. Lewis, suggests to my mind that there does exist, somewhere, a proper object of reverence, a Person who is actually and not merely symbolically worthy of our veneration and worship.  The great German theologian, philosopher, and scholar of comparative religions Rudolf Otto (1869-1937) wrote of what he called the mysterium tremendum et fascinans, which he defined as a sense of something mysterious, overwhelming, and daunting that evokes in us a sense of diminution, humility, submission, and creatureliness.  I have something like that in mind here.

In this context, I’m reminded of a couple of incidents recorded in the New Testament’s Revelation of John:

And he said unto me, These sayings are faithful and true: and the Lord God of the holy prophets sent his angel to shew unto his servants the things which must shortly be done.  Behold, I come quickly: blessed is he that keepeth the sayings of the prophecy of this book.  And I John saw these things, and heard them. And when I had heard and seen, I fell down to worship before the feet of the angel which shewed me these things.  Then saith he unto me, See thou do it not: for I am thy fellowservant, and of thy brethren the prophets, and of them which keep the sayings of this book: worship God.  (Revelation 22:6-9)

In both cases, John falls down to worship an angel, who tells him to stop, that he (the angel) is not God and is therefore also not a proper object of worship.  In the second instance, the angelic messenger has even begun to speak in the first person as if he were Christ himself, so John has good reason for his error.  (Note too, incidentally, that the angel in the second passage identifies himself not as a member of a separate order of angelic beings, as most Jews, Christians, and Muslims have historically conceived angels, but as a “fellowservant, and of thy brethren the prophets, and of them which keep the sayings of this book.”)  What brings these passages to mind, though, is the obviously instinctive reaction on John’s part that leads him to “fall down to worship” the glorious being before him.

Earthly monarchs have historically represented God.  Always inadequately, it’s true, and sometimes horribly.  But I think that there might be a deep sense there, perhaps one might even call it a memory, of a Person before whom it would be entirely appropriate to kneel.

I sometimes read brave declarations from certain atheists who announce what they will say when and if they ever stand before God.  They will, they pledge, confront him and demand x and protest y.  Frankly, though, I doubt that they’ll say anything at all.  And I doubt that they’ll still be standing.