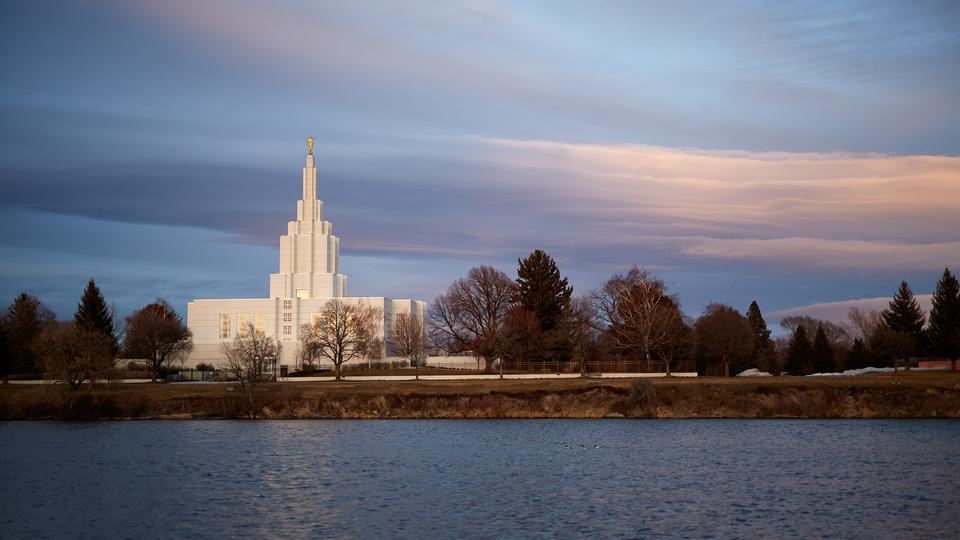 Latter-day Saints in southeastern Idaho are ready to host thousands of visitors to the newly renovated Idaho Falls Idaho Temple. Following more than two years of extensive interior renovation, a public open house is scheduled to begin at the historic temple, located on the picturesque banks of the Snake River. The temple closed in March 2015 for renovations.

Kevin Call is one of the many residents who grew up in the Upper Snake River Valley. “Our family has been in the valley since the turn of the century in the early 1900s. The temple has been a prominent thing for us, not only church-wise but community-wise. It’s been such a monument on the river, a beautiful place,” said Call.

The valley’s first Mormon settlers arrived with the railroad in 1879.

“The Idaho Falls Temple is this grand architectural statement about where the Church wanted [to] be in its next hundred years, as much as the Salt Lake Temple is a statement about where it had been for the last hundred years,” said Emily Utt, historic sites curator for the Church History Department. “We wanted this temple to still feel like it had been built in the 1940s. We didn’t want this to feel like a brand-new building.”

All the mechanical and electrical systems in the temple were upgraded. “The team spent lots of time reviewing the historical data that we had on the temple,” said Mark Berry, a project manager for the Church. “The architect and the design teams went back through and picked out the type of materials that [were] prevalent back in the original temple.”

Berry said great care was taken to preserve the murals inside the temple. “We actually built plywood walls in front of these murals to protect them so that there wouldn’t be any construction debris that would scar up or mar any of the murals.”

“These murals were painted by the leading LDS artists in the 1930s and ’40s,” said Utt. “These murals represent the finest work of some of the greatest artists that the Church has ever produced.”

Utt said a firm was hired from Chicago to work quickly over a four-month period to restore the murals. “Within a couple of weeks of our phone call [we] had 10 conservators on site, which in the conservation community would be about maybe a third of the entire conservation community in the U.S.,” she explained. “They had to remove a lot of damage caused by other people trying to be helpful. And then there [were] the repairs that needed to happen because of 70 years of grime and just gunk that [builds] up on the murals.”

The Idaho Falls Idaho Temple was the first Mormon temple to be built in Idaho. Plans were announced to build the temple on March 3, 1937. Construction of the temple was completed during wartime, but the dedication waited until the end of World War II. Approximately 15,000 people were in attendance when J. Reuben Clark Jr. of the First Presidency, the highest governing body of the Church, conducted the eagerly awaited cornerstone ceremony on Saturday, October 19, 1940. The temple was dedicated by President George Albert Smith on September 23, 1945. In 1960, a visitors’ center was completed and later remodeled, and a statue of the angel Moroni was attached to the temple’s steeple in 1983.

“It is my refuge; it is my home away from home. I come here to give up the daily stresses of life,” expressed resident Darla Barlow. “As you come through at night and see the glow and the reflection off the river, you can’t help but have your thoughts lifted heavenward, and I hope that will be the light that the community will feel when they come.”

Rachel Allen was born and raised in Idaho Falls. “I think when a community has a temple it changes a community. There’s more light; there’s a different spirit here. And it’s just been here for so long it’s an icon of the community,” said Allen.

Latter-day Saint temples differ from the meetinghouses or chapels where members meet for Sunday worship services. Temples are considered “houses of the Lord” where Christ’s teachings are reaffirmed through marriage, baptism and other ordinances that unite families for eternity. Inside, members learn more about the purpose of life and make covenants to serve Jesus Christ and their fellowman.

The temple is important because it’s a place where we focus on families, eternal families,” said resident Ben Jenkins, who was married in the Idaho Falls Idaho Temple, as were his parents and his wife’s parents. “We believe that families truly can be together forever, and we teach the gospel of Jesus Christ in the temples.”

Jenkins continued, “I’ve been doing a lot of family history, so I’ve got a lot of work to do when we come back.”

“There’s a lot of people in the community who are of different faiths. And they ask questions about the temple. But I’m excited for them to come and see what the temple is all about,” said Michael Musingi, a member in Idaho Falls who grew up in Kenya.

The temple will be formally rededicated on Sunday, June 4, 2017, in three sessions. Prior to the rededication of the temple, local youth will present a cultural celebration featuring music and dance on Saturday, June 3, 2017.