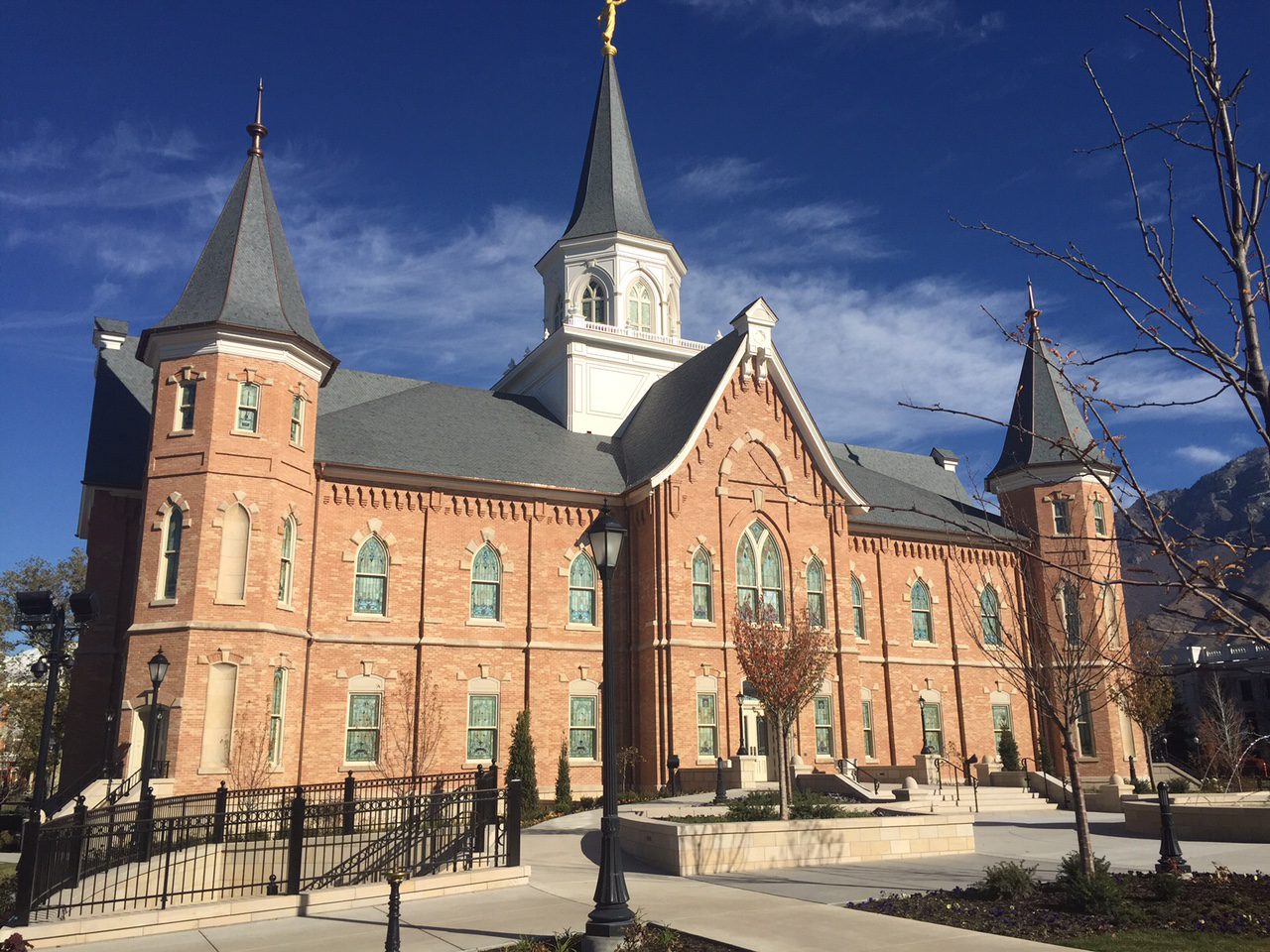 Provo City Center Temple: A Mighty Change at the Heart

When the Provo Tabernacle was originally being constructed from 1883 to 1898, it involved countless hours of volunteered labor and continual, local fundraising efforts. It became, for good reason, a symbol in Provo of the pioneering spirit. The people of the surrounding community at that time, were intimately involved in the building up of what they didn’t know would one day become the 150th temple of The Church of Jesus Christ of Latter-day Saints.

What is now the Provo City Center Temple will open its doors for a public open house starting January 15, 2016, with dedicatory ceremonies to come on March 20, 2016.

Those early Saints had merely hoped to build a meeting place and indeed they succeeded in that endeavor. They built a magnificent building that, in addition to hosting a few sessions of General Conference (in 1886 and 1887), became the venue for over a century of concerts, conferences, graduations and funerals. U.S. President William H. Taft spoke there and even Sergei Rachmaninoff filled its hall with his music in 1938.

It became a historic treasure and so the devastating fire in December of 2010, that took out the majority of the interior and led to the complete collapse of the roof, was a blow to the community. Emily Utt of the LDS Church History Department said that that event left people wondering, “Has Provo lost its heart?”

What Provo and the rest of the Church didn’t realize then, was that it was merely being prepared for a “mighty change of heart.”

FFKR Architect Roger Jackson said he was one of only eight or so people who knew of the plans to convert what was left of the Provo tabernacle to an LDS Temple when President Thomas S. Monson made the official announcement about it at a session of General Conference in October 2011.

The audience that was there gasped in surprise and excitement, while Jackson sighed in relief. He was glad that the idea hadn’t leaked at any point before his team was sure it was feasible. President Monson approached them with the idea when they were originally planning to restore it to its former function, they were preparing to go to Europe to investigate the options for a new organ to take its place at the center of the restoration. One call from the office of the First Presidency and their job was now to see whether a radical conversion could be done instead.

It could be and it has been.

Many feats of engineering were required to make it possible. Fourteen tons of debris had to be removed from the site and it was a delicate process to secure the walls that had remained standing so that they could be used in the new structure.

Kirk Dickamore, the General Contractor for the project said that the building had to “literally rise from the ashes” so that the team could reinforce the foundation and add on lower levels. The 6.8 million pound shell of the building was placed on 40 ft stilts, defying gravity while they did what had to be done underneath. Dickamore says it was, “painstaking, breathtaking and unmatched.”

The foundation of the former tabernacle was actually one of several foundations on the grounds of what will now be the Provo City Center Temple that have been able to be excavated and explored during the course of construction.

Lying just north of where the new tabernacle was built, the original Provo Tabernacle was finished in 1861 and stood until 1919. It was a smaller building and largely insufficient for the needs of the Saints, but exploring its foundation has unearthed many treasures, large and small. The basement of the building once served as a meeting place for the Provo 1st ward (before there was a Provo 131st ward) and in the foundation, presumably having fallen through the old floors, were little toys, necklaces, buttons and pins, brooches and marbles; all kinds of items left behind long ago by the members that met there.

Additional structures uncovered on the grounds were a caretaker’s cottage, a well and a baptistry. The baptistry is the earliest known of its kind in the Church. Originally, baptisms would have been performed outdoors, in a river or a pond. This structure was built to provide the opportunity for baptisms year-round. This was the first time the Saints could be indoors and have the opportunity to heat the water. Findings in the foundation suggest that the walls were painted pale blue. Perhaps they still wanted to preserve that feeling of being out under the sky.

Excavation of the baptistry.

Guessing at the original intentions of those that designed these structures is not easy, but it is something that was an important aspect of the development of the Provo City Center Temple. Roger Jackson said they were careful in the architecture to reflect what would’ve been done in that period. Their desire was to elevate rather than update the temple building.

Jackson said they were constantly asking themselves, “what is the character of this building?” He also said that they “tried to make sure that the loudest voice [in the decision-making process] was William Harrison Folsom,” who was the architect of the former Provo tabernacle as well as for the Manti Utah Temple. They were constantly asking themselves, ‘what would William do? What would he think?’

It is in this way that the design team was able to convert this building into something much greater than it was before while still honoring the memory and the abilities of those that originally invested in the structure.

Though nearly none of the stained glass from before the fire was salvageable, it had been so well photographed and documented that they were able to recreate the pieces just as they had been before. The windows each tell the story of this community, some with beehives atop them, others with books. A unique feature of this new temple is that the phrase “Holiness to the Lord, the House of the Lord,” that is prominently visible on most LDS Temples, is featured on this temple, in stained glass above the entry door rather than being inscribed into the building itself. It too is a window that tells a story.

One of the most striking parts of the whole history and now conversion of the Provo Tabernacle into the Provo City Center Temple is all of the stories. The structure has already been a part of thousands of lives. From those that walked door to door collecting funds for the original building to the owner of a single shoe left there in the 19th century and found in the excavations, those that met their spouses at events there, heard speakers that changed their testimonies forever or sat in their graduation ceremonies in those seats, nervous about what to do next. And that’s before the hundreds of people that have worked to convert the building into a temple even came on the scene.

The grounds of the Provo City Center Temple, though as yet closed to the public, have already been the site of a million impactful moments and a thousand inspiring stories and you can feel it.

And soon, the doors will be open again and new pioneers will continue the story.

What seems like little details actually make a significant difference -- according to revelation (see D&C 115:4): "For thus shall my church be called in the last days, even The Church of Jesus Christ of Latter-day Saints." Please note that the "The" is capitalized and part of the proper name. Also, place a hyphen between Latter and day; finally do not capitalize the "day". Thank you for the article.

Good story - it should have noted that the center cupola or spire was part of orig design, but the roof structure would not sustain it. Now the TOTAL design can be appreciated. Why not mention Jacobsen as the GC team leader to build this. Sure the A/E's do much, but without the can do experience of the craftsmen and their supervision, you would not have such a wonderful edifice. Go look to engineering journals etc to capture more of the genius it took to make it look so perfect. Simply marvelous.