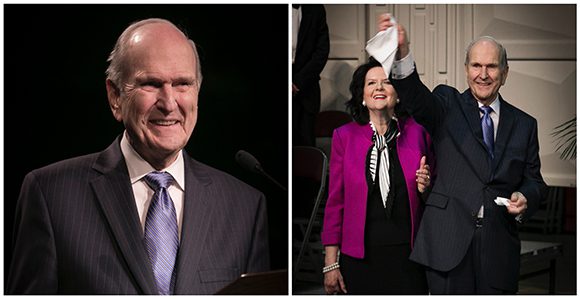 “The First Presidency and Quorum of the Twelve Apostles counsel together and share all the Lord has directed us to understand and to feel, individually and collectively,” President Nelson shared in the first Worldwide Devotional for Young Adults this year. “And then, we watch the Lord move upon the President of the Church to proclaim the Lord’s will.” Speaking specifically of recent changes to the Church’s handbook regarding same-sex couples and their families, President Nelson said:

“Filled with compassion for all, and especially for the children, we wrestled at length to understand the Lord’s will in this matter . . . We met repeatedly in the temple in fasting and prayer and sought further direction and inspiration.

“And then, when the Lord inspired His prophet, President Thomas S. Monson, to declare the mind of the Lord and the will of the Lord, each of us during that sacred moment felt a spiritual confirmation. It was our privilege as Apostles to sustain what had been revealed to President Monson. Revelation from the Lord to His servants is a sacred process. And so is your privilege of receiving personal revelation.”

True millennials will do “impossible things” as they understand their identity and purpose and put their trust in the Lord, President Russell M. Nelson, President of the Quorum of the Twelve Apostles, declared during a Worldwide Devotional for Young Adults broadcast on January 10.

“My beloved brothers and sisters, you were born to be ‘true millennials,’” he said. “You are a chosen generation, foredetermined by God to do a remarkable work—to help prepare the people of this world for the Second Coming of the Lord.”

Speaking to the generation referred to as “millennials,” President Nelson counseled young adults and spoke of the important role they have in moving the gospel of Jesus Christ forward.

The devotional, held in the Cannon Activities Center on the Brigham Young University–Hawaii campus in Laie, Hawaii, was translated into multiple languages and broadcast to chapels and homes throughout the world. Sister Wendy W. Nelson, President Nelson’s wife, also spoke. The BYU–Hawaii Concert Choir performed music for the live event.

“The term millennial is perfect for you if that term reminds you of who you really are and what your purpose in life really is,” President Nelson said. “A true millennial is one who was taught and did teach the gospel of Jesus Christ premortally and who made covenants with Heavenly Father there about courageous things—even morally courageous things—you would do while here on earth.”