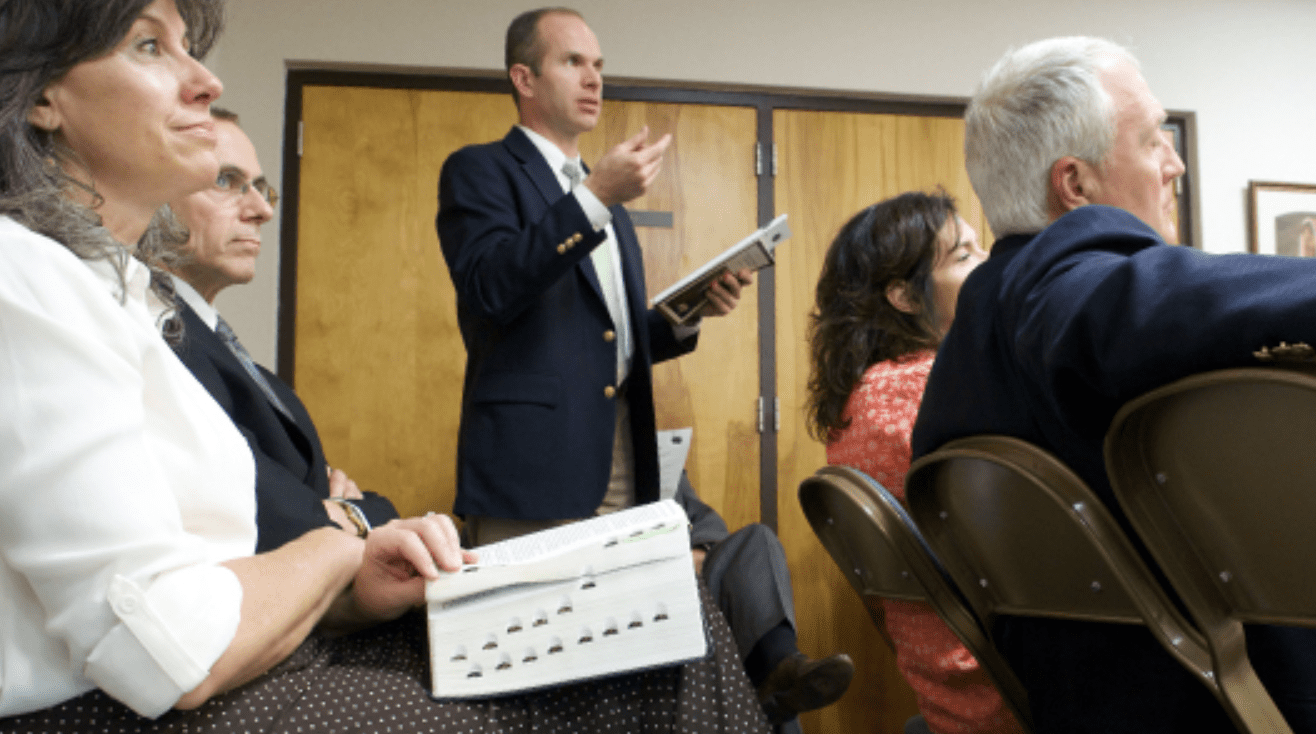 Powerful Insights from an Unlikely Place

It was the best Sunday School class for me ever. First, a little background. As Ward Mission Leader in coordination with the Bishop, we invited four women and four men who serve on our Missionary Committee to come regularly to our Gospel Principles class, so we had consistent attendance despite on and off visiting investigators and sometimes less active attendees.

The regular members were not there to argue finer points of doctrine or disperse confusion or ego, but to support the teacher and the less active or non-members in attendance. That alone made for a better class. Besides the committee members and occasional new investigators, we had two couples regularly attend who were coming back to activity.

One couple I’ll call Bill and Ellie Joneski, are in their 30’s. Neither were active since their teenage years and had lots of family who are part of the inactive or former member, tobacco chewing, cowboy culture of Spanish Fork, Utah. They were decidedly anti-LDS too. More on their story later.

The other couple who I’ll call Jerry and Jan Carr; a retired couple living in our ward. In their words, “they left the church as young marrieds” but never quite left the church alone being active “in being negative.” Jerry is a physicist and was a corporate attorney for a research company in California until he retired, at which time they moved back to Utah. He decided to work as a sheriff for a while. As a lawyer he thinks things through but didn’t think much of the church.

When I related this entire story to the Bishop in his office after church, Claire Bonner was there. Claire said that he was the first person to meet the Carrs when they moved in and Jerry declared, “I’m sure you’re LDS, but you’ll never get us inside the church so don’t try.” After lots of neighbors became good friends, there was a little thaw and about 4 years ago Jerry reluctantly accepted a calling as a home teaching companion to our Stake President.

Two years ago, he and Jan were often in the Gospel Principles class when Lee MacKey was called to be the teacher.  Then about a year ago their attendance started to be more regular. Lee is a simple guy and impossible to argue with because he’s so nice. That was the plan. And he stays to the lesson book and is prepared, yet lets there be plenty of free flow in the conversation of the class.

About October, I felt inspired to ask the Bishop to have Jerry called as the assistant teacher of the class. I know it was inspired for several reasons, not the least of which is it passed the J. Golden Kimball threshold who when asked what he thought of a certain man being called to a high church calling said, “It’s inspired of God because no man in his right mind would have thought of that.”

After all, Jerry regularly raised thorny questions in class and got upset by things like tithing, inspiration of prophets, polygamy, blacks and the priesthood, the idea that there could be a “only true church,” that Mother Teresa is better than most Mormons, and so on. But, the inspiration was there and I followed it. The Bishop had the same inspiration. Jerry was shocked as he accepted and was told he’d teach the lesson every Fast Sunday.

His first lesson was on the Millennium. “Oh boy,” I thought and calmed myself down and told myself to have faith.  My wife Elizabeth was anxious as he started off saying that there will be only one church in the Millennium and the rest of the churches would have to reform – including the LDS Church. She wanted to raise her hand and set him on the right path, but, the Joneskis weren’t there and the rest of the class just smiled and supported him.

Even though several were quite uneasy with where he was going, they gently helped move the lesson toward the truth. Still, he confessed he was nervous about the lesson so had spent a great deal of time studying “what the scriptures, prophets, the Church’s website had to say.” He also said he sought the anti-Mormon websites to see their point of view. “Oh great,” I thought. But… keep the faith! In the end it was a very positive faithful lesson.

His December and January lessons each improved. He studied nearly the entire month in preparation.  In December he discussed the nature of God and delved into an area that had been a stumbling block for both him and Jan: the idea that we can someday become gods.  He couldn’t quite get his mind around that concept yet, but came close, comparing the position of God as the President of a corporation with a lot of vice presidents and perhaps the lower minions might someday become vice-presidents.

Today’s was on Prophets, one of his pet peeve subjects. ‘This should be interesting’, I thought and the Joneskis were there as well. He began by “confessing this is a subject that has troubled me greatly, so, I read the lesson, read and reread the scriptural references, went to the LDS Encyclopedia for help, read the words of the prophets both living and dead and in the end I thought I had an understanding, but I wasn’t sure. So I called Bishop Kay and told him of my thoughts and my approach and he said he thought I was on solid foundations and ought to proceed.” That was an amazing statement from Jerry.

Carefully, like a corporate attorney, he laid out on the board in boxes to show how the Prophet, his counsellors, and the 12 apostles were the leaders of this church “or, as I relate best, to this corporation of more than 12 million people to lead. What an enormous undertaking.  I thought the corporation I worked with which had 80,000 was large and difficulty. This is something else.” He then drew a higher box with Heavenly Father, Jesus and the Holy Ghost. He drew a line from them to the box with the Prophet and apostles. He said, “they get their guidance here.”

He then drew a box labeled “us” and drew a line from the deity box to us. “We’re also entitled to revelation.” And he quoted Brigham Young on our duty to receive inspiration about what he was telling people. My eyes widened.

He then made another confession with, “I confess I don’t understand how they get that guidance because I wondered if it was all supposed to be like the First Vision. And then I read this quote from President Hinckley. An acerbic reporter asked him how he got revelation – and not a kindly question. President Hinckley then said they received it from the Still Small voice.” He read the entire quote. “Now that made sense to me.” He went on to say how in the beginning of the restored Church there were large revelations. “How could anyone think that Joseph Smith bringing forth the Book of Mormon could be anything but a magnificent revelation?!” My jaw dropped. He then led a discussion on how revelation is received today to lead the church. My jaw dropped further.

Finally he said this: “Brothers and sisters. Elder Uchtdorf said in the last General Conference that the Church leaders are just men and will make mistakes. When I was with my corporation I knew the CEO was wrong sometimes. But those were just details. Their direction was right. You will be far better taking the counseling of the Prophet…following the Prophet and ignoring disagreements on details. Follow him and your life will be good.”

I was floored and overcome. I raised my hand and said, “Jerry. I feel moved right now to tell you that you were inspired in your lesson preparation. What you just said was inspired and moving and I know it is true.” He hung his head and then looked up and said how much that meant.

Then Ellie Joneski raised her hand and bore her testimony that what he said was true. She then said, “A year ago our Jake (14 year old) was put in Juvenile Detention. We were shattered. We had just moved to our home. We weren’t in the Church and didn’t like it. Within two weeks Brother Eagles called and asked to visit us as our new Home Teacher. We didn’t want that but thought we should let him come once. Several weeks later we started having the missionary lessons. A month later our 10-year-old was baptized. Life has been difficult but has gotten so much better. The Gospel makes all the difference. We’re a family now and we just had our temple interview and will be sealed Saturday in the temple.” She then told us that after the Bishop’s interview, she knew she needed to go make amends with her sister. Ellie said her sister was active and quite negative toward the Joneski’s cowboy life. Ellie drove over to see her to try to mend their relationship. Her sister was still bitter and wouldn’t accept the apology, “but the Gospel teaches us to forgive, even if they don’t accept, so I will not let this get in the way of my joy in the gospel.” Everyone, including the Carrs, were deeply moved and tears flowed freely.

As I related this account to the Bishop after church, and Claire there, Claire said, “I can’t believe that’s the same Jerry Carr. I just can’t believe it, except that is the way the spirit works.” Said the Bishop, “What a great class that was.”

Yes, that was a pretty wonderful Sunday School class.

PS. I recently ran across this quote from Elder Tad Callister that fits:

Unfortunately sometimes we are so "careful"about being sure we teach nothing but true doctrine, that we steer very wide away from anything that might challenge our understanding.

BEAUTIFUL!!! Thank you so much for sharing.