"One Day Italy Will Have a Temple": The Prophetic Promise Made to a Young Catholic Woman in Rome | Meridian Magazine 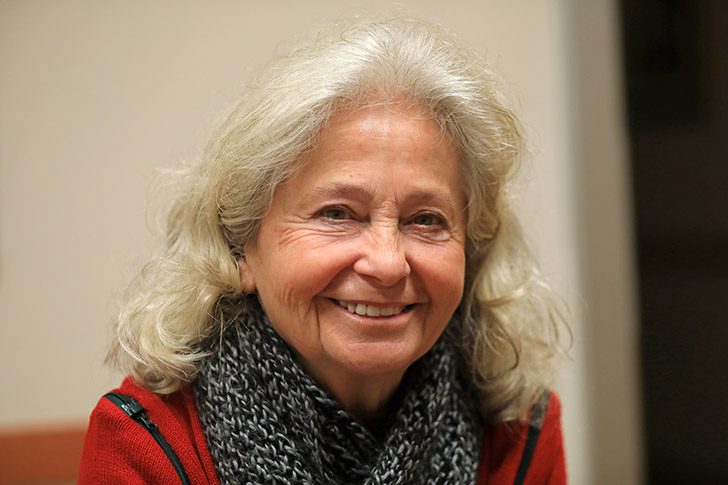 “One Day Italy Will Have a Temple”: The Prophetic Promise Made to a Young Catholic Woman in Rome

When I met Cecilia Panebianco in a little chapel in Rome, her radiant face told me she had a story. Though she traveled two hours by bus to meet us, she was the epitome of Italian warmth. With every photo taken she exclaimed, “Oh, Mama Mia!” in embarrassment and with every sentence of her story she melted into tears. Her presence was angelic, as was her white hair, and everything about her marked her as a disciple of Christ. We sought her out knowing that she and her family have been stalwarts in establishing the Church in Italy, and her devotion was clear from the moment we saw her. That is what makes the beginning of her story so very ironic:

As a teenager, Cecilia walked through the Piazza della Repubblica every day as she left her Catholic school run by nuns, passing the Latter-day Saint Elders in their white shirts and ties. Though it made for extra walking, she took large circles around the Roman square to avoid having to talk to the missionaries. She was satisfied. She knew her religion. She wasn’t looking for anything more.

After nine months of her long detour and a year in New York studying English, it was 1971 and she found herself in the Piazza once again—this time with her 15-year-old American cousin. As if no time had passed at all, she spotted the Elders again, standing in the square trying to talk to strangers. From their vantage point on the steps above, the two girls looked down upon the missionaries. “Who are they?” her cousin asked. Cecilia told her they only wanted to discuss religion and “if they talk about religion and are American, for sure they aren’t talking about our religion.” With some coaxing, Cecilia’s cousin convinced her to go talk to them despite her hesitations.

Looking back after so many years, Cecilia’s eyes filled with tears, knowing the only reason her cousin was there on holiday in Rome was to take her to the missionaries. She would have never changed her detour or talked to the Elders if her cousin hadn’t been there to persuade her.

Elder Balzotti, whom she referred to as “poor guy”, greeted Cecilia and told her about the Book of Mormon. He said that they could either lend her the book or sell it to her. Still not convinced, she took it and said they would borrow it, thinking very little of it. As the two girls started walking away, Elder Balzotti called after them saying, “Hey, please, if you’re not interested, don’t throw that book away. Please give it to someone else.”

Cecilia’s heart sunk when she heard his words, as if the cold wall she had put up had suddenly been shattered. He could see that they weren’t interested, but he mustered the courage to call after them anyway. Though she did not show it to the “poor guy”—the rejected Elder—she felt completely ashamed, and when she arrived home, his words echoed in her mind. She felt compelled to open one of the pamphlets he had given her about Joseph Smith and read.

“Mama Mia! Yesterday we went to the moon and now this? Do we still believe on these things?” She thought the whole thing about Joseph Smith and a vision was a fantastic fable. As Cecilia reflected, she said incredulously, “I was Catholic and I used to go every Sunday to church. I believed in miracles, yet this is what I thought.” Through disbelief, the Elder’s words still echoed in her mind, and so she read the next pamphlet about the apostasy.

At this point in the story, Cecilia’s emotions consumed her as she tried to express herself to me. After successfully avoiding the missionaries for so long and deciding she was satisfied with what she knew, she was awestruck at what she learned about the apostasy. She used both hands and intertwined her fingers as she explained that she had never even thought about how history and religion fit together. With this new-gained knowledge, she realized that she wasn’t satisfied. Suddenly, she had an endless list of questions, and her next source of information would be the Book of Mormon. The day after, she went and paid the Elders for the book before she left for a month vacation.

While she was gone, she told herself she would read the Book of Mormon for two hours every night. When she got to 3 Nephi 11, she exclaimed, “I read about my Jesus!” She believed, and as she read about Jesus being on a new continent, she cried for joy every night.

As soon as she returned to Rome, she went back to the Piazza della Repubblica to tell the Elders about her testimony. She couldn’t hold back her excitement and asked in astonishment, “But if these things are true, why don’t you go on TV? Why don’t you go on the radio to say these things? Why don’t you talk to the religious leaders and tell them Jesus came back again to let us know that the Church was not on the earth and this was the real Church?” Cecilia’s heart had completely changed, and instead of casting an eye of disbelief upon the doctrines of the Church, she now could not believe she hadn’t had this knowledge before and that it wasn’t more widely known. The Elders then told her something she would never forget: “Don’t worry, one day Italy will have a temple.”

Looking back, Cecilia can see that was something of a prophecy. That’s exactly what the Elders were trying to tell the people in the square—one day, there would be a temple in Italy, and they should rejoice in that good news.

The sister missionaries began teaching her, but her Catholic mother did not approve of her religious exploration. Even after attending a baptism at the Church, and her mother’s tears clearly showed she felt the Spirit, she remained firm that Cecilia would not get baptized. One day, after two months of teaching her, Cecilia’s mother finally told the sisters through tears that Cecilia could be baptized. Her mother joined the Church two months later.

No longer was she the girl who took extra steps in the Piazza, determined to evade any religious conversations. She not only listened to missionaries, but she now felt strongly she had a mission to perform. The whole world needed to know this truth that she, her mother, and her sister had discovered.

When they all sat down, he looked at Cecilia’s mother and said, “Sister Panebianco, I want you to know that the Lord has called one of your daughters to go on a mission. What would you say?” Cecilia described her mother as a tough woman with a big heart. Cecilia’s mother looked at the mission president and simply said, “Yes, which one?” Cecilia was astonished at her mother’s response. “He wants Cecilia to go,” the mission president said.

He made it clear that he wanted Cecilia to go home and think and pray about it for two days and then call him. He repeated himself three times. But each time, Cecilia said through tears, “President, how could I say no? You tell us that the Lord wants me to go. How could I say no? My answer is yes right now.” She soon received a call to serve in Milan, Italy.

That eager willingness to serve the Lord remains her sincerest motivation in all she does. Her four children all served missions and have married in the temple. Her oldest daughter Sara is wife to Elder Dini Ciacci, an Area Authority in Italy, and her other children serve in capacities in Primary, Relief Society, Institute, and as the secretary of the Temple Committee.

Cecilia wept as she told me her feelings about the new temple in Rome and the blessing it will be to her family. It really is true what the Elder told her nearly 50 years ago. A temple has come to Italy! She is so excited for the temple to permeate her whole life. Going to the temple in Switzerland was an anomaly—a week of heaven removed from “real life”. Now, though the Rome Temple may be a two-hour journey one way, she has made it a goal to go to the Rome Temple and experience a piece of heaven every day, taking that piece of heaven with her as she goes about her daily life.

It was clear to me as we kissed each other’s cheeks and parted ways that she already does take a piece of heaven with her wherever she goes.

What a thrill it was for me to read this article about Cecilia and her blessed family. It was in 1972 as a very new missionary when I was honored to meet Cecilia and her mother and sister Emma in their home. I was stirred by their newly planted testimonies of the Restored Gospel. They were so helpful to Anziano Allen and me in their support as member missionaries. Thank you for stirring up very fond and unforgettable memories.

I met Cecilia at the Rome Temple on September 4th of last year. My husband and I were there for his business trip and we were able to stop by on our way. We felt such love for her and the wonderful couple that was there. We shared stories for hours and I felt like they were family. I wanted so badly to bring my 4 children back for the open house (knowing how unlikely that was). She kissed my cheeks as I left and gave me the best hug. I felt like I was leaving family. They had shown us so much love and kindness! Later that day we had everything stolen when we visited the tower of Pisa. I was devastated! Heavenly Father had sent me angels to make me stronger before that incident. Our homeowners insurance covered the stolen items that we have not entirely replaced yet. Then ticket prices dropped to the lowest I have ever seen them and we were able to use the rest of the money to take our children back to Italy for the Temple Open House. The second time we attended I walked into the baptistry and there she was! Cecilia, our angel! Everything had come full circle! We cried as we embraced her told her our story and introduced her to our children! It was one of the best experiences of our lives! We cannot thank her enough for being a part of that.