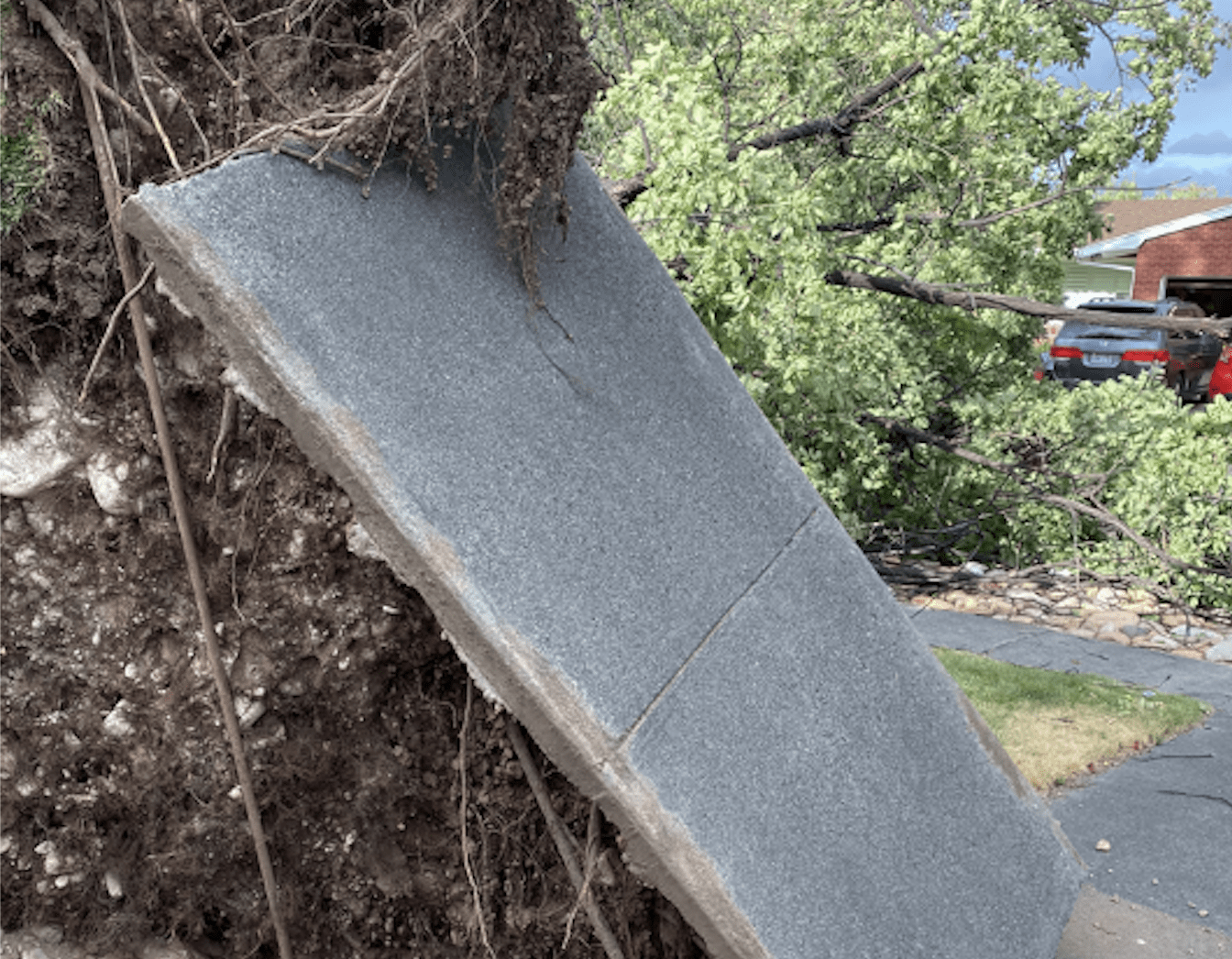 On September 8, 2020, hurricane force winds blew down a sixty-three-year-old elm tree (our son counted the rings) that along with its sister tree have stood as sentinels to the side of our home for the forty years we have lived here. Fortunately, it fell west. If it had fallen south, it would have landed on the house. Photos made the local news.

The street was completely blocked.

The roots snapped and were exposed.

Chunks of sidewalk and grass came up with the roots.

A local television station reported: “Utah experienced the equivalent of a Category 2 storm; one the National Hurricane Center classifies as a storm that causes extensive damage at landfall” (www.fox13now.com/weather/utah-experienced-a-hurricane-kind-of). Technically, it wasn’t a real hurricane because there was no rain or storm surge, and the winds were not sustained. Real hurricane or not, it did real damage.

The wind was so loud that we did not hear the tree fall. When daylight came, even though the winds were still about forty miles per hour, three neighbors came with chain saws. Many teens and adults worked throughout the morning, dragging cut branches into piles and stacking logs on the sides of the street. Finally, a lane had been cleared and most of the branches had been cut off the fallen tree. Everyone was standing around the tree assessing the work that still needed to be done. About ten people were within a few feet of the tree.

Then with no warning, the tree sprung back up staight. The fact that no one was hurt was miraculous. We were dumbfounded. Most the roots had snapped off, but some must have remained attached with enough tension to pull the tree upright again.

Today a tall stump is all that is left, except one branch with a few leaves.

There is a parable in this.

Members of the Church who have set their faith and testimonies down can be likened to this tree. We may look at them as permanently down. We wonder and ask ourselves how and why this happens. We think that perhaps these elect had their spiritual roots severed by the winds of popular trends, by the lure of pleasure and leisure, or by false philosophies and antichrists.

Were their roots shallow? Did they fail to nourish their roots? Did the weight of past offenses or unanswered questions sprout and grow faster than the roots could support, which is what happens in Jacob 5:6, 66, 73. In my mind, the worst scenario of all is that I was negligent, too preoccupied with my own life to be supportive and nurturing enough. If only I had invited them to more ward events. If only I had taken them more plates of treats. Perhaps I offended them. But whatever the cause, when the winds blew and beat upon [these precious children of God]; [they] fell and great was the fall” (3 Nephi 14:27). We mourn our loss. We miss each one.

But like my tree, I think most who have left the Church have some roots attached and perhaps a straggly, struggling branch of positive memories yet survives.

Several years ago a neighbor who had never come to church but her name was in the ward directory came to ask my support for a neighborhood problem. I don’t usually wear a CTR ring, but this day I did. As we were talking, she grabbed my hand and looked with longing in her eyes and said with emotion, “Oh, Primary. Those were the days.”

One evening as I was walking to Relief Society, a neighbor passed me going the opposite way. We greeted each other and she asked me where I was going. “To Relief Society,” I said, not knowing if she knew anything about Relief Society. I saw a hint of nostalgia in her eyes as she said: “I went to Relief Society with my neighbor a few times when my children were young. I still remember the feeling. I should have kept going.”

When Richard and I were first married, we lived in an apartment next to Beth and Harry who managed the apartment complex. They had raised their children and befriended us as an extension of their family. Beth told me they had been married in the temple but had stopped going to church many years ago. One Wednesday morning she knocked on our door. She looked at me and said, “Get dressed. I am taking you to Relief Society. You need Relief Society in your life.” I was startled but complied. She went with me several more times until she trusted me to keep going on my own. (At this time Relief Society was held on a weekday morning.)

In Church history we read accounts of prominent members who left the Church and came back.

Oliver Cowdery separated himself from the Church for ten years. When he returned, he said: “Brethren, for a number of years, I have been separated from you. I now desire to come back…. I seek no station. I only wish to be identified with you” (Who’s Who in the Doctrine and Covenants, Susan Easton Black, Bookcraft, Inc. 1997, 76).

Martin Harris detached himself from the Church for thirty-two years. He left Iowa and came to Utah at age eighty-eight where he was rebaptized. “Upon gazing at the temple and tabernacle and the beautiful Salt Lake City, he exclaimed, ‘Who would have thought that the Book of Mormon would have done all this’” (IBID, 127).

W.W. Phelps was excommunicated in March of 1839 and rebaptized fifteen months later. He wrote a letter to Joseph Smith of regret and repentance. The Prophet replied: “Believing your confession to be real and your repentance genuine, I shall be happy once again to give you the right hand of fellowship, and rejoice over the returning prodigal. Your letter was read to the saints last Sunday and an expression of their feeling was taken, when it was unanimously resolved that W. W. Phelps should be received into fellowship” (https://www.josephsmithpapers.org/paper-summary/letter-to-william-w-phelps-22-july-1840/1).

When these men left, they were not left alone. They were extended the hand of fellowship with letters, visits, and prayers. These men—some sooner, some later—accepted the loving invitations and came back.

One Sunday a sister who rarely stayed for Relief Society raised her hand and said, “I am here today because two women in this room wrote me notes telling me they missed me.”

Another Sunday in Relief Society a woman who hadn’t been to church in several years raised her hand at the close of the lesson and said: “I’m so thankful I came today. I have many questions about the Church, but I realize from all of your comments that you study the gospel, something I haven’t been doing.”

Last year my ministering assignment changed to include a woman I offended many years ago. I’ve written her letters of apology, no response. I have taken her treats, no response. I remember her birthday, no response. The Relief Society secretary noticed the look on my face when I saw that I was assigned to her. “Can you accept the assignment?” she asked. I said, “Yes, but the chance I will get into her home is pretty much zero.” “Well, the secretary said, “You have a secret weapon.” “What’s that?” I asked. “Prayer,” she answered. “You can pray for her.” I did pray for her for over a year when I turned a corner in the grocery store and there she was. You can imagine how I felt when she spontaneously hugged me and said, “Oh, Marilynne, it’s so nice to see you.”

I take courage and gained insight from President Dallin H. Oaks when he said that he reads many letters and reviews requests from former members who want to return to the Church. By doing this, he saw a common pattern identifying why they left in the first place. He said: “I share the conviction that has come to me from many letters and by reviewing many requests to return to the Church after name removal or apostasy. Many of our members do not fully understand this plan of salvation, which answers most questions about the doctrine and inspired policies of the restored Church” (www.churchofjesuschrist.org/study/general-conference/2020/04/51oaks?lang=eng).

Rarely is a member of the Church going to say to someone who has left the Church, “You left the Church because you don’t understand the plan of salvation. Let me explain it to you.” Most often this happens incrementally as the person is willing to let God prevail is his or her life. But we do have opportunity to teach the plan of salvation to our children and grandchildren, both as a natural part of conversation and in more formal settings. These are the best years to plant testimony and hopefully send down roots in the next generation.

But before we can teach the plan to those who have left the Church, their roots need awakening. As we pray for them and ask for direction, ideas will come. Prayer is our secret weapon. We can pray to love them as they need to be loved and to respond to their needs under the Spirit’s direction.

Despite a very shallow root structure, just five to six feet deep, giant redwood trees can grow to be 350-feet tall. How is that possible? “They make up for it in width, sometimes extending up to 100 feet from the trunk. They thrive in thick groves, where the roots can intertwine and even fuse together. This gives them tremendous strength against the forces of nature. This way they can withstand high winds….” (sunnyfortuna.com/explore/rewoods_and_water.htm).

High winds and other disasters are forecast for our future. Survival is a spiritual matter according to President Russell M. Nelson. The truth of this statement cannot be repeated often enough: “In coming days, it will not be possible to survive spiritually without the guiding, directing, comforting, and constant influence of the Holy Ghost” (www.churchofjesuschrist.org/study/general-conference/2018/04/revelation-for-the-church-revelation-for-our-lives?lang=eng).

It is the Holy Ghost that reminds spiritually fallen trees of their roots and gives them the desire and courage to intertwine with the Saints and fuse with Jesus Christ. It will happen to every child of God whether in a few weeks, months, years, or in the hereafter. At some point, everyone will acknowledge Jesus Christ is their salvation, their happiness, their deliverance from death, their mercy, their restoration, their redemption. “He will rule as King of Kings and reign as Lord of Lords; and every knee shall bend and every tongue shall speak in worship before Him” (The Living Christ).

The thought I had was that the tree sprung upright after neighbors had helped clear away the overgrowth. The friends helped and then the tree ( lost person) was then able to stand again.