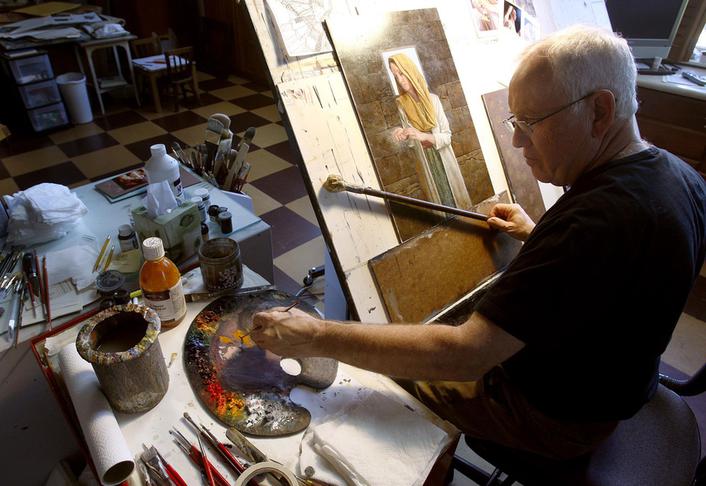 The imaginative images of myths, fables and fantasies depicted by James C. Christensen will live on in myriad mediums, despite the death of the artist recognized for his works of fantasy and faith.

Christensen, a world-renowned LDS fantasy artist and former BYU art faculty member, died Sunday, Jan. 8, 2017, in Orem after a prolonged battle with cancer. He was 74.

Born Sept. 26, 1942, in Culver City, California, where he was raised, Christensen grew up playing in the MGM Studios backlots. His first art supplies were purchased at Disneyland’s Tomorrowland, and he recalled his first painting attempt in high school as “horrible.”

He studied at Santa Monica City College, UCLA and BYU — giving oils a try as a sophomore there and later earning a master of arts degree at the Provo university. His early post-college career included working as a freelance illustrator and a California junior high school art instructor. He later joined BYU’s art department faculty in 1976, teaching there until retiring in 1997.

“The BYU Department of Art is saddened by the passing of renowned artist James C. Christensen,” department chair Gary Barton said. “Jim, as he was known by his friends … was a skilled and creative artist with a positive and gregarious personality. He was a popular teacher, and during his tenure at BYU, he made many valuable contributions to the department and the university.”

Christensen saw himself not as the “fantasy artist” label given him, but rather as an artist who paints the fantastic.

We were in the sames Ward in Culver City... Jim came over to our house for art lessons from my dad in the early 1960s... we had a large family so the class was in the garage where they would remain undisturbed... a few other ward members occasionally joined class too but Jim had some talent... I remember seeing some of his early work back then and also so exited as he became widely known as an artist...my dad Vernon Melander was also a graduate from BYU art dept back in the late 40s and was a professional artist in the field of advertising with big firms in LA... Later in Boise I shared the memories of Culver City with James at a local gallery he showed with... His smile was just the same as I'd remembered so many years ago!

He also painted the most gorgeous, realistic painting of the Savior in Gethsemane. When I first saw it, I could not believe that it was the same artist who painted his doodles!