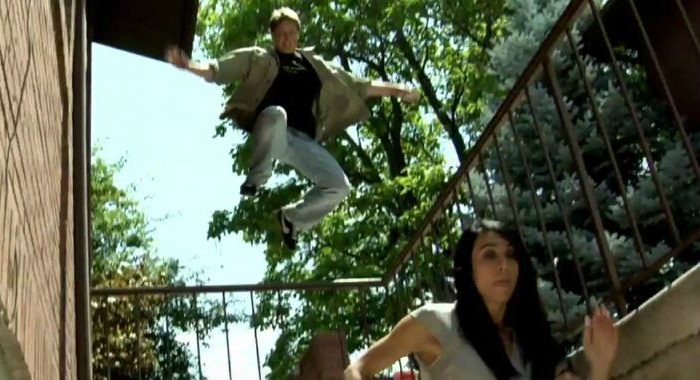 In 1999 I was a die-hard Jackie Chan fan, seventeen years old, and on the student council of our large LDS seminary in Mesa, Arizona. With a love of the Gospel, a soft spot for cheesy seminary videos of yesteryear, and a profound desire to impress girls through stunt-work, my friends and I set out to create something utterly unique: a Mormon martial arts comedy.

I’d had some experience in this regard; during the previous year I starred in a Mission Impossible parody for the seminary that required some stunt-work. The reaction was positive from the 1200-plus students who viewed it. Building on the success of that film, we crafted NiceGuys’ First Strike, a 40-minute (including outtakes) movie about respecting women and honoring the priesthood…which had a ten minute parkour fight sequence. We kept our values in check: the action was silly instead of brutal, and the heroes acted only out of self-defense.

That film was a minor hit with the seminary students, and as I’ve grown older it has been enjoyed by my children and the youth of the Church with whom I’ve labored. On its heels came a slew of Mormon-made (and occasionally LDS-themed) action comedies produced in high-school and at Brigham Young University, building up to the feature-length “24” fan-film CTU: Provo (co-starring Donny Osmond).

These movies, along with over 40 sketches performed during with BYU’s Divine Comedy (where many Studio C cast members got their start) and segments from The KJZZ Movie Show, are now available for families to enjoy on my Vimeo and YouTube channels. As part of my new Your Family Expert brand, these channels will also feature marriage, dating, and parenting advice as time goes on. For now, they include the following.

Jonathan Decker is a licensed marriage and family therapist, as well as a film critic with The KJZZ Movie Show. His book 250 Great Movies for Latter-day Families is available in paperback and Kindle.