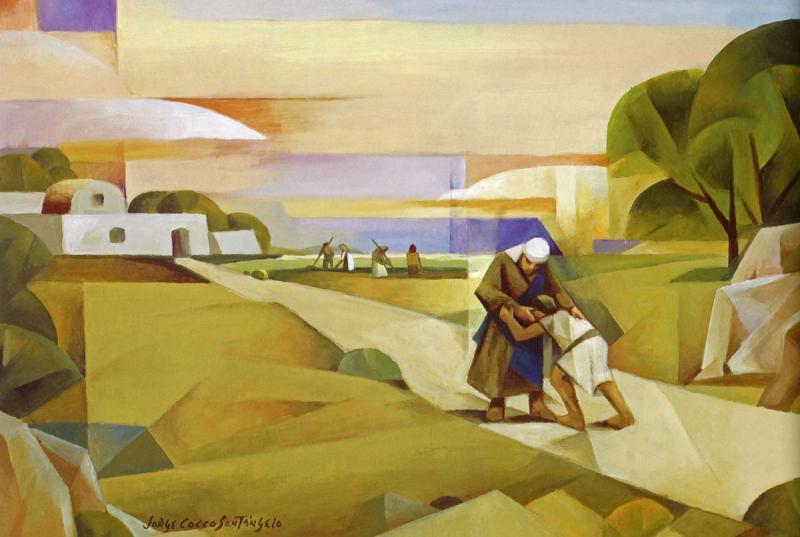 View the post on Book of Mormon Central. Cover image: “The Prodigal Son” by Jorge Cocco.

One of the most powerful and memorable parables of the Savior is that of the Prodigal Son. This beautiful parable teaches of the remarkable love our Heavenly Father has for each of us, and of the compassion and forgiveness awaiting all who return unto Him through the redemptive power of Jesus Christ.

As Jesus sat teaching His disciples, we are told that several tax collectors and sinners gathered around listening to Him. The Pharisees, who always looked for moments to judge the Savior, muttered “This man receiveth sinners, and eateth with them.” Ever the teacher, Jesus then gave three beautiful parables: the parable of the Lost Sheep, the parable of Lost Coin, and the parable of the Prodigal Son. Each of these parables showed the Pharisees why the Savior would willingly associate with sinners, and why He searches, and rejoices whenever the lost are found.

In the parable of the Prodigal Son, Jesus presented a story of a father and his two sons. One day, the younger son requests from the father his inheritance. The father remorsefully complies, and the son packs up all that was his and abandons his father, his land, and his family. On his own, and with a notable fortune, the son sinfully rejected and squandered all his father had given him, leaving himself completely unprepared for the famine that hits the land.

Desperate and destitute, the son takes a position on a pig farm—something that any respectable Jew would have detested because swine were considered unclean according to the Law of Moses. The young man, now penniless and starving, remembers the goodness of his father and the kindness and respect he always showed his servants. Though he feels unworthy to approach his father as a son, perhaps his father will take him back as a servant.

Filled with remorse, humility, and probably great trepidation, this prodigal son begins to make his way home. With his father’s house still off in the distance, the son sees his father running, arms outstretched, calling to him. The father falls upon his son with a joyful and loving embrace. He will hear nothing of the young man’s plan to be a servant in his house, but instead the father immediately adorned his son with the clothes and jewelry befitting a guest of honor. The father then turns to his servants and commands that all prepare for a special celebration, for his much-loved son has come home at last!

Like the prodigal son, we have all, in one way or another, turned from our Heavenly Father and disregarded our place as His beloved children. And, we will all know, at some time, the desperation to erase our mistakes and be at one with our Father again.

But, we may ask, is such a reception, like that of the prodigal son and his father, possible for us? Will we too find our way back to the joyous embrace of our Father in heaven? Like the father in the parable, our Heavenly Father cannot simply come and get us in our sins and force us to live with Him. We, like the prodigal son, must choose to “go home again.”

But how do we do that? The Parable of the Prodigal Son, with help from the Book of Mormon, draws a clear map back to a loved and honored place with our Eternal Father.

First, just as the Savior taught that the disobedient and wasteful son “came to himself” and recognized that his only salvation was making amends with his father, we too must, as the Book of Mormon prophet Alma taught, be “convinced of our sins” (Alma 24:9) and admit that our actions have caused us to fall out of step with God.

Second, we must feel genuine remorse and take responsibility for the actions that lead us away from our Father. This is, of course, no easy experience. Sometimes we will be brought low to remember our Redeemer. But it was in the lowest of lows that both the prodigal son and Alma the Younger first understood their way out. Extreme hunger reminded the prodigal son of his father’s fair treatment of his servants. For Alma, it was feeling close to destruction and “racked with all [his] sins” (Alma 36:12) that reminded him of his father’s teachings of the coming Savior. Both of these moments of clarity led Alma and the prodigal son humbly along the path to the next step of repentance, which is that we must work to make a permanent change.

The prodigal son resolved to go to his father, admit his sins, and willingly live out the rest of his life in submissive servitude. The Book of Mormon teaches that anyone who will confess their sins and “repenteth in sincerity of heart” (Mosiah 26:29) will be forgiven. Actively trying to be and do better helps each of us see the mercy extended to us by our Savior Jesus Christ. The next step then is to accept that mercy.

The Savior taught that it is essential to receive those gestures of forgiveness our Father offers us, knowing, as the prophet Enos taught, that “God [cannot] lie” (Enos 1:6). So, when our Father extends His forgiveness, we should accept it, and let our “guilt [be] swept away.”

The prodigal son’s planned servitude was immediately brushed off by his father as he offered his son a cloak, shoes, and ring, all deeply symbolic of the high position the father had in mind for his repentant son. Alma the Younger’s words paint a picture of what the prodigal son and each of us can feel at the moment we accept the reconciliation Jesus offers, “and now, behold…I could remember my pains no more…oh and what joy, and what marvelous light I did behold; yea, my soul was filled with joy!” (Alma 36:20)

Finally, Jesus taught, through this masterful parable, the need to rejoice with others in the goodness and forgiveness extended to us by our Heavenly Father. In this parable, the father not only welcomes his prodigal son home, but he orchestrates a joyous celebration with all the family. We likewise should rejoice and be glad in the forgiveness, restoration, and ultimate exaltation of our repentant brothers and sisters.

How wonderful it is to know that like the father of this parable, our loving Heavenly Father is always earnestly seeking for and awaiting our return. How beautiful to know that our Father and Savior Jesus Christ will likewise run to us and embrace us before we have even made it back home to His presence!

This video is based in part off of a brand-new book called The Parables of Jesus: Revealing the Plan of Salvation, written by John and Jeannie Welch. The book includes incredible insights, and beautiful artwork by Jorge Cocco Santángelo. All royalties for this book are being donated to charitable causes.