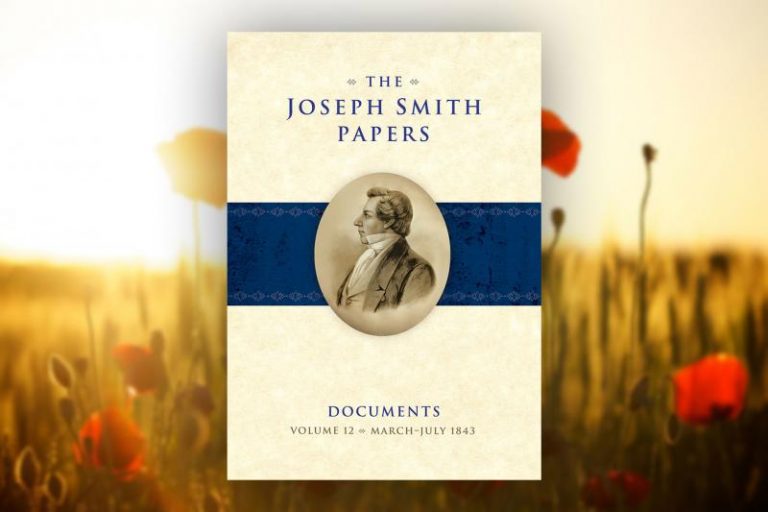 Last week saw the publication of the latest volume of the ongoing Joseph Smith Papers Project. According to a press note released by the Church Historian’s Press, Documents, Volume 12: March–July 1843 “reveals a period of astonishing busyness as Joseph Smith grappled with legal challenges while he continued to fulfill his leadership roles in the church and the city of Nauvoo.”

This volume features ninety-six documents, including correspondence, accounts of discourses, blessings, legal and financial records, and minutes of meetings. Key texts include documents and discourses related to the state of Missouri’s third attempt to extradite Joseph Smith, documents illustrating the growth of the church outside Nauvoo, and documents illuminating Joseph Smith’s expanding understanding of eternal and plural marriage. The texts presented in this volume, with their detailed historical annotation, make this book an important resource for those seeking a more thorough understanding of the life and leadership of Joseph Smith.

As highlighted by Riley M. Lorimer—an Associate Editorial Manager at the Church Historian’s Press—at a virtual blogger event held on Wednesday, April 21, 2021, “Civic and community matters run throughout the whole book.” Many of the papers featured Documents, Volume 12 relate to Joseph Smith’s civic roles and legal battles. “During these months, demanding civic and ecclesiastical responsibilities occupied his attention, as did ongoing legal entanglements with the state of Missouri.”1 These sources will prove invaluable for historians and other researchers interested in better understanding the Prophet’s method of governance and his legal history.

Also of interest are several documents reproduced in the volume that relate to Joseph Smith’s expanding teachings on eternal and plural marriage during the last years of his life. “Polygamy has always been a hot-button topic; it’s very much in peoples’ consciousness,” remarked volume co-editor Robin Jensen at the blogger event. “I hope what people take from this volume is that the contemporary record is quite sparse on the day-to-day, lived experience of those who practiced plural marriage. We also know that polygamy was an evolving practice. Joseph introduced it in Nauvoo and tried to make sense of things. It is wise at this point not to make too many strong conclusions about polygamy based on the limited records we have.”

Two of the documents in this volume related to plural marriage include a handwritten blessing Joseph Smith made for one of his plural wives, Sarah Ann Whitney (daughter of Newel K. and Elizabeth Ann Whitney and sealed to Joseph Smith on July 17, 1842), and the oldest extant copy of what is now section 132 of the Doctrine and Covenants. As explained by the volume editors in the introduction,

Joseph Smith also expanded the practice of plural marriage during the months covered in this volume. Although the origins of plural marriage among the Saints are obscure, later accounts state that sometime in the 1830s Smith received a commandment from God to enter the practice. The fragmentary nature of the extant evidence precludes a full reconstruction of the emergence of the practice and its development in the early 1840s. The small circle of Latter-day Saints who participated in the practice in Nauvoo understood plural marriage to be part of the “restitution of all things” that would occur in the “dispensation of the fulness of times.” This restoration would include not only the spiritual gifts of the New Testament and the church of Jesus Christ but also Old Testament practices, roles, and ideas, such as temple worship and priesthood, prophets and patriarchs, and the marital system of the biblical patriarchs. During the first half of 1843, Joseph Smith significantly broadened his practice of plural marriage, as he was sealed to about a dozen women during these months, bringing the total number of his plural unions to more than twenty. Featured in this volume is a blessing to Sarah Ann Whitney, who was sealed to Smith as a plural wife in 1842. The blessing is a rare example of a contemporaneously recorded text, written in Smith’s own hand, that attests his personal practice of plural marriage.

This volume also features a lengthy revelation on eternal and plural marriage. In May 1843, Emma Smith reluctantly accepted her husband’s practice of plural marriage, conditioned on her ability to choose the women to whom he was sealed. This acceptance, however, was short-lived, and by late June 1843 she again opposed the practice. The following month, on 12 July 1843, Joseph Smith dictated a revelation that outlined the need for everlasting marriage covenants, the nature of the sealing power, and the biblical basis of plural marriage. Although initially dictated in the immediate context of the situation with Emma, the revelation explicated the divine origin of these teachings, providing the doctrinal and textual foundation of the Saints’ practice of plural marriage over the next half century.2

Concerning the Prophet’s blessing to Sarah Ann, commentary provided by the editors of the new volume indicates how “few of Sarah Ann Whitney’s own writings survive, and none is known to illuminate this blessing from her perspective.” Nevertheless, “this document, along with a select few other records likely important to the family, was isolated from that larger collection [of family papers], suggesting that Sarah Ann, her mother, or other family members assigned those select documents a special status.3 The excellent introductory commentary and annotations to the manuscript of section 132 featured in Documents, Volume 12 also provides important context on both the revelation itself and Joseph Smith’s practice of plural marriage in Nauvoo.4

Only a few of the texts in Documents, Volume 12 pertain to the Book of Mormon, but one in particular is noteworthy. A letter published in the Times and Seasons in May 1843 features a discussion of the origin of the word “Mormon.” Although the letter was ghostwritten by William W. Phelps, it was published with Joseph Smith’s signature and, evidently, his approval.5 The letter was written in response to popular anti-Mormon authors who attempted to associate the name Mormon with the Greek word mormo or mormon(os), the name of an horrible spectre in Greek superstition used by mothers to frighten their unruly children.6 The letter featured in the print version of Documents, Volume 12 (but not yet on the JSP website) gives Joseph Smith’s rebuttal to this claim, who argued that the name derived from a contracted bilingual portmanteau of the English more (mor) and the Egyptian mon (“good”), making Mormon mean “more good.” Since this letter was written in response to the widespread anti-Mormon yellow journalism of the day, it is difficult to know just how earnest or facetious was this definition offered in the letter. Although it strikes a somewhat tongue-in-cheek tone,7 and should therefore be taken with a grain of salt, it nevertheless does reveal some of Joseph Smith’s own speculative linguistic musings (and perhaps sense of humor).

Documents, Volume 12, edited by David W. Grua, Brent M. Rogers, Matthew C. Godfrey, Robin Scott Jensen, Christopher James Blythe, and Jessica M. Nelson, is now available for purchase at Deseret Book and other retailers or directly from the Joseph Smith Papers website. Three more additions in the Documents series will round the series out to fifteen published volumes, while volume five of the Revelations and Translations series, Original Manuscript of the Book of Mormon, is planned to be released later this year.

7.While reading the letter, one is reminded of Hugh Nibley’s amusing and farcical satire “Bird Island”.