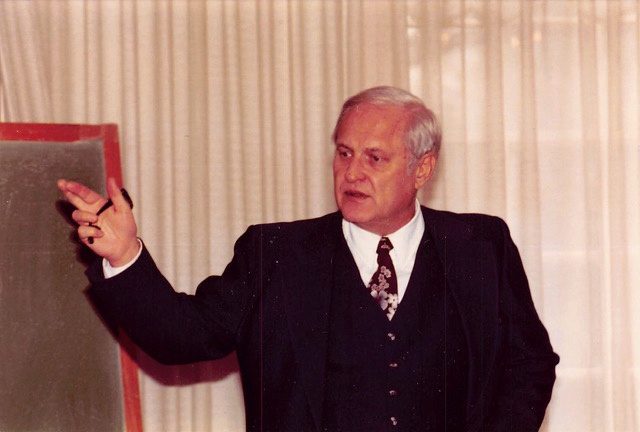 For four decades, Pulitzer Prize winner Jack Anderson was the foremost investigative journalist in the nation, uncovering some of the biggest stories of his time. We are pleased to run this Father’s Day tribute to him because he was a special friend to Meridian Magazine and to us personally, helping to launch the publication 22 years ago. With all of those clamoring for his time and reporting, he gave us the unique gift of writing a monthly column that was distinctive to this magazine. He cheered us on when we were just beginning and stayed up late into the night with us describing the perils and joys of being on the frontlines of history. Jack Anderson was a household name in America, but he took time to pay attention to two people who, at that time, were starting a magazine with no audience and no financing. His confidence in us helped us to believe we could do it. We truly love Jack and second all that his daughter, Tanya, has to say about him in this article. Though you are no longer with us, Jack, we hope you know how much we love you still. -Maurine and Scot Proctor

A long, black limousine pulled up just after the school bus dropped us off at the top of the court. As the back passenger window went down, surprisingly the face of President Richard M. Nixon emerged. Smiling, he waved to us. My friends ran to the limo excitedly. Spurning on my heels I turned my back on this United States President and stomped off. Our family, in my eyes, was at war with this President, who put my father’s name on his infamous Enemies List.

I couldn’t wait to tell my dad how I turned my back on Nixon and gruffly walked off. His response surprised me. My father, Syndicated Columnist Jack Anderson, speaking firmly with his eyes locked on mine, said, “You never turn your back on the President of the United States in his presence. Even if you do not respect the person, you always show respect to the office they stand for.”

As I reflect upon the life lessons taught by my father through the lens of experience and maturity, I pause as I consider their meaning. The seedlings of my testimony sprouted from both my parents. Their influence and gentle guidance were the buds of my faith in Jesus Christ and fortitude in life. My mother gave me a love for family history. My father, through the Book of Mormon class he taught, gave me a love for the scriptures. I often saw him at his desk with the scriptures and several books opened as he studied and prepared his weekly lesson.

My father, who often worked from home in the mornings and evenings, usually left his office door open. In fact, I frequently drifted off to sleep and awoke to the distinctive sound of the clattering keys of his manual typewriter. In my youth it was often my alarm clock. Yet, when the office door was closed it became the unofficial “Do Not Disturb” sign.

Even though I was only eight years old, I knew that when my father’s office door was closed it meant my eight siblings and I should not enter unless there was a real problem. So, I took a deep breath and slowly turned the knob and peeked in. He was on the phone which was the second Cardinal Rule of when not to bother him. I was upset and decided to bravely cross the threshold.

My father looked at me and calmly said, “Senator Humphrey, could you excuse me just a moment.” It was 1968 and I was aware that Senator Hubert H. Humphrey (who was then the Vice President) was running for President of the United States. With my dad’s hand over the mouthpiece, he turned to me and gently asked me what I needed. With a frown on my face, I succinctly told him my problem. He then asked me if it would be alright if he finished his phone conversation. I shook my head “yes”; then he invited me to wait in the overstuffed, black leather Lazy Boy chair that rocked and asked me to close his office door.

To this day I cannot recall what I was upset about, however, I do remember my father, during his busy day and important phone call, took the time to hear my heart’s complaint. When I related this tale to my sister, Cheri, she told me of a similar story except when she interrupted his phone call, it was President Elect John F. Kennedy.

Cheri also related the experience of asking dad about the Vietnam War. Cheri’s friends were being sent off to fight in this controversial conflict. She explained he gave her a compelling argument of why the United States should not be in this war. Then he gave her an equally compelling argument why our country should be fighting this battle. He left it for her to contemplate and decide for herself.

During my teenage years I remember Rick, a neighbor, coming to speak with my dad. Many years after this visit, he shared the experience with me. At the time Rick was a recent convert to the Church. He needed guidance and sought my father’s counsel. He recalled that their informal, impromptu meeting took a few hours. Now as an adult with responsibilities, he said, “It is humbling to think your father would take so much time to listen to a young man’s troubles. Why would he give so much of his time to ME?”

Through the years family, friends, and neighbors related personal experiences of how my father took time for them. Often it would take a moment of reflection decades after the event when they realized that my father, besides his Church and family obligations, had daily deadlines being responsible for producing 7-8 columns/articles per week, a dozen TV and radio scripts and was committed to a minimum of 60 speaking engagements per year.

Being Called into The Office

Walking into my father’s office when the door was closed was one thing; being called into his office was another. In my tween years, my cousins Johnny and his brother Jeff, who were in their mid-twenties at the time, lived with us. One evening, I heard my dad call Johnny into his office. Usually this meant you were in trouble, and he was. Apparently, Johnny had been out drinking. When he emerged from speaking with my dad, Johnny said, “He made me feel this small!” as he held up his fingers to display a speck. There was no yelling or shaming, just a quiet, loving, but firm talk addressing Johnny’s behavior and the impact on the household.

During this same time, I recall being upset with my mother who, in my eyes, had treated me unjustly. I would not speak to her. This went on for about a week before my dad called me into his office. With great concern and tenderness, he got straight to the point. “You are hurting your mother.” As he continued to speak about the pain my mother was experiencing due to my shunning, his eyes filled with tears. He then ended the moment by asking me to talk to her. I never softened my expression during the interaction and marched out of his office, yet within the hour when my mother spoke to me, I answered.

Reflecting on how my father’s example of living gospel principles which he made come to life in his Book of Mormon class, continues to strengthen my testimony. I am forever grateful for his influence in my life.

The last dozen years of my father’s life I cared for him while his body failed him from the effects of Parkinson’s Disease. He thanked me every day for being there and showed me how to silently suffer with grace and dignity. At that point in my dad’s life, he could only peck with one finger on the silent keyboard of his computer, yet he continued to type. Even though I could no longer fall asleep to the clattering keys of his typewriter, the memory would still comfort me as I drifted off to sleep.

I loved the courage and decency of Jack Anderson. I never met him but admired his work. Also, my father had a personal story about him from an experience of seeing him in Ogden, Utah on leave from the military during World War II. You are lucky he was your father. A great and a good man.

Jack Anderson was a household name when I was growing up. It’s nice to hear it mentioned again.