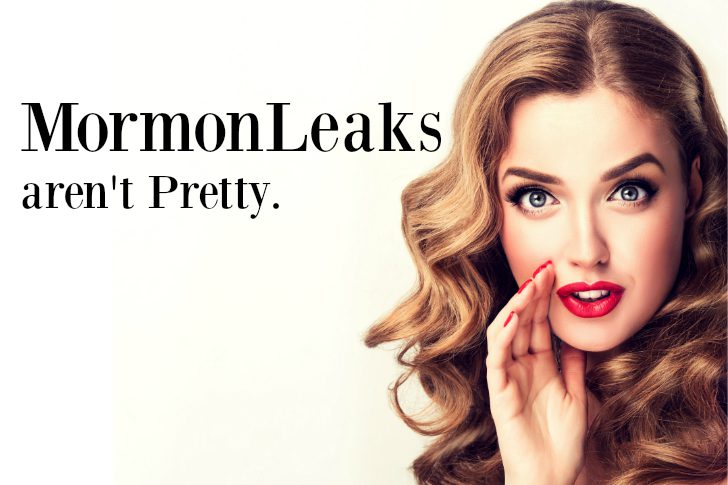 Last week on Tuesday, MormonLeaks published an internal PowerPoint presentation that was allegedly from a Dec. 8, 2015 meeting of the Quorum of the Twelve Apostles that showed eight slides including one listing several reasons that influence people to leave the faith.

Because The Church of Jesus Christ sent letters from their intellectual property office to the Internet hosting website, Docdroit,net, that publishing the document infringed a church copyright, the company disabled the website.

Make no mistake, however, this is not the end of the story. The day before the leak, John Dehlin and MormonLeaks founder Ryan McNight had already created a video of what they called an “all-star” panel to discuss the PowerPoint. It was orchestrated to come out at the same time, and so the PowerPoint remains online—just in a different place—and, in fact, with commentary as this panel lobs criticism at the Twelve.

MormonLeaks, which was formed in October 2016, has leaked videos and documents before, and they actively solicit more internal information about the LDS Church with a website form for people to submit information and maintain their anonymity.

This should disturb us all. We live in a divisive age, a “gotcha” time where people make it a purpose to embarrass or destroy others. We are drowning in the flood of leaks and the water is only rising.

People certainly feel the vulnerability of their own personal privacy. We slide our passports and credit cards into RFID protective sleeves so someone can’t pick up the information electronically through crowd hacking. Identity theft is a nightmare that has created new worries. We would hate to think that our conversations could be recorded and sent to someone out to defame us.

There is a parallel in workplaces and institutions. What organization could function effectively if internal communications, emails and discussions were publicly exposed? What does it mean for trust if people are urged by outsiders to share information they have no right to share?

The Power of the Internet

The Internet has only given the disgruntled and angry, the power seeker or revengeful new options for damaging others and institutions. Yes, the Internet has given everyone a voice, but it has also allowed everyone to be an accuser. You can hear the echo of this from what John the Beloved says in Revelation, “for the accuser of our brethren is cast down, which accused them before our God day and night” (Rev. 12:10).

Blogger and independent scholar Rosalynde Welch said, “The Internet rewards this asymmetrical distribution of power, where one person can suddenly get a lot of power over a large institution in a way that never would have been possible before.”

Of course, the Church would be one of those institutions that the unhappy would seek to smear—and the Internet gives the tool to do it with the significant damage that can ensue.

Some suggest that there are bad leaks and good leaks, such, as for instance, when conspiracies or criminal acts are exposed, but, by his own admission, Ryan McKnight, who is no longer a Mormon, says he is just looking for transparency with his MormonLeaks agenda. He does not expect to find any corruption in the Church. He told the Deseret News, “We only want transparency. The end goal is simple; it’s transparency from the church.”

In fact, if he hoped to expose any deep secrets about the Church, his leaks have landed with an underwhelming thud. There has been no golden opportunity for smashing the institution in the documents he’s exposed. Nothing is earth-shattering.

Transparency is a dangerous throne at which to worship, however. You do have to question the motives of someone who seeks illicit information and asks others to break a trust to obtain it.

Fred Karger at MormonTips, another site seeking leaks, makes no bones about his motive in seeking internal information about the Church. “Because of everything they’ve done to brutalize the LGBT community, this is our way of fighting back.” He is quite open that his goal is to bring down the Church.

Transparency sounds like a brave narrative to attach to anyone’s motives in this tell-all world we live in. It’s made to sound like the modern day Robin Hood, stealing secrets from the rich to give to the poor. It’s the bold, lone adventurer against the big institution. Yet hidden under that narrative is the suggestion that this is a world without boundaries, that no line is there for a reason, that nothing is sacred, that private discussions should be aired for a studio audience.

Ironically, we live in an age that is fearful for our loss of privacy, but at the same time lauds transparency and those who leak it as heroes on an heroic quest.

Seeking transparency can just be a fancy label for motives that are, in fact, not noble, but reprehensible—the will to embarrass and damage a person or an institution. McNight calls himself the “fearless fixer”, but his MormonLeaks looks more like deliberate betrayal for personal power over an institution he was disgruntled enough to quit.

The Idea of a Leak

What is also disturbing about a leak is the narrative that surrounds it. The uninformed may assume that if someone is actively seeking leaks about an organization, that somehow that organization must have an unrighteous, hidden underbelly. If you shine the light on it, the rats will scurry. It deserves this whistleblower.

Media organizations have picked up this story about MormonLeaks. It is news. One outlet labeled their story, “The WikiLeaks-inspired War for the Mormon Church’s Deepest Secrets.” If there is a leak, there must be a secret, right? If there is a secret, it might be deep—and then, of course, dark. At the very least, it suggests that there is a very good reason someone would seek a leak—and people want to know what that is. Reader Michael Shea commented on the Deseret News article about this with these words. “Thankfully, most of the American public seems smart enough to put that sort of leaked information where it belongs: in the trash.”

Think what is involved in a leak. Employees who are privy to confidential information in an organization break their ethics by leaking that confidence. In some cases, they might be breaking the terms of a confidentiality agreement. In leaking information they are not only doing something illegal, but smearing their own integrity and breaking trust with those who have trusted them.

Those who publish such leaked material have also shredded their ethics as they are dealing in stolen goods. They are intellectually dishonest—looking for transparency while they are not transparent themselves by withholding the source of the leak. They are looking for something to damage a person or institution, while they themselves are unethical. Did they encourage theft by their willingness to support it?

McNight told the Deseret News about the leaks he is looking for, “I don’t know how the person got them, and I don’t care. That doesn’t play into the decision…If they have broken a non-disclosure agreement or have broken the law to obtain the information to send to us, that is their problem, not mine. If we receive something we think should be part of the public record, we will publish it.”

Dan Maloy, commenting on the article in the Deseret News, said, “So this man, McKnight, claims he wants ‘transparency’ so ‘honesty’ can reign everywhere the Church touches, yet he does not care where the information he leaks comes from or what the motivations are of those who give him the information to put out on the Internet. However, motivation is a huge, huge part of judging things correctly, or in other words, in achieving ‘honesty’, yet this man refuses to give the honesty he claims he so desperately wants to achieve.”

Though leaks are common enough in this brutal world we live in to be almost fashionable, only under the rarest of circumstances can they be ethical. Leakers are 2lst century peeping Toms, but there is a 21st century website to make it easy.

The Babble around a Leak

A leak by its nature is taken out of context. It is a look through a keyhole, but that doesn’t mitigate the chatter around it. Interpretations and pronouncements abound along with critiques of every comment and belittling of the participants.

With MormonLeaks, it is no different. Earlier the group released 15 videos of the Twelve being briefed on issues of the day, and, last week, the release of the PowerPoint made it very clear, in one of the slides, those influences leading to apostasy that concern the Brethren. Seventeen of these influences were listed on a spectrum from Far Left to Far Right and included such things as “Disagree with current policies” to pornography to “Last days/end of world predictions”.

With these leaks came the babble, misinterpretations of motive and utter disrespect. John Dehlin said, for instance, “I think these videos show how the brethren are even more conservative and more out-of-touch than we thought—which is saying a lot.”

He added, “I think the church needs to put these apostles on emeritus status. They are unfit to govern a church so wealthy and powerful. These videos show they are unfit. They need an emeritus status, like retirement, like the pope, so we can get more fit leaders—because lives are at stake.”

So this is where a leak leads us. In this comment, Dehlin was referring to the church’s stand on marriage and the LGBT issues—and now, since this leak, he also has the private conversation of a meeting of the Twelve to add fodder for his fire.

Yes, we are really to believe that all that is sought is transparency? Instead it is clearly more opportunity to lob grenades.

More poignantly, I have thought of the Savior and the Pharisees who were forever trying to entrap Him with a question, seeking to find a charge against Him. If they couldn’t get Him one way, they tried another. They throw a woman taken in adultery before Him when He is in the temple and pose a trick question where He can’t win with either answer. “Now, Moses in the law commanded us, that such should be stoned: but what sayest thou?” If He says not to stone her, they will accuse Him of not adhering to the law. If he says to stone her, the message of compassion He has taught will be undercut. Gotcha.

But MormonLeaks is a symptom of our times. It is acid rain. It is wearying. It seeks to knock down the sacred, to dismantle those with a mantle. It may not go away soon, but it also won’t succeed.

God does nothing save it be plain unto the children of men. Joseph Smith taught the importance of plain and precious truths. It is my belief that the church has nothing to fear from these leaks.

I think the Church should find out who the "leakers" are. They have no right to disclose things that are not to be public. When the Twelve have made a decision after significant discussion and prayer about an issue, then they will let us know.