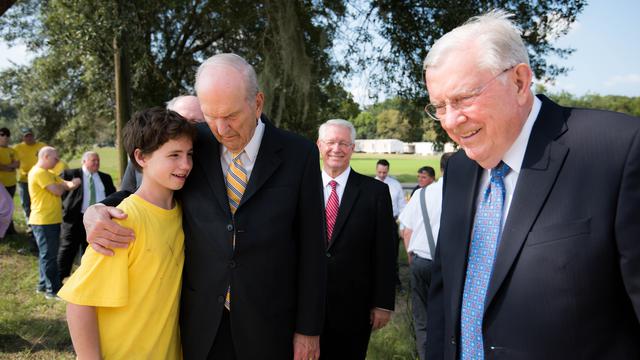 Leaders from of The Church of Jesus Christ of Latter-day Saints traveled from Utah to Baton Rouge, Louisiana, over the Labor Day weekend to minister to flood victims and inspect the damage caused by recent record rains. This, as a new wave of more than 5,000 volunteers helped clean up damaged homes in the wake of the natural disaster.

President Russell M. Nelson of the Quorum of the Twelve Apostles was accompanied by ElderM. Russell Ballard of the Quorum of the Twelve Apostles; Elder Richard J. Maynes of thePresidency of the Seventy; Bishop Dean M. Davies, first counselor in the Presiding Bishopric; and Sister Neill F. Marriott, second counselor in the Young Women general presidency. Elder R. Randall Bluth, an Area Seventy, and other area leaders also participated in the outreach efforts.

“The Lord said that the great commandments are to love God and the other is to love your neighbor as yourself. And we’re awfully good about talking about it, but here you really see that in action. These people are really loving their neighbors,” said President Nelson after meeting the volunteers in Louisiana, including 125 workers from the Chattanooga Tennessee Stake.

Elder Ballard reported that Mormon Helping Hands volunteers have showed up from 13 different states. “When the word went out that they needed help, the help flooded in. I think they said 11,000 total people have come here one way or another to assist, which is remarkable. This very likely could be the only organization in the world that could do this with volunteers.”

The Mormon leaders met with community leaders and volunteers Saturday, September 3, 2016. Bishop Davies presented a $50,000 donation from the Church to a food bank in Baton Rouge that lost its inventory in the flooding. They also attended a special meeting for flood victims on Saturday night.

“We express our sincere commendation and appreciation for the work of the Greater Baton Rouge Food Bank and for the relief that your organization brings to so many,” said Bishop Davies. “We’d like you to know that three truckloads of food items will be delivered to the food bank.”

Sunday morning, the leaders attended worship services for volunteers and local members in four different meetinghouses in the area before returning to Salt Lake City in the afternoon.

“I feel your earnest faith and purpose and desire to serve,” Sister Marriott told the congregation. “The spirit you’ve brought into the room has changed my heart, and I thank you for that.”

In the past couple of weeks, thousands of Mormon Helping Hands volunteers from Louisiana and surrounding states have participated in relief efforts in parts of Louisiana damaged in mid-August by the floodwaters. More than 60,000 houses were damaged, including the homes of 450 Latter-day Saint families.

On August 28, a special sacrament meeting attended by Louisiana’s governor and the mayor of Baton Rouge was held for volunteers at a Church meetinghouse in Baton Rouge.

The Baton Rouge Louisiana Temple was not impacted by the floodwaters, but two Mormon meetinghouses, the Denham Springs Louisiana Stake center and the Windbourne meetinghouse, received damage.