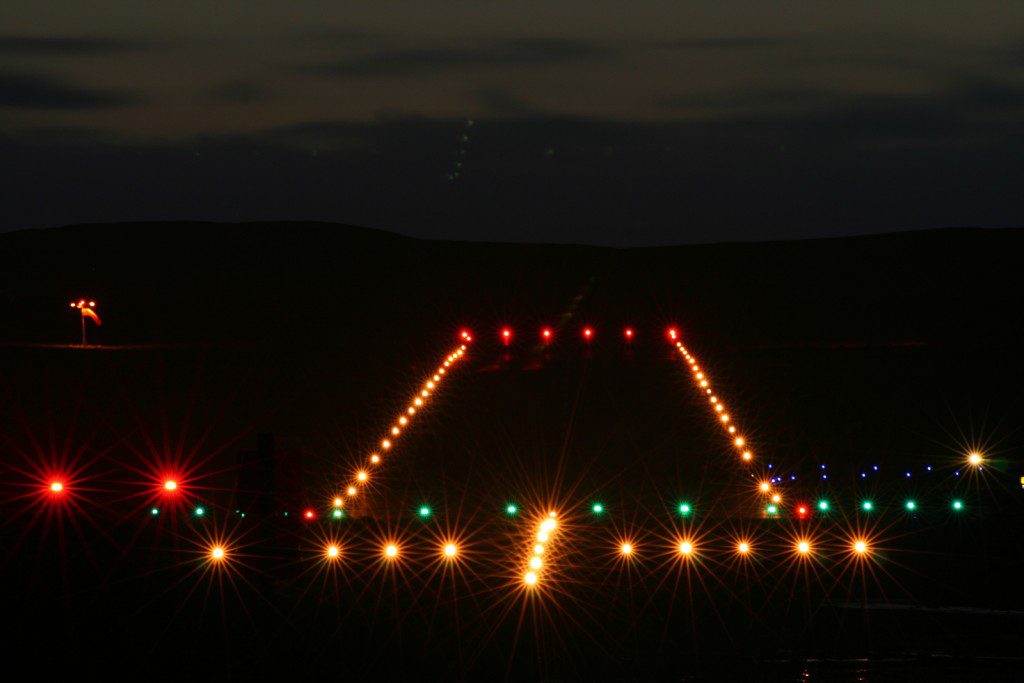 Missionary Moment: Where do We Land the Plane?

This article is by Kent Knight French.

I would like to share with you a true story that happened some forty years ago.  My hope is that those of you who are able, will be prompted by the Spirit to serve full-time missions, and the rest of us will become the very best Member Missionaries we can be.

During my first Stake Mission in Concord, California, my companion Bob Passy and I went out tracting and teaching five nights a week. We felt the Spirit, and had some great success. In fact, we averaged one baptism per month. However, it never once dawned on us to silently offer up short prayers and listen for answers while we were in the act of teaching. That’s because in those days we as missionaries had to memorize the discussions word for word.

Six months into that first mission, Margaret and I moved to Orland, California, and three years later I was called to be the Branch Mission leader. In fact, I was the only missionary in Orland.

It was while I was on this 2nd Stake Mission that we switched to the new flip chart discussions, and because these discussions were to be taught in our own words, I began to ponder how I could best teach them. I also started to offer up short little prayers while teaching the various concepts; prayers like – does he understand, how can I explain this better, do we need to read another scripture, etc.?

Those prayers were a turning point for me.  As I listened for answers I began to feel impressions, and it wasn’t long before the spirit was literally teaching the discussions through me. Needless to say, the Holy Spirit is a much better missionary than I am, and as a result every person He taught got baptized!

About six months after I learned to teach by the Spirit, the Church held a Priesthood Leadership Conference in Roseville, California. S. Dilworth Young was the visiting General Authority, and Floyd Weston (known to his friends as Mr. Missionary) was the main speaker in our missionary breakout meeting.

Brother Weston lived in Placerville, California, and was serving as a counselor in his Stake Presidency. He was also a member missionary without peer. Through his individual efforts he had been instrumental in bringing more than 5,000 people into the Church, and on this particular day he told us his amazing conversion story.

I have never been to a missionary meeting that motivated me like that one. Not ever! And, when the meeting ended I was prompted to ask Brother Weston for his address and telephone number.

On the way home that day it came to me that if we combined Floyd Weston’s conversion story with the short film “Man’s Search for Happiness” it would make a fantastic Open House.

Now, to give you a little background, Orland, Ca. was at that time a small agricultural town of twenty-five hundred people located about two hours drive North of Sacramento. Also, if I remember correctly, our Branch had about 80 active members. One thing I do remember with clarity is that at the first combined priesthood meeting I attended when we moved to Orland three years earlier, there were only six of us in attendance.

Anyway, the day after the Roseville meeting I presented my Open House plan during our PEC meeting.  The Branch President (Fred Olson) approved it right on the spot, and we chose a date that was two months away.

When I called President Weston he consulted his calendar and said the date we had chosen, Dec 10th, was the only day he had free for the next twelve months.

I was so disappointed, and I guess it showed in my voice, because after a little pause he said, “Brother French, it’s ok, I would be happy to speak at your Open House!” Now, that says everything a person ever needs to know about Floyd Weston.

Well, our little branch began to make preparations for the big event right away, and it wasn’t long before our members were convinced that Brother Weston could get their friends to take the missionary discussions.

Everyone wanted to hear him speak, but our chapel was so small that we had to limit our member attendance to only those who brought a non-member friend. The plan was for them to invite their friends to see the film “Man’s Search for Happiness.” Then, after the film, Floyd Weston would tell his conversion story, and get them to fill out a missionary referral card.

Each week in our sacrament meeting, we mentioned how important it was for our members to invite everyone they knew, and their response was overwhelming. One teenager, Bob Whitaker, invited 42 of his high school friends.

We also put an ad in the local newspaper to notify the community that the film “Man’s Search for Happiness” was coming to Orland, and that it was so good it caused the Mormon Pavilion to become the third most visited pavilion at the 1970 World’s Fair in Tokyo.

The day of the Open House finally arrived. Time passed slowly, and then about 5:30 p.m. the telephone rang at our home. The call was from Brother Weston.  He had gone up to the mountains for the day with his family, and they had just gotten home.  He said their car got stuck in the snow, and it took more than two hours to dig it out.  Finally, he told me that he was very sorry, but he couldn’t possibly make it to Orland in time for the Open House (a 2.5 to 3 hour drive).

My heart absolutely sank. However, at that very moment the Spirit prompted Brother Weston with a solution. He said he owned his own small airplane, and if Orland had an airport with lights he could fly over and meet us there in about an hour. I was relieved and excited all at the same time. You see, our little town had an airport with lights, and they were on every night!

My wife Margaret and I arrived at the airport about 6:20 p.m.  To our dismay, the lights were off.  We couldn’t believe it! We were sitting in the car wondering what to do when the airport manager drove up.  We asked him about the lights and he said it was the first time in the airport’s history that the lights had failed. That’s when I realized what was going on. Satan was worried. In fact, he was really worried, and he was doing everything in his power to sabotage our town’s missionary Open House.

The airport manager suggested that he radio some of the nearby airports to see if Brother Weston had landed elsewhere, but one by one they all said they hadn’t had any communication with him. In desperation, I asked the manager if he had a telephone I could use. He replied – “Only the pay phone over there on the wall”.

In those days telephone calls cost 10 cents, and when I reached into my pocket I discovered I had only two coins, and they were both dimes.

It was a long shot, but I thought Brother Weston might have called our house if he had found another place to land.  So, I called our babysitter, Joni Olson, but she said there hadn’t been any calls.  Then, with my last dime, I called the Branch President’s home because I had given that phone number to Brother Weston also.

President Olson’s wife Darlene answered, but she said Brother Weston hadn’t called. I was telling her what was going on when suddenly the voice of Mel Bonsteel, the Second Councilor in the Branch Presidency, came right onto our line.

Now, I don’t know how the Lord got Brother Bonsteel through that busy signal, but I realized a true miracle was taking place. God had taken charge of the situation, and he was on our side!

I said, Mel, is that you, and he replied “Yes it’s me”. Then, he said, “Floyd Weston just called the chapel. He’s at the Corning airport!”  Well, Corning was 12 miles North of where we were, and it was already time for the Open House to begin. So, I told Brother Bonsteel to stall as long as he possibly could, and then show the film.

At that point the Lord gave me permission to drive 80 miles per hour to the Corning airport!  We pulled up in front of the airport gate, the car door swung open and Brother Weston jumped in, all in one motion.  Then, we speed even faster back to Orland.

As we approached the chapel we could see the parking lot was full. In fact, cars were parked for two blocks in every direction, but miraculously there was an empty parking space waiting for us right in front of the chapel door.

We pulled straight into it and ran up the stairs and into the foyer. When I cracked the door open and peeked into the chapel I couldn’t believe my eyes.  Folding chairs were set up in every aisle, and the place was absolutely packed with non-members!  More than 5% (142) of the town’s population was in attendance.

The video was over and Brother Bonsteel was standing at the pulpit. He had stalled until he could stall no more. Then, at the last second his eyes caught mine and without skipping a beat he finished his sentence by saying – “and, now we will hear from Floyd Weston!”

Well, to make a long story short, the very large stack of missionary referral cards we collected to distribute that night was stolen from off the table in the foyer. However, Satan didn’t win this war. That’s because our members were converted to missionary work as never before, and the Branch ended up with 23 baptisms that year and 17 more the next.

By the way, through Bob Whitaker’s continuing efforts with his high school friends, five of them eventually  joined the church and two of the young men went on to serve full-time missions.

Now, there is a lot more to this story than just missionary work, but the bottom line is that three or four years after our Open House the Orland Branch became a Ward, and it’s still a Ward in the Chico California Stake today.

Brothers and Sisters, I know from the member missionary accomplishments in Orland, that we are missing many opportunities to share the gospel because we’re often not inviting people to our church meetings and activities and afterwards following through like Bob Whitaker did and like Floyd Weston did.

May we look inward, awaken to those opportunities, step out of our comfort zones and speak up more and invite!

Brother French,Loved your story. I served in the California North Mission and was in Chico for about 5 months. I know Orland very well and there was an Olsen there as Branch President at the time. I was also in Placerville when Floyd Weston moved there. I had several opportunities to get to know him better. I am writing a book about Floyd Weston (with the family's permission and wondered if you would mind emailing me so that we can have a conversation. Thanks! Gail Johnsen

Thank you Brother French for writing the inspiring details of this amazingly true member-mssionary story in Orland, CA. I remember it well! It was a life-changing experience for me as a teenager. I feel so grateful for good men like you, Fred Olson, Floyd Weston, my father Reed Whitaker, and all the other good male role-models that blessed my life in our little Orland Branch. It helped make me a member-missionary for life! God bless you and your wife Margaret!