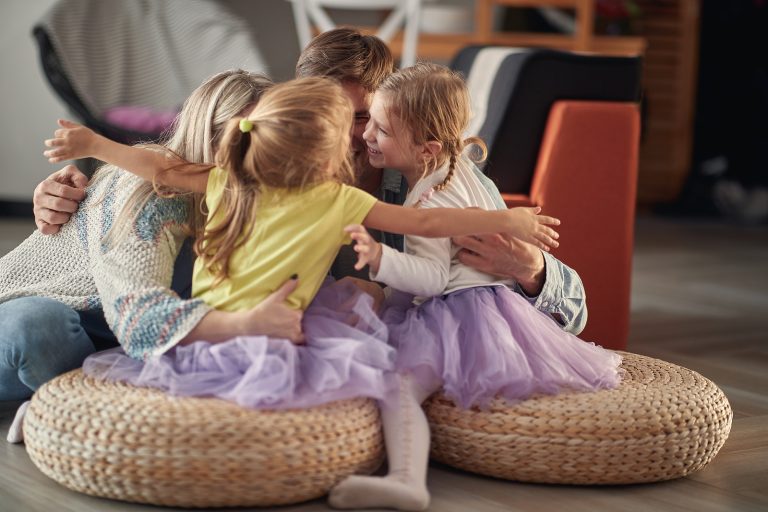 Two to three times per day, my 17-year-old son spontaneously comes up to me as I’m coming down the hall or when I’m standing in the kitchen and wraps his arms around me and gives me a tender, loving hug. “Oh, Mom…I love you,” he says.

These hugs are some of the highlights of my days. They truly turn our hearts toward each other. He is the youngest child of four, and all of his siblings have given me hugs each day too, even into their teenage and young adult years (when they lived at home). Hugging has become a family habit.

When I married my husband, he told me that he wanted to hug his children and tell them that he loved them. This is because, even though he knew his father loved him, his World War II veteran father didn’t usually openly express his love unless it was in a joking way. So, from the very beginning of parenthood, we made efforts to establish a habit of hugging and bonding.

In a time when people are literally obsessed with the concept of finding safe places for themselves and others, could we be overlooking the safest of all places, loving families? Why, in a time when there is more loneliness and confusion than ever before, are youth looking away from their families for safety instead of turning to the people who love them most?

When we establish habits of showing affection and having calm, loving communication, no matter what mistake or bad behavior has happened, then we literally turn the hearts of children toward parents and the hearts of parents toward children.

Behaviors and emotions, such as anger, stress, frustration, annoyance, disrespect, and greediness, are often the results of selfishness and can lead to manipulations. Such manipulations detach family bonds and pull hearts away from each other. When this happens, it is possible for people to feel fully alone when they are surrounded by their families.

In 1999, my husband and I started taking in treatment foster children. Besides the many obvious issues we were supposed to treat them for, like anger control management and addictions or dishonesty, we noticed that all the youth who came to our home did not know how to have healthy attachments to family. They had been abused or had hard family circumstances that caused them to pull away from bonding to families. So, we endeavored to teach them that home and family could be the safest place, even though their past experiences might have taught them otherwise.

Opening Up to Love

We didn’t immediately start hugging our foster children. We knew that they wouldn’t respond well to that. In fact, they might consider it manipulative because trust was not fully there when they first arrived at our home. So, this is what we did.

We told the youth exactly what we would be learning at our home. We taught them all the skills they would need for relationship success, and then promised them that we would keep to the skills too, and then we did, even if I had to read my correction words off of a cue card at times to keep from going back to an old habit.

After they saw that we fully intended to help them and not control them, they started to smile more and reach out to the family in small ways or give more smiles in return. Then we started occasionally touching their arm or back when we would introduce them to someone and involve them in our fun time that sometimes included games when touching seemed normal.

Then came the hug talk. With each of our foster children, I had a special talk where we discussed our relationship and how much we loved them, even though they wouldn’t be there for the long term. Then I told them that even though we weren’t their real parents, we were happy to hug them and give them affection so that they could feel what a happy family does and so that our bonds could grow. But, I also told them that they didn’t have to hug or touch anyone; it wasn’t a requirement. This was a conversation to let them know what relationships we wanted to help them have so that they could pave different paths for their futures than they might currently be on, and to let them know they didn’t need to feel weird if they wanted affection from us.

Some of them would ask for a hug from us right then. Other youth thought about that offer for a while, and then started being more affectionate with us bit by bit.

Sometimes, such as when I hugged James on the 2009 BBC documentary call The World’s Strictest Parents, I felt they really needed a hug to ground them and feel that everything would be okay. So, I would ask them if they wanted a hug, or just give them a gentle instruction to give me a hug, and they did.

The moment James hugged me during The World’s Strictest Parents, he stopped fighting. He realized we really loved him and that he needed to open his heart up to that, even though he was stressed and going through withdrawals.

Hugs are powerful, especially if they are full of sincere affection and love. They literally make us one for a short moment and help us appreciate each other, and recognize that we are not alone. Why do humans hug? I don’t know if there is any singular origin of the practice, but all humans do it. It seems natural for people to do if they are full of love for each other, even if hugs aren’t cultural. Maybe humans hug because the practice transforms their hearts and relationships in such powerful ways that they are truly healed because of their hugs.

The hearts of children and parents are turning more and more away from each other in these modern times. Let’s help turn the hearts toward family as we start preparing to hug more in our families.

Watch The Expectation Trap Vs. The Cycle For Success, a free class by Nicholeen Peck.

I received a triple bonus by reading and watching the links! Very helpful and insightful. I’ve had a lot of time in the expectations trap..painful learning to deal with my own emotions. How does this relate to Nonviolent Communication; rewards and “consequences” could be manipulative as well.

Thank you Nicholeen for sharing your experiences with us. What an example you are. We have all gained valuable insights from your remarkable interactions with your foster children. Loved the confirming value of hugs you shared.