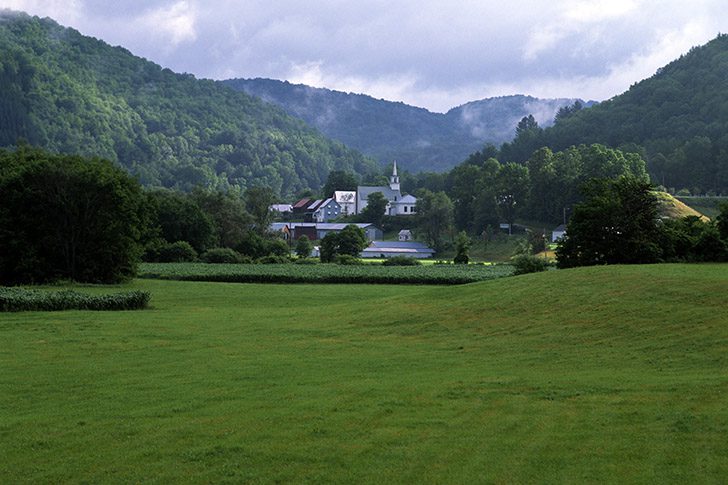 To celebrate the study of the Doctrine & Covenants and Church History this year, Meridian is serializing The Revised and Enhanced History of Joseph Smith by His Mother. To see the previous installment, click here.

Lucy’s dream of the two beautiful trees by a very pure and clear stream in a magnificent meadow. Interpretation is given about Joseph Smith Sr. and his older brother, Jesse Smith.

While we were yet living in the town of Tunbridge, my mind became deeply impressed with the subject of religion, which probably was occasioned by my singular experience during my sickness at Randolph. I commenced attending Methodist meetings and endeavored to persuade my husband to attend with me. He went a few times to gratify me, but he had so little faith in the doctrine taught by them that my feelings were the only inducement for him to go.

As soon as his father and Brother Jesse[1] heard that we were attending Methodist meetings, they were much displeased. His father came to the door one day and threw Tom Paine’s Age of Reason into the house and angrily bade him read it until he believed it.[2] They also told him that he ought not to let me go to the meetings and it would be far better for him to stop going. Accordingly, my husband requested me not to go, as he considered it hardly worth our while to attend any longer, and it would prove of but little advantage to us, and it gave our friends such disagreeable feelings.

I was very much hurt by this, but did not reply to him then. I retired to a grove of handsome wild cherry trees not far distant and prayed to the Lord that he would influence the heart of my husband that it might be softened so as to receive the true gospel whenever it was preached, or that he might become more religiously inclined. After praying some time in this manner, I returned to the house much depressed in spirit, which state of feeling continued until I retired to my bed. That night I had the following dream:

I thought that I stood in a large and beautiful meadow, which lay a short distance from the house in which we lived, and that everything around me wore an aspect of peculiar pleasantness. The first thing that attracted my special attention in this magnificent meadow was a very pure and clear stream of water which ran through the midst of it; and as I traced this stream, I discovered two trees standing upon its margin, both of which were on the same side of the stream. These trees were very beautiful. They were well proportioned, and towered with majestic beauty to a great height. Their branches, which added to their symmetry and glory, commenced near the top and spread themselves in luxurious grandeur around. I gazed upon them with wonder and admiration, and after beholding them a short time, I saw one of them was surrounded with a bright belt that shone like burnished gold, but far more brilliantly. Presently, a gentle breeze passed by, and the tree encircled with this golden zone bent gracefully before the wind and waved its beautiful branches in the light air. As the wind increased, this tree assumed the most lively and animated appearance and seemed to express in its motions the utmost joy and happiness. If it had been an intelligent creature, it could not have conveyed by the power of language the idea of joy and gratitude so perfectly as it did; and even the stream that rolled beneath it shared, apparently, every sensation felt by the tree, for, as the branches danced over the stream, it would swell gently, then recede again with a motion as soft as the breathing of an infant, but as lively as the dancing of a sunbeam. The belt also partook of the same influence, and, as it moved in unison with the motion of the stream and of the tree, it increased continually in refulgence and magnitude until it became exceedingly glorious.

I turned my eyes upon its fellow, which stood opposite; but it was not surrounded with the belt of light as the former, and it stood erect and fixed as a pillar of marble. No matter how strong the wind blew over it, not a leaf was stirred, not a bough was bent, but obstinately stiff it stood, scorning alike the zephyr’s breath, or the power of the mighty storm.

I wondered at what I saw, and said in my heart, What can be the meaning of all this? And the interpretation given me was that these personated my husband and his oldest brother, Jesse Smith; that the stubborn and unyielding tree was like Jesse; that the other, more pliant and flexible, was like Joseph, my husband; that the breath of heaven, which passed over them, was the pure and undefiled gospel of the Son of God, which gospel Jesse would always resist, but which Joseph, when he was more advanced in life, would hear and receive with his whole heart and rejoice therein; and unto him would be added intelligence, happiness, glory, and everlasting life.

[1] Jesse Smith was particularly opposed to organized religion. He was the only one of the four living sons of Asael and Mary Smith who did not accept the restored gospel.

[2] Part 1 of Thomas Paine’s Age of Reason, which consisted of fifty-two pages, was first published in Paris in 1794 and part 2, consisting of ninety-six pages, was first published in 1795. Perhaps Joseph’s father, Asael, hoped he would, at least, be attracted to Paine’s first page, which in part reads: “It has been my intention, for several years past, to publish my thoughts upon religion. . . . I believe in one God, and no more; and I hope for happiness beyond this life. I believe in the equality of man; and I believe that religious duties consist in doing justice, loving mercy, and endeavoring to make our fellow creatures happy. But, lest it should be supposed that I believe many other things in addition to these, I shall, in the progress of this work, declare the things I do not believe, and my reason for not believing them.” (The Age of Reason. Part the First. Being an Investigation of True and of Fabulous Theology. 3rd ed. [London: R. Carlile, 1819], p. 1.) Asael Smith was likely encouraging his son Joseph to be cautious in his study of the religions of the day.