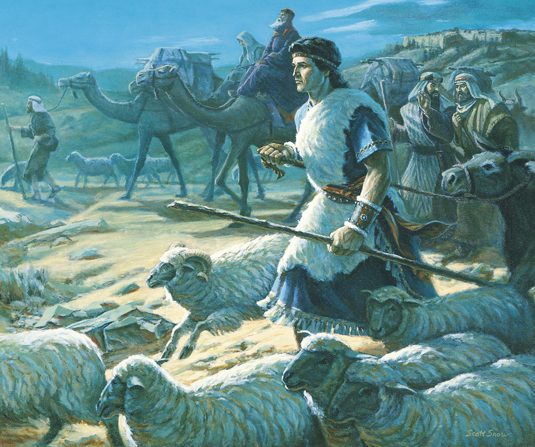 Introduction
The first three chapters of 2nd Nephi record Lehi’s last counsel and blessings to his children. In true Near Eastern fashion, Lehi gathered his family together and began to give the blessings of inheritance to his posterity. It is well to look at this scene in some detail.

Some question the idea of Nephi’s sisters (see 2 Nephi 5:6), who they were. On May 6, 1882, Apostle Erastus Snow said, “…that Ishmael was of the lineage of Ephraim, and that his sons married into Lehi’s family, and Lehi’s sons married Ishmael’s daughters…” (1) Near Eastern tradition would say that either Ishmael is Lehi’s brother or he is Sariah’s brother. For inheritance reasons children almost always married their first cousins. In this situation, then, the eldest sons of Ishmael had married Lehi’s daughters (Nephi’s older sisters) and it would have been the most natural thing in the world for Lehi and Sariah to be not only concerned about their sons having women to marry, but not to leave their other two children behind in the soon-to-be-destroyed Jerusalem.

Dr. Hugh Nibley wrote: “The interesting thing is that Nephi takes Ishmael (unlike Zoram) completely for granted, never explaining who he is or how he fits into the picture-the act of sending for him seems to be the most natural thing in the world, as does the marriage of his daughters with Lehi’s sons. Since it has ever been the custom among the desert people for a man to marry the daughter of his paternal uncle (bint ‘ammi), it is hard to avoid the impression that Lehi and Ishmael were related.” (2)

Inheritance Comes with Stewardship and Responsibility
In the first chapter of 2nd Nephi, Lehi glories in the obtaining of “this precious land of promise” as the inheritance for his posterity. He sets up what becomes one of the themes of the Book of Mormon, quoting from the Lord: “Inasmuch as ye shall keep my commandments ye shall prosper in the land; but inasmuch as ye will not keep my commandments ye shall be cut off from my presence.” (2 Nephi 1:20)

Lehi said: “we have obtained a land of promise, a land which is choice above all other lands; a land which the Lord God hath covenanted with me should be a land for the inheritance of my seed…And if it so be that they shall serve him according to the commandments which he hath given, it shall be a land of liberty unto them; wherefore, they shall never be brought down into captivity; if so, it shall be because of iniquity…And if it so be that they shall keep his commandments they shall be blessed upon the face of this land, and there shall be none to molest them, nor to take away the land of their inheritance; and they shall dwell safely forever.” (2 Nephi 1:5, 7, 9) The benediction/malediction, blessing/cursing that Lehi left upon this land (the hemisphere of North and South America) continues to this day. And “if the day shall come that they will reject the Holy One of Israel, the true Messiah, their Redeemer and their God, behold, the judgements of him that is just shall rest upon them.” (2 Nephi 1:10)

Whenever the Lord gives blessings to His children there are certain requirements that come with them. “For of him unto whom much is given much is required.” (D&C 82:3) “There is a law, irrevocably decreed in heaven before the foundations of this world, upon which all blessings are predicated-And when we obtain any blessing from God, it is by obedience to that law upon which it is predicated.” (D&C 130:20,21) So it is with the Lord and His covenants with the seed of Joseph, Lehi’s and Ishmael’s posterity, that blessings would come if they were obedient to his words and commandments, and cursings would come if they rejected Him. And forever the children of men would be free to choose.

Free to Choose Liberty or Death
With all the feelings of a tender parent about to part from this world, Lehi pleads with his sons, Laman and Lemuel, to arise to the full stature of the blessings they have received. “O that ye would awake; awake from a deep sleep, yea, even from the sleep of hell, and shake off the awful chains by which ye are bound, which are the chains which bind the children of men, that they are carried away captive down to the eternal gulf of misery and woe.” (2 Nephi 1:13)

Lehi continued: “Awake! and arise from the dust, and hear the words of a trembling parent, whose limbs ye must soon lay down in the cold and silent grave, from whence no traveler can return…Awake my sons; put on the armor of righteousness. Shake off the chains with which ye are bound, and come forth out of obscurity, and arise from the dust.” (2 Nephi 1:14, 23) Here Lehi pleads with his sons to embrace the atonement, to repent of their sins, to come to know the Lord Jesus Christ whom they have so often rejected, to rely “wholly upon the merits of him who is mighty to save.” (See 2 Nephi 31:19)

Lehi later spoke to his young son, Jacob (the same who would become a great prophet of the Lord) and said: “Wherefore, redemption cometh in and through the Holy Messiah; for he is full of grace and truth. Behold he offereth himself a sacrifice for sin, to answer the ends of the law, unto all those who have a broken heart and a contrite spirit; and unto none else can the ends of the law be answered. Wherefore, how great the importance to make these things known unto the inhabitants of the earth, that they may know that there is no flesh that can dwell in the presence of God, save it be through the merits, and mercy, and grace of the Holy Messiah…” (2 Nephi 2:6-8)

In this second chapter of 2nd Neph, Lehi is very clear in his teachings that “the way is prepared from the fall of man, and salvation is free.” (2 Nephi 2:4) He does differentiate that salvation (in this case, the resurrection) is free, but that only those who accept the atonement, repent, and have “a broken heart and a contrite spirit” will be exalted. “And unto none else can the ends of the law be answered.” (2 Nephi 2:7) “Wherefore,” Lehi continues to teach Jacob, “men are free according to the flesh [moral agency]; and all things are given them which are expedient unto man. And they are free to choose liberty and eternal life, through the great Mediator of all men, or to choose the captivity and power of the devil; for he seeketh that all men might be miserable like unto himself.” (2 Nephi 2:27)