Lead Me to the Tree | Meridian Magazine 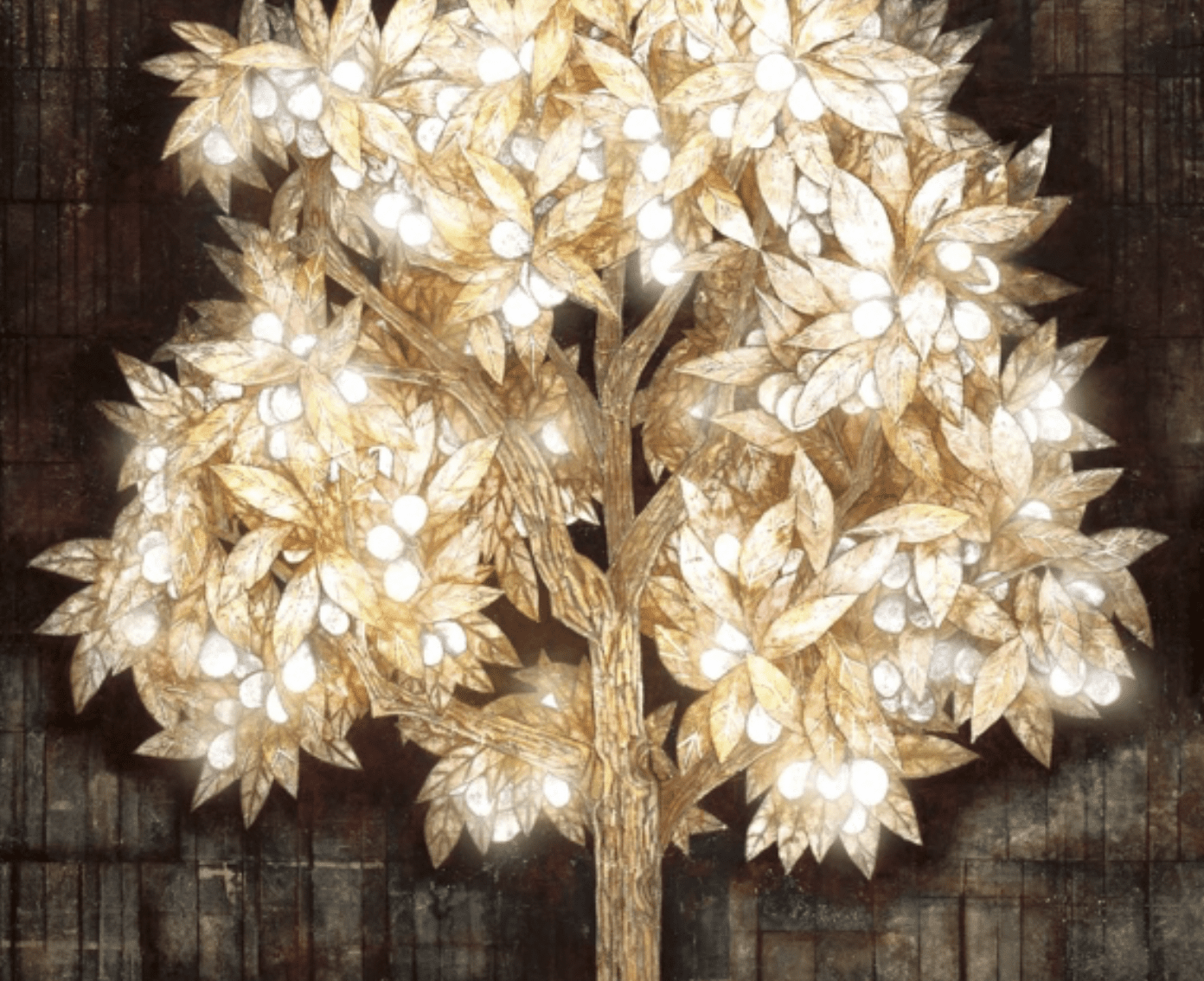 Lead Me to the Tree

The guidebook claimed that the Pu’u O Kila lookout would provide not only one of the best views on the island of Kauai, but in the whole Pacific. I highlighted that sentence in neon yellow, so my husband and I would remember to check it out. Weeks later, on our anniversary trip to Hawaii, we headed up highway 550 to see what all the fuss was about. On the way, I consulted the guidebook once again, noticing the warning that heavy mists often arose from the ocean, obscuring the beautiful view. We pulled into the parking area of the overlook, discovering that the author of the guidebook wasn’t kidding. Walking over to the railing, we found that the mists completely hid everything more than a foot beyond the fence. Though we were disappointed, there was really nothing to do but laugh. We couldn’t resist documenting the moment and the mist that so thoroughly hid the promised beautiful vista:

Driving back down the highway, I marveled at how completely the heavy mist had obscured our view. Not surprisingly, my mind filled with images from the scriptures: the mists of darkness that hid the path leading to the glorious tree of life which the prophet Lehi saw in a vision. I think it is no accident that the vision of the tree of life, with all its symbolism, appears just fourteen pages into The Book of Mormon. The vision could have been given to any of the prophets–and maybe it was shown to others–but it is Lehi who records it. Thus, even though many readers of The Book of Mormon struggle to make it past the “Isaiah chapters” of 2nd Nephi, they have already found something of great value by encountering Lehi’s extraordinary vision.

Before the vision can have any real meaning for us, it is essential to identify what the tree symbolizes. Elder Jeffrey R. Holland “taught that the tree of life is a symbol of Jesus Christ. He said: “The images of Christ and the tree [are] inextricably linked…Christ is portrayed as the source of eternal life and joy, the living evidence of divine love…” (1) Next, we must identify the symbol which leads to the tree, referred to as the rod of iron. “What meaneth the rod of iron…that led to the tree? …it was the word of God; and whoso would hearken unto the word of God, and would hold fast unto it, they would never perish…” (1 Nephi 15:24) What does Lehi’s vision mean for us? It shows that we must maintain a firm grip on the iron rod while keeping a laser-focus on Jesus Christ.

“Pondering the value of having a single-minded focus on a goal brings to my mind an incident which occurred decades ago. My oldest brother, Steve, and I were touring several Asian countries with a group of university students. First stop: Japan. On a Sunday morning, as the group boarded a crowded subway, Steve found a seat a bit away from his friends. The motion of the train, combined with jet lag, lulled him into a sound sleep. In fact, he slept so deeply that he was completely oblivious when his group reached its destination and exited the subway.

Blissfully unaware of their departure, my snoozing brother continued his journey out of Tokyo–way out of Tokyo. He finally awoke when a subway janitor brushed a broom against Steve’s shoe.  Looking around, he found that he was sitting on a deserted subway car, having reached the end of the line. Instead of a bustling city around him, there were only empty fields. Back in downtown Tokyo the subway signs had romanizations under the Japanese kanjis (symbols) so even those who didn’t speak Japanese could read and understand, but Steve was now so far out of the city that the signs had only kanjis, which he could not read. He had no way of even knowing the name of the place he had reached. An attempt to use a pay phone only brought frustration since the Japanese operator spoke no English. What does one do in such a pre-cell phone predicament? How does someone so lost reach their destination?

While a dozen thoughts and prayers rushed through his mind, Steve spotted a blonde head among the few dark-haired people on the subway platform, and he approached its owner, hoping she could speak English and help him. Bingo. The blonde woman was an American, working in Japan as an English teacher. She kindly identified the symbols for Tokyo for Steve and even copied them onto his hand in ink.  After steering him in the right direction, she encouraged him to keep looking for the same kanjis on the subway signs and follow them till he arrived back in Tokyo. Telling him that one symbol stood for to and the other for kyo, she cautioned him against switching the order or he would end up in Kyoto, hundreds of miles from where he wanted to be.

Fortunately, Steve was carrying enough money in his wallet to purchase tickets for the ride back to Tokyo. There was no napping on this journey, no casual approach to finding his way. The first order of business, he discovered, was to preserve the two ink symbols on the palm of his hand since the combination of heat humidity, and nervous perspiration were threatening to melt them away. Palm up and flat, he studied the symbols closely, looking for corresponding kanjis on subway signs. Occasionally, he had to get the attention of a Japanese traveler, point to his hand, and say, “Tokyo,” so people could help him find the correct symbols. Many hours later, Steve arrived in downtown Tokyo, taking a cab for the final leg of the journey to the Miyako Hotel, where his university group–especially his sister–was greatly relieved to see him again.

By identifying the symbols to follow and keeping a single-minded focus on his intended goal, Steve made it safely back to Tokyo. In order to reach the tree of life and partake of its fruit, we must be focused on our goal with the same intensity.” (2)

President Boyd K. Packer spoke powerfully about the meaning of Lehi’s dream: “One word in this dream or vision should have special meaning to…Latter-day Saints. The word is after. It was after the people had found the tree that they became ashamed, and because of the mockery of the world they fell away.

“And after they had tasted of the fruit they were ashamed, because of those that were scoffing at them; and they fell away into forbidden paths and were lost…

Wherever we find ourselves along the path which leads to the Savior, I recommend four ways to lessen the effects of the mists of darkness and the impact of the pointing fingers:

The account of Lehi’s vision of the tree of life is a gift, pure and simple. Frequent, careful study of this vision can open our eyes to our spiritual situation, our current location on the path that leads to the Savior, and whether or not we are firmly grasping the rod of iron that leads to the tree.

Lead Me to The Tree

I see a river, a large and spacious field,
and a straight and narrow pathway
at the side.
And in the distance a most inviting tree,
and a rod of iron meant to be my guide.

I see a building standing in the air,
all the worldly and the proud within its walls.
They’re pointing fingers at people on the path,
distracting them until they start to fall.

Though others mock me as I make my way,
I will not heed no matter what they say.

The rod will lead me to the tree.

To request free downloadable sheet music for “Lead Me to the Tree,” email Lynne Christofferson at [email protected]

Thanks for sharing. I always enjoy hearing Tammy's beautiful soprano voice (I knew her from my college days), and the song tells the story of the Tree of Life in a simple way that even small children can understand.

What a beautiful song! May I suggest one change? The pathway is "strait and narrow" and not "straight and narrow" as in the lyrics printed on this page. There's quite a difference in meaning. See 1 Nephi 8:20.