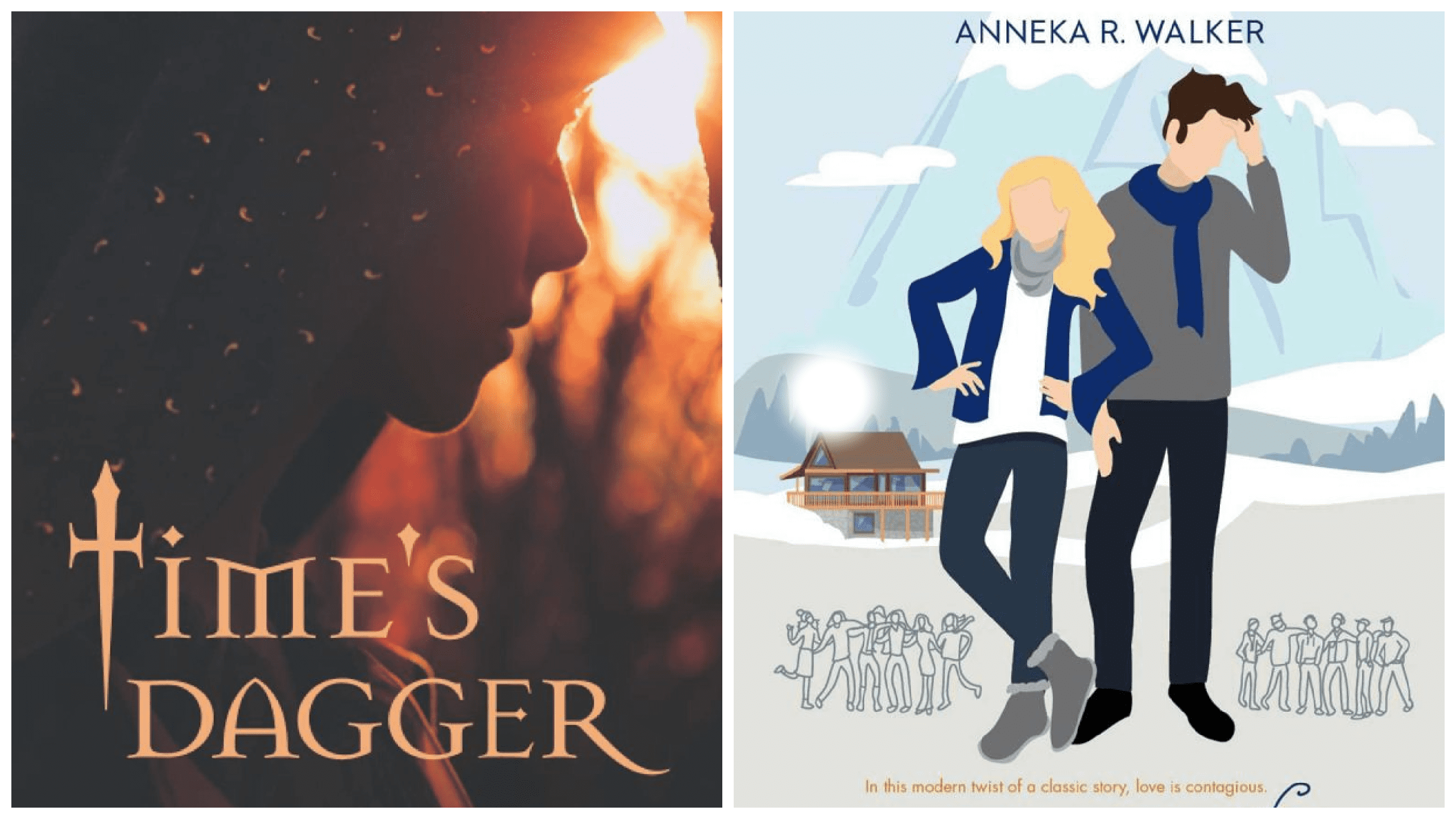 Latter-day Fiction: Outside the Mold

Two books that are a bit unusual are today’s choices for review. Time’s Dagger by Margot Hovley begins as a contemporary story, then makes a gigantic leap backward to the fourteenth century. It has Romance, Historical, some Mystery, and elements of Fantasy all wrapped up in one intriguing novel. The other book I chose to review is Brides and Brothers, a modern take-off of an old favorite, Seven Brides for Seven Brothers.

An old man insists on giving Dillon Kelly an odd dagger before he dies in the OR of the hospital where Dillon works in Seattle. For some unexplainable reason he takes the dagger with him on the vacation he and his brother had planned to Ireland. Deep in one of Ireland’s remaining forests he falls asleep, leaning against an ancient tree where he experiences a strange dream of traveling back in time to 1370. When he awakens it takes awhile for him to realize he isn’t dreaming but has actually traveled back in time. Strange adventures follow as he meets the castle bard, Bruce, and realizes “Bruce” is actually a girl, though no one else seems to realize that. Together they uncover a murder plot and learn much about the ancient druids. The traditions, clothing, and language are odd to him. He longs to return to his own time but doesn’t know how to do it, though he suspects it has something to do with the dagger. As he gradually realizes he is falling in love with Ailish (Bruce’s real name) he is torn between his longing for home and his reluctance to leave her. Taking her with him would subject her to a life she has had no preparation for.

Ailish has disguised herself as a boy since her parents’ deaths. With a talent for music, she sold her parents few belongings and bought a harp. Hearing her play in the village, the reigning earl invited her to the castle to be his bard. She began to be trained by an old man in the forest, who not only trained her in the skills of a bard, but taught her much of the ancient druid lore. Because the strange man she finds in the forest immediately recognizes her gender and seeks to find a druid, she fears he will cause her and the old man who has been tutoring her, trouble. Instead, she finds herself falling in love with him, but how can two people from such distant time periods share their lives? Besides someone wants the last of the druids dead and to usurp the position of a powerful earl. She may be the only one who can stop him.

This book is different from the books I usually read and it left me with some mixed feelings. It’s well written, but I usually avoid books that include the occult or magic. Yet, this one touches on magic and ancient superstitions, but isn’t offensive. It was fun to visualize how shocking it would be to find yourself transported to a vastly different time period. The characters are portrayed well, but I couldn’t help wondering how an almost twenty-year-old woman could keep her gender a secret for the many years “Bruce” supposedly did. Most adults and teens will find Time’s Dagger a fun and diverting, change-of-pace read.

Margot Hovley grew up in Washington State, but now lives in northern Utah where she “chases chickens and grandchildren.” She also teaches piano lessons. This is her third published novel.

Brides & Brothers by Anneka R. Walker is said to be a modern day retelling of Seven Brides for Seven Brothers, but I found little similarity other than the number seven. Both the movie and the stage play are long time favorites of mine. This novel is fun and presents a number of interesting dilemmas readers will enjoy, but it has little Western flair and didn’t capture my long held interest as the old stage play did. Don’t construe my words as a negative evaluation of the book; just as a personal comparison to a longtime favorite.

The story begins with the oldest of seven brothers, Aiden, considering the future of his younger brothers and determining that he should set an example for them and encourage them to establish lives of their own. They’re all adults now, but he has been responsible for them since their parents deaths ten years earlier. Meanwhile Camille, who recently took a teaching position in Cherish, Montana, has two problems; her computer isn’t working and she’ll soon be out of a place to live. Her sister Amy suggests she call her fiance’s brother which she does. Though he’s a potato farmer, he also has a thriving computer business. The two hit it off and marry a month later.

All seems perfect until they return to the farmhouse a day later and Camille discovers five of her new husband’s brothers live there as well. She likes the brothers, but feels like she’s cooking and doing laundry for an army. She soon decides the best way to deal with the problem is to get the brothers married off, and who better for them to marry than her closest friends?

Sometimes it gets a little confusing trying to keep the large number of characters straight in this story, though the author does a great job of assigning them each distinct personalities. Camille and Aiden are a little naïve and temperamental and have a lot to learn about each other and about working together. Their short comings as well as their positive characteristics make them realistic. The plot moves at a slightly slower pace than I would have liked, but it proceeds steadily to a satisfying ending. Both adult and older teen readers will enjoy this modern multiple rromance tale.

Anneka R. Walker has a bachelor’s degree in English and history from Brigham Young University. She is married and the mother of five children. She has more than a half dozen historical romance novels to her credit.