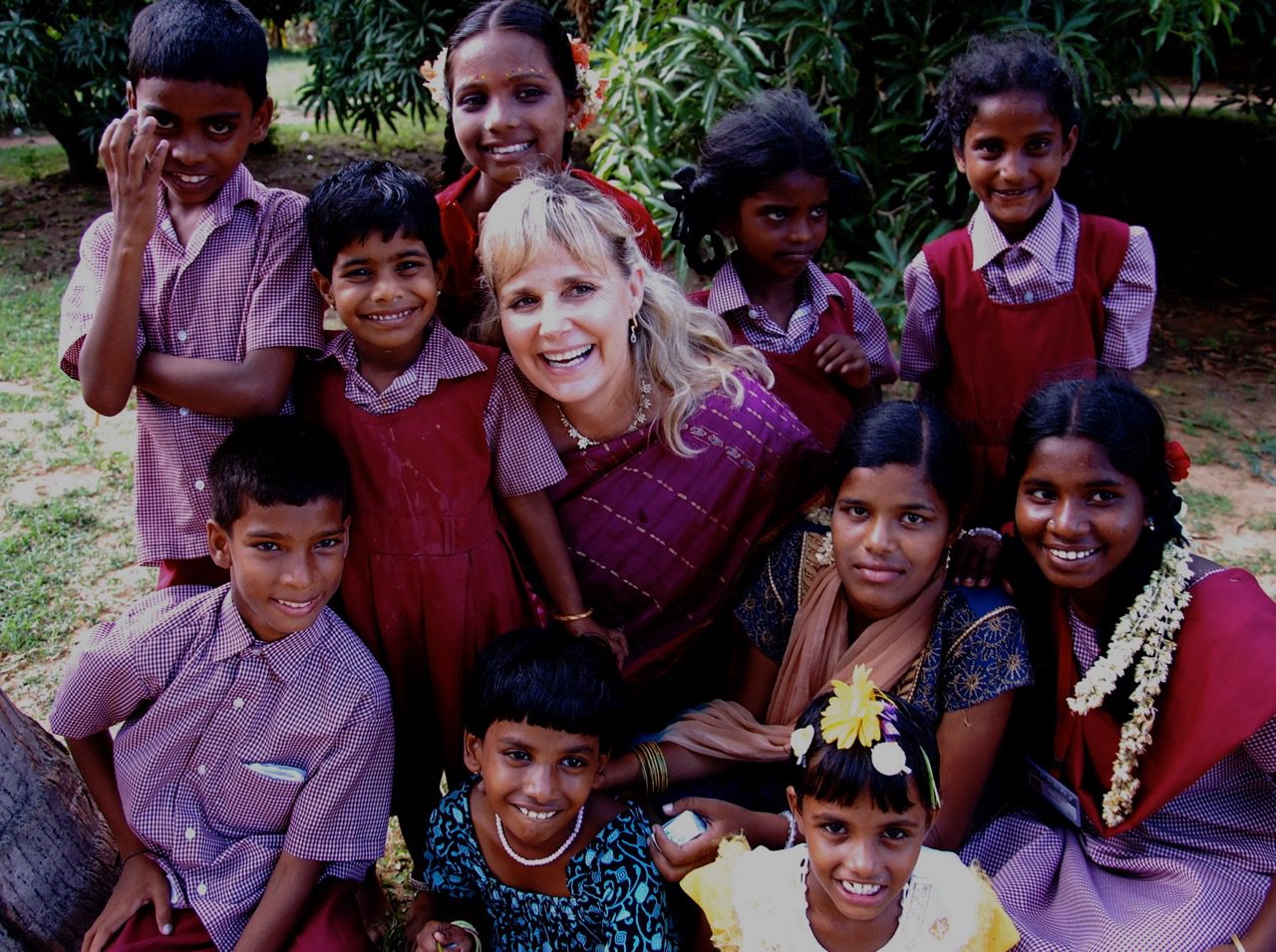 When the four of us women entered the Concord House of Jesus, in Chennai, India, we were not prepared for the sight that awaited us. There were small metal containers (they actually looked like metal laundry baskets) that I suppose were meant to be cribs, lying on the floor. They were approximately fourteen inches wide, and twice as long. Inside the “cribs” were small babies. All were malformed in one way or another. Some of the babies were extremely deformed.

The room was darkened. There was a stale smell of urine in the air. There must have been thirty-five babies lying in the cribs on the floor—all crying. All that is, except one small baby girl, who was staring at the ceiling, apparently oblivious to the wailing cries around her.

We had come to have a meeting with the director of the home to see if there was a way we could work together. The other women with me intuitively each ran to a screaming baby and scooped them up into their arms. I was fascinated by the one baby who wasn’t making a sound.   I crouched down near her box on the floor. One of the workers informed me that her name was Jennifer. There were only two workers that we could see. Both looked very harried as they went from crib to crib trying to meet the babies’ basic needs.

The babies wore only a loose shirt. Their little bottoms were naked. Some were lying in wet or soiled cribs. As my traveling companions each picked up a baby, the workers handed them a rag to hold under their bottoms, to avoid being defecated on.

I was the only one not holding a crying baby. I looked into Jennifer’s crib and tried calling her name. There was no response. She continued to stare at the ceiling. I started chatting, calling to her and talking “baby talk”. No response. I tried singing a children’s ditty, Patty cake, patty cake. . . No response. I switched to “Eeensy, weensy spider. . .” No response. The others were calling for me to grab a baby and come join them for the meeting with the director of the home.

Ignoring the others, I began to stroke baby Jennifer, starting under her chin, running my hand down her stomach and then down her stick-thin legs. She was missing her left arm. She was also missing a finger on her right hand. Her hips were dislocated and her feet each had only four toes. The touch elicited no response. It was as if I didn’t exist. Or maybe, I thought, “It’s as if she doesn’t exist.”

The others were getting impatient. “Hurry Becky, we don’t have long for this meeting.” I told them to go on without me, I would join them shortly. They looked a little put out, but finally went up the stairs with the director to her office, leaving me behind.

I continued to talk softly to Jennifer. I stroked her as I spoke. Her eyes didn’t even flicker. She stared at the ceiling intently. I continued to stroke her, wondering how long it had taken for her to become so totally unresponsive. How many times had she cried in either hunger or loneliness? How long before she had learned that she was not loved, not wanted—would not be receiving that which she craved? Little Jennifer had simply withdrawn into herself. She was nearly catatonic.

The workers kept looking at me suspiciously out of the corner of their eyes, as they continued in their rounds trying to meet the needs of so many babies. I ignored them. I kept singing, talking, and stroking. Finally after fifteen full minutes, Jennifer moved her eyes enough to catch a view of me out of the corner of her eye. She did not turn her head. Only her eyes.

That’s all I needed. I picked her up and hugged her to me. One of the workers, relieved to see me leaving their domain, handed me a rag to place under Jennifer’s bare bottom, along with a smile. I hurried up the stairs and found the door to the director’s office open. The meeting was in full swing. I quietly took the one empty chair and sat down, attempting to listen and come up to speed on what I had missed.

As everyone talked, I continued to stroke little Jennifer.

I decided to try to play a game with her. I was wearing a dress that had a chain belt. At the end of the belt was a ring. I put the ring on one of Jennifer’s big toes. No response. I continued stroking her and humming. After about ten minutes, Jennifer took her one hand and flipped the ring off her toes. Aha! A response!

I put the ring back on the toe. This time it took only about two minutes before she reached up and flipped the ring off her toe. I placed it back on the toe. Almost immediately her hand darted up and snatched the ring off her toe. The director paused mid sentence. She was looking at us in a most unusual way. She said in surprise, “I’ve never seen Jennifer smile before.” I immediately looked down at Jennifer. Sure enough, she was smiling! I put the ring back on her toe.

Jennifer and I continued playing this little game for another five or six minutes. Then to our utter astonishment, Jennifer laughed. I could feel it almost more than I could hear it. It was a quiet laugh. The director again paused mid-sentence. “We’ve never heard Jennifer laugh,” she said, stunned.

Jennifer soon tired of our game. She leaned her head against my breast. I resumed the stroking. She seemed to melt right into me.

It came time to leave. Everyone with me returned their babies to their “cribs” on the floor. I didn’t want to put Jennifer down, but realized I didn’t have any options. Tenderly, I laid her in her crib. She lifted her one arm up to me. Tears sprang to my eyes. How could I leave her? She had gone from nearly catatonic, to responsive, in only forty-five minutes. I had only stroked her. It was simple touch that had wrought this miracle. How long would it be before one of these overworked employees had the time to stroke her and sing to her? How long before she would settle back into her stupor?

I stumbled out into the bright daylight, my sight blurred by the intensity of the sun, and by the stinging tears in my eyes. I was so upset I felt myself trembling. My friend put her arm around me. “Becky, these women are doing the best they can do with what they have. . .”

As I have pondered this experience, I have often marveled at how little it took to elicit such a remarkable change in Jennifer’s behavior in only 45 minutes.

Back at home, I thought of Jennifer as I watched a youth in my ward who seemed to be “lost.” She didn’t seem to relate to the others in her class. She was overweight and had skin problems. The others basically ignored her.   Feeling unattractive and not wanted, she had withdrawn into herself. What would it take, I wondered, to bring her out of her dark isolation and into participation in life with enthusiasm and joy? How could I communicate love and acceptance to this lonely, misfit teenager? I couldn’t stroke her and play games with rings on her toes! No, her wounds and isolation were too deep and her walls were too thick.

Then I watched a beautiful thing happen. My friend invited this lonely girl to help her cook for a ward event. As they worked together in my friend’s home this young lady slowly began to respond to inquiries about her interests. My friend kept finding jobs around the house and hired her to help out. Over time, as they worked together they laughed together and became friends. My friend started using her as a babysitter. As months went by, I eventually saw a change in this shy girl as she felt there was someone at Church who valued her and looked forward to seeing her each week.

By the time a young woman reaches her teens, it takes more than 45 minutes of love to undo years of feeling left out. But it was also surprising to me how this sweet girl began to respond after just the first time my friend reached out.

In every neighborhood and in every ward in the church there is a teenager, a Primary child, or even a woman in Relief Society, or a man in Priesthood who needs validation as to their worth.   It seems there’s always at least one who seems to hang back, interact awkwardly with others, feel shunned. There is a hunger to feel loved, to feel valued.

We’re all busy people with “to do” lists that drive our days! If we can find it within us to make just a little bit of time to notice others, to open our hearts to another person in need and reach out to them in even a simple way, we can be a catalyst to create healing.

I have an interesting update to this story. One of Meridian's Readers contacted me to tell me that she had been adopted from the same orphanage, the Concord House of Jesus! She asked if I could help her connect to anyone at the orphanage. We tried for several weeks to find a connection, but the orphanage has been shuttered for many years and no one knows of any way to find the previous owners. It reminded me of the movie, "Lion" and of the Book, "The Orphan Keeper". In both of these true stories, adopted children from India found their birth parents against all odds. My prayer is that this young lady will have the same blessing. We still have out feelers in India for any hint of the previous owners or workers at this orphanage. I'm a firm believer that there is no such thing as a coincidence!

I am from Iraq, and once saw an orphanage where all the babies laying directly on the courtyard floor, some totally naked! I tried contacting an NGO, but was told that they were overloaded with caring for such babies. Apparently there was no war that some of these babies could be helped or adopted. Personally, I was unable to return to Iraq as my family and I had already escaped as political refugees! Short of prayer, I am not sure what we can do for babies/children who are uncared and unloved? I fear that they will be suffering during their mortality until death brings relief. I often pray that when they pass through the veil of death there will be a good welcome for them in the Spirit World., or in the Celestial Kingdom.