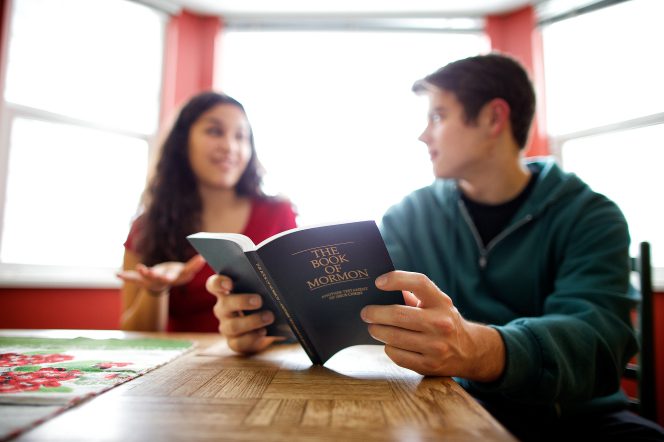 It’s Never Too Late to Have a Happy Childhood

When a prominent German businessman who was working with our ward’s missionaries was growing up in Germany, he had an experience that forever impacted his life–at the age of six, he saw the Mormon Tabernacle Choir perform in his country as part of a world tour.

“At the time,” he said, “I thought it was the most beautiful thing I had ever heard.”  From that point on, he set out on a life-long quest to, as best he could, learn about this people and their religion that made them seem, to him, “almost like angels.”

In a different scenario, it was not that long ago that, while tracting one day with Elder Jared Johansen, young Preston Foulger found a teenage boy who yearned to know more about the gospel.  Several weeks and several discussions later, Preston waded into a water-filled font to baptize his new friend.

Earlier that summer, Elder Tim Walmsley and Elder Kyle Melling of the Montgomery Chinese Branch were eating lunch in a Chinese restaurant when a young teenage employee started talking with them about the Church. They invited him to come to church and, to their surprise, he showed up the following Sunday. Though dependent on branch members to give him rides, he continued to come nearly every Sunday afterward and planned to be baptized as soon as his father said he was able.

At the annual Potomac Days Festival always held the last Saturday in October, the Church had an informative booth, staffed by missionaries from the Bethesda and Potomac Wards. In spite of early morning rain, it turned out to be a beautiful day and the crowds were far larger than years past.

The elders in the booth had an opportunity to talk with a lot of people, handing out information on the Visitors Center, as well as pamphlets, DVDs, and copies of the Book of Mormon to anyone who asked.

Among those in the latter category was a friendly young man who looked to be about ten or eleven.  He told us of all the Mormon kids he knew from his school and asked, somewhat shyly, but with great sincerity, “Do you think I could have a Book of Mormon of my own?”

“Do you mean to tell me that, with all of these Mormon friends you have, not one of them has ever given you a Book of Mormon.” I asked incredulously.

“No, they never have,” he responded, and then repeated his question, “Can I have one?”  His request was granted and, as he held the book in his hand, a supreme look of contentment crossed his face.

As I watched him walk away, I thought of Matthew 18:3 which says, “Except ye be converted and become as little children, ye shall not enter the kingdom of Heaven.”

Then I realized just how important it is for youth to gain a strong testimony before they become too jaded by the world—and what a great opportunity we have been missing.

The book of Proverbs tells us, “Train up a child in the way that he should go and when he is grown he will not depart therefrom.”

As I think about the Primary, and what a great job it does in teaching gospel life skills to the young spirits over which it maintains its stewardship, I am mindful that there are still many who aren’t being given such a strong foundation.

A recent article in the New York Times, reported. “Despite their packed megachurches, their political clout and their increasing visibility on the national stage, evangelical Christian leaders are warning one another that their teenagers are abandoning the faith in droves.  At an unusual series of leadership meetings in 44 cities, more than 6,000 pastors are hearing dire forecasts from some of the biggest names in the conservative evangelical movement.”

“Their alarm has been stoked by a highly suspect claim that if current trends continue, only 4 percent of teenagers will be “Bible-believing Christians” as adults.  While some critics say the statistics are greatly exaggerated, there is widespread consensus among evangelical leaders that they risk losing their teenagers. The board of the National Association of Evangelicals, an umbrella group representing 60 denominations and dozens of ministries, passed a resolution deploring the “epidemic of young people leaving the evangelical church.

“This generation is not about church,” said Ms. Sandler, an editor at Salon.com.  “They always say, ‘We take our faith outside of the four walls.’ For a lot of young evangelicals, church is a rock festival, or a skate park or hanging out in someone’s basement.”

While that may be true for many other Christian denominations, I don’t believe it to be true in ours.  Divinely inspired youth programs such as Primary, Mutual, Seminary, and Personal Progress guide our youth to become strong men and women of God, better able to withstand the temptations of the world.

Regardless of what statistics show, I believe that today’s youth really do need and want the comforting message the gospel has to offer and will accept it if we will share it with them.

There’s a bumper sticker I’ve seen on many occasions that says, “It’s never too late to have a happy childhood.”

As children of God ourselves, as we think about the missionary opportunities that cross our paths each day, may we not overlook the youth in our lives and be mindful of our responsibilities to reach out to them with love and patience and communicate to them their divine potential.