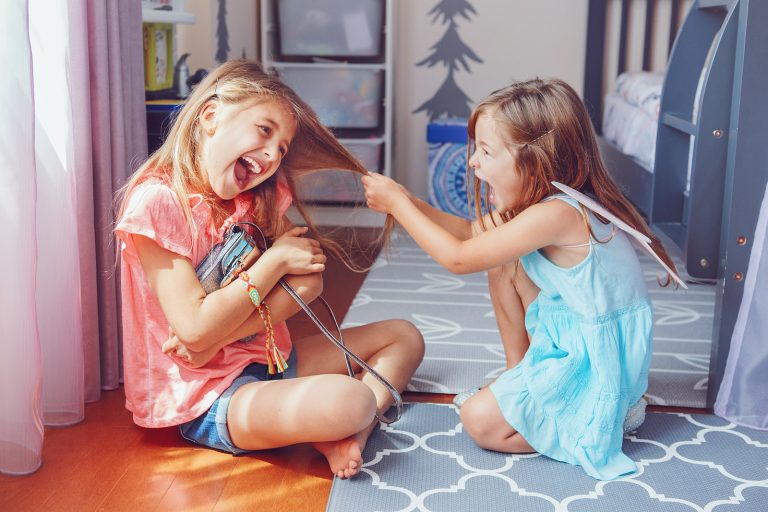 Is More Love at Home Possible?—On Fighting, Quarreling, and Contention

Growing up in the 1950s, my family was probably very typical of the times in that emotions and strained relationships were never discussed, which is only a slight overstatement. Whenever there was an unhappy dynamic, we children were reminded that King Benjamin said contention was of the devil. Whatever we were doing was shut down, either by my father laying down the law on how we were expected to behave or by my mother diverting our attention to something extraneous. These were the days of the family sitcom, “Father Knows Best.” How I wanted my family to be like the Anderson family where misunderstandings were humorously acknowledged and quickly resolved to everyone’s benefit. But in the bumpiness of real family life, less than perfect episodes happened.

As a young mother I needed to know if I should parent like my parents, so I started reading child-rearing books, specifically seeking better ways to handle contention. It was tricky because the word contention seemed ambiguous, a one-size-fits-all generalization that included everything from spats at the dinner table to war. Contention was also a marriage issue. Was I sinning or trying to resolve issues when I discussed problems with Richard, sometimes at length and with zeal? My hope was to have a loving family who knew how to work through bumpiness. If I labeled every family disagreement as contention and blamed the devil, I felt I was sweeping debris under the rug and skirting underlying problems.

When I fact checked King Benjamin’s statement, I saw that he doesn’t use the word contention. Rather: “Ye will not suffer your children that they go hungry, or naked; neither will ye suffer that they transgress the laws of God, and fight and quarrel one with another, and serve the devil” (Mosiah 4:14). I understand clothing and feeding children, which are in parent’s control. But parents don’t suffer their children to fight and quarrel, although the do suffer through it. I think it is fair to say that almost all children come with the natural disposition to want things their way.

I discovered it was Jesus who linked contention and the devil: “For verily, verily I say unto you, he that hath the spirit of contention is not of me, but is of the devil, who is the father of contention, and he stirreth up the hearts of men to contend with anger, one with another” (3 Nephi 11:29). I also looked up the 189 times contend, contended, contention, and contentious are found in scripture. The Book of Mormon has 138 of those references—74%. Looking at words paired with contention increased my growing awareness that contention is much more serious than family bickering.

The spectrum of contention ranges from having “the spirit of contention,” which I interpret as angry, hateful thoughts, to using anger and abuse to control or have power over a fellow human or groups of humans. The clarity certainly has helped me look at family arguments as opportunity rather than as devilish. Some back and forth in an attitude of solving problems rather than suppressing them, some give and take, some forgiveness, some repentance is essential in the microcosm of preparing children to function outside the protected environment of the home. Likewise, married couples learn unity, how to be in the same boat rowing the same direction, with practice and patience.

One family teaches their young children to identify emotions right along with shapes, alphabet letters, and numbers. They cut circles out of colored cardstock the size of a face and drew a different emotion on each face—a frowny face, a happy face, an angry face, a confused face, a silly face. Then they glued on Popsicle sticks for handles. When they ask each other, “How are you feeling,” the child or adult can choose the face that represents his/her feelings. Then they talk. I think the bottom line for these children will be that emotions are normal, adults have emotions, too, and talking about emotions is a good thing.

My father was a colonel in the U.S. Army and a high school principal. He believed children should respect authority and obey promptly. He was a father-knows-best father who expected decorum on every level. This left little wiggle room for five daughters who had hormones aplenty. When one of us would say or do something that stretched his patience, he would declare a ruling like judge, jury, and executioner. But there were times, if the child or teen began to nicely explain the whys of the situation, he would listen and say, “I stand corrected.”

I have a friend who grew up in a home where swearing and blaming were a part of everyday life. I spent time in this home and heard it for myself. As the children in this family grew up, they realized how loud, accusatory language drove away any good feelings. When I was in college, I happened to have a class with this friend. One day we were talking about growing up and he said to me: “I am sorry you had to experience my parent’s language. I have vowed not to pass it on to the next generation.”

4.  Teach by identifying and discussing how you contributed to the problem

Because marriage is the core for love at home, I include these words from Twelve Rules for Life, byDr. Jordan Peterson: “In nearly thirty years of marriage my wife and I have had… sometimes a deep disagreement. Our unity appeared to be broken, at some unknowably profound level, and we were not able to easily resolve the rupture by talking. We became trapped, instead, in emotional, angry and anxious argument.” When this happened, “we agreed that… we would separate, briefly: she to one room, me to another. This was often quite difficult, because it is hard to disengage in the heat of an argument…. Alone, trying to calm down, we would each ask ourselves the same single question: What had we each done to contribute to the situation…. Then we would reunite and share the results of our questioning [and say]: Here’s how I was wrong….” Dr. Peterson acknowledges that everyone wants to be right and win the argument, but if you win your spouse loses. Do you really want your spouse to lose, especially when he or she is your companion for eternity? He adds the caution that as painful as this process may be, it is much better than taking the easy route of “turning your attention away from the truth and remain(ing) willfully blind” (Jordan B. Peterson, Twelve Rules for Life an Antidote to Chaos, Random House Canada, 2018, 356-7). This, of course, works with children, too.

5.  Teach under the direction of the Spirit

Praying for the Spirit in personal and family prayers and praying additionally for heaven’s help in tense parenting moments have been my lifeline. When I have stopped in the middle of family unpleasantness to pray, that prayer is like a deep breath, a mini timeout, a pause button. Prayer can calm the inclination to react negatively. Prayer can turn up the volume on promptings. What an incredible blessing to get the Holy Ghost’s divine help. His knowledge of your particular situation and his repertoire of ways to build more love at home is expansive. “And by the power of the Holy Ghost ye may know the truth of all things” (Moroni 10:5).

Sometimes I have felt to remove myself from the situation temporarily by taking a long bathroom trip, sometimes to smile at each person involved, other times to sit down next to a child, often to ask questions, stop talking, listen, and not interrupt. There are times to stay firm and let the child feel the full weight of consequences and other times to show mercy. Sometimes the Holy Ghost reminds me that my primary responsibility is to nurture, nurture, nurture—serve and love, serve and love, serve and love.

Every time I read the Book of Mormon, my heart aches for Lehi and Sariah who despite their best efforts never achieved love at home. Their oldest sons, Laman and Lemuel, refused to resolve differences with their younger brothers, Nephi and Sam. Their fighting and quarreling intensified and became severe contention that spread to the next and the next and the next generation until one thousand years had passed. The tragic end came when Laman and Lemuel’s descendants annihilated Nephi and Sam’s.

The Book of Mormon also gives the opposite outcome. For two hundred years after the coming of Jesus Christ, the people lived in peace with no contention. Not any. “And it came to pass that there was no contention in the land, because of the love of God which did dwell in the hearts of the people” (4 Nephi 1:15). This is prophesied to happen again after the Second Coming of Jesus Christ when there will be love in every home and peace worldwide for the thousand years of the Millennium.

But for now, while we wait, we can pray “for the love of God to dwell in (each) heart” and for the ability to teach each other ways that will “knit (us) together in unity and in love one towards another” (Mosiah 18:21). Is more love at home possible? I think so. I hope so.

Thank you for clarifying the difference about contention versus other negative emotions that is very important to understand. I am afraid I sometimes have judged what is happening too harshly but will try to do better. I appreciate the suggestions so much as a mom of five there is a lot of drama and arguing in our home.