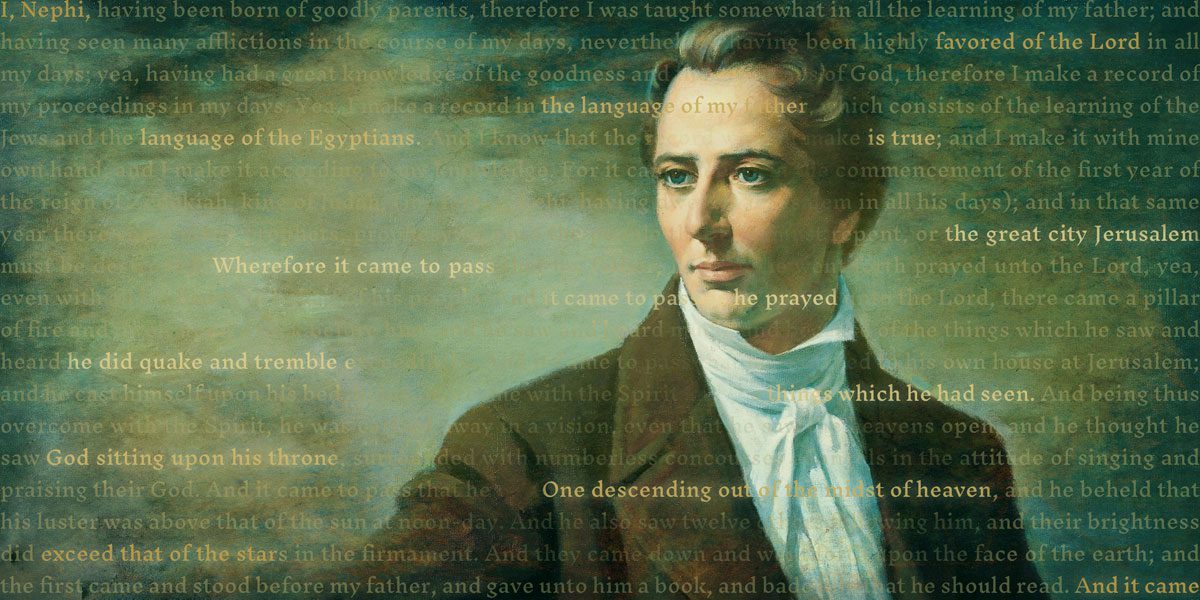 Is It Possible That a Single Author Wrote the Book of Mormon?

“For the Lord God hath said that the words of the faithful should speak as if it were from the dead.”

Editor’s Note: In a previous KnoWhy, a brief introduction to stylometry and a review of stylometric studies on the Book of Mormon was presented.1 Building on that foundation, this KnoWhy discusses recent stylometric research exploring the ability of novelists to create distinct authorship styles or “voices” for multiple fictional characters

To date, the combined data from several valid stylometric studies on the Book of Mormon have demonstrated that it has multiple, distinct writing styles and that those styles are consistent with the authors designated within the text itself.2 One may naturally wonder, though, if the Book of Mormon’s diversity of style is in any way unique or impressive. Is it possible that a creative writer could have produced its variety of distinct styles?

Their results show that, to varying degrees, each author was able to create a distinct voice for multiple fictional characters, including the narrators, in their stories. As the following graph demonstrates, the narrators form clusters on the left, while the fictional characters form somewhat looser clusters on the right. Each dot represents a 2,000-word chunk of the character’s text. 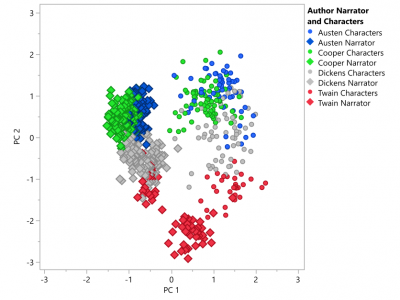 Because in all cases the narrators had distinctly different function word frequencies than non-narrators, the research team re-fitted the PCA to only assess the diversity of voices among non-narrators. On these non-narrator voices, they performed four separate multivariate tests,6 all of which resulted in statistically significant differences among character voices.7

The combined data from these tests show that the differences in function-word patterns among the non-narrator characters of these four authors are significant. Statistically speaking, it can be said that Mark Twain’s character, Tom Sawyer, really does have a different “voice” than his friend Huckleberry Finn, and that the voice of Jane Austen’s Elizabeth Bennet is truly distinct from her love interest, Mr. Darcy. While these characters’ voices still generally cluster together by the author who created them, they are distinct enough to consider them as statistically separate from one another.8 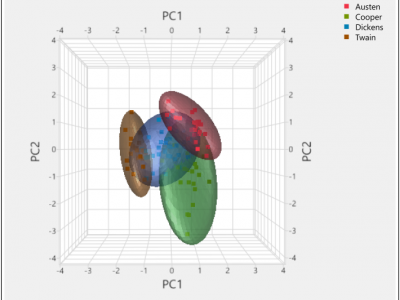 Comparison of the voices of different 19th century authors. 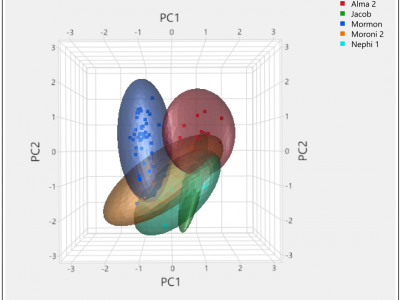 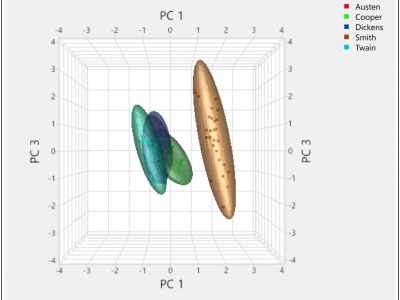 These statistical results provide striking support for the Book of Mormon’s internal claims about its authorship.11 Even if Joseph Smith had been a skilled and experienced writer, in order to fabricate the Book of Mormon, he would have needed an ability to create distinct fictional voices that was beyond some of the greatest novelists of his day. Yet Joseph himself, and those who knew him best, all insisted that he was relatively uneducated.12

Furthermore, literary scholar Robert A. Rees has argued that in contrast to the great works produced by Joseph Smith’s Romantic Era contemporaries, there is no evidence that he engaged in any preparatory literary efforts before translating the Book of Mormon.13 Rees explained,

There is … no evidence that [Joseph] was keeping a journal or developing his writing style, no record of his writing sketches or short stories, no indication that he was creating the major characters of the Nephite history, planning its plots, or working out the major themes and ideas found in its pages; nor is there any evidence that he was consciously developing an authorial voice or cultivating a personal writing style (or that he even understood what this would have entailed). Neither did he exhibit any proclivity for composing large narrative forms or differential styles or anything at all like the complex, interwoven, episodic components of the Book of Mormon.14

This situation makes the results of the stylometric analysis all the more astounding. It is difficult to imagine that a frontier farmer, with limited formal education and no literary accomplishments whatsoever, could have created a work of fiction with such a diverse array of statistically distinct voices.

Moreover, previous stylometric studies have demonstrated that none of the 19th century writers usually suspected of authoring the Book of Mormon have writing samples that match any of its distinct styles. These writers include Sidney Rigdon, Solomon Spalding, W. W. Phelps, Oliver Cowdery, Parley P. Pratt, and Joseph Smith himself.15

Thus, in order for one of these candidates to be the true author of the Book of Mormon, he would have needed to write in such a way as to completely mask his own style while at the same timecreating a diversity of voices that was beyond some of the most talented novelists of their day! This combination of achievements seems highly unlikely for any of them, and especially for Joseph Smith, who was the least educated and experienced of them all.16

In contrast to this scenario, the Book of Mormon’s own claims about its authorship can easily accommodate the results of this recent stylometric analysis. If the Book of Mormon’s source texts were truly written by a large number of ancient prophets over the course of a 1,000 years, then that would naturally explain why its voice diversity is greater than the composite diversity achieved by four of the most distinguished novelists of the 19th century. In light of these recent findings, it can be said that stylometry’s statistical methods have once again helped us discern “the evidence of things not [otherwise] seen” (Hebrews 11:1).17