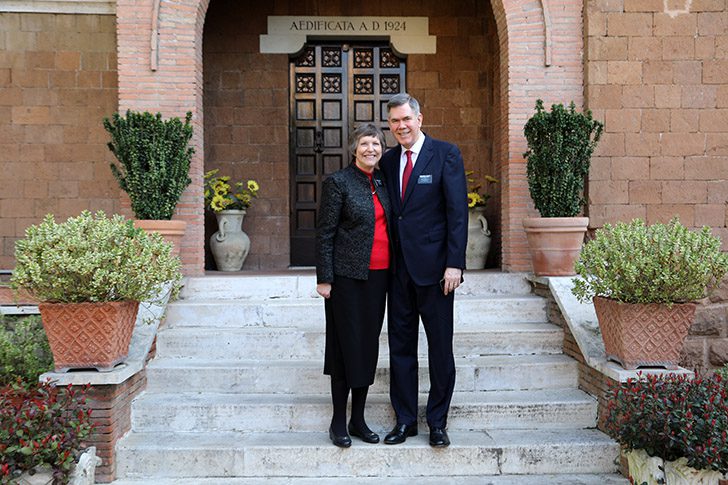 To see all of Meridian’s coverage of the Rome Temple, visit latterdaysaintmag.com/rome.

When Michael and Marian Pickerd met while serving as young missionaries in the Italy Rome Mission from 1977-1979, they thought nothing of it—their paths crossed only briefly while serving in Naples at the beginning of their missions. They could have never foreseen as they labored in the small branches of Italian Latter-day Saints that one day they would return to Italy together, this time to preside over their own mission and witness the dedication of the Rome Italy Temple.

Though getting called back to their own mission as a married couple was exciting, it was no shock to the Pickerds. As President Pickerd was finishing an assignment overseeing the Phoenix Arizona Temple dedication, they felt like they needed to prepare to serve a mission. They knew that both Italian missions were open for new mission presidents, and as soon as they got their call to Rome, President Pickerd went to his employer and told him, “I’m going to retire April 1st. I’m going to go to Italy for 3 years to live in a villa and watch over 400 plus young people.” President PIckerd was sure his employer thought it was a joke until he actually did it.

Arriving back in the mission they had served in together was simultaneously familiar and totally new. They walked the same cobblestone streets, arrived at the same mission home where their mission president had lived and where they had once attended district meetings, and enjoyed the same kind, family-oriented, life-loving Italian culture they grew to love so much before. But missionary work had changed drastically since 1979.

New missionaries arriving to the mission over the past ten years have been brought to the temple lot or “Monte Sacro” (“sacred mountain” in Italian), which was once a field, to dedicate their missions to the Lord. The week of the temple dedication, the Pickerds brought their first group of new missionaries to the temple visitor center to sit at the feet of the statues of the Christus and Apostles to consecrate their missions to Jesus Christ. In such a spirit-filled environment, they discuss what legacies they want to leave behind when their missions are done.

President Pickerd said there is no question that the coming of the Rome Temple has increased missionary enthusiasm for the work and individual conversion and love for the gospel and the temple. “As mission president, your first responsibility is to get them all get back safe and sound, and your next responsibility is to have them each have a stronger testimony of the Atonement of Jesus Christ and the Restoration. When President Nelson set me apart, he said to engrave on the marrow of their bones a testimony of the Savior Jesus Christ and His Atonement.” The temple has helped to do just that for the elders and sisters.

Not only has the temple and temple lot become something significant to the missionaries, but the stunning structure and conspicuous location along the ring road that goes around the periphery of the city has brought the people of Rome a greater awareness of The Church of Jesus Christ of Latter-day Saints. Sister Pickerd remarked that the Church has greater credibility now than they have had before because in a good portion of the city people recognize the new temple and know what church it was built by. Many years ago, there were TV programs in the country that gave people the idea that the Church of Jesus Christ was like the Amish. Now, Italians have a new frame of reference to learn about the Church.

Along with the 55,000 people who attended the temple open house, the mission got over 2000 referrals, a large portion of which requested visits to their homes and further information about the Church, the Book of Mormon, and the temple. The majority of these referrals were from people living right around the temple. Not only does it stand as a religious beacon to the neighborhood, but the visitor center, family history and beautiful grounds will continue to be a gathering place for the community and a blessing to the surrounding area.

One family who had been feeling like they wanted to come back to church heard their branch had reserved a bus to take members to see the temple open house. They decided to go as a family and their experience was so profound that their 17-year-old daughter who had not yet joined the Church decided there at the piazza of the temple that she wanted to be baptized.

Though the work is progressing, there are innate challenges to preaching the gospel in Europe and in Italy. Secularism is becoming more and more prominent in the Northern Hemisphere. President Pickerd observed that if you look around to where the church has been closing and opening missions, they have been closing in the Northern Hemisphere and opening in the Southern Hemisphere. Secularism takes on a lot of forms, and in many instances, though people are not practicing Catholics, Catholicism is so foundational to their family and culture that they resolve to die Catholic no matter what.

Even those that do get baptized often leave Italy for better economic opportunities. While the mission has quite a few baptisms, in many instances ward and branch sizes remain the same because people are consistently moving away to other parts of the EU for work.

Regardless of the challenges, however, the Pickerds see the temple as an immense blessing for the Italian people they have grown to love so dearly and for the missionaries laboring to spread the gospel. With so many opportunities to share the gospel having a new temple in the city and technology revolutionizing the way missionary work is done, the Pickerds still emphasized that no matter what opportunities or techniques missionaries use, the Spirit is key.

Street contacting can work, knocking doors can work, getting referrals can work, temple open houses can work, but Sister Pickerd said, “What doesn’t work is when you go out and you work hard but you work without following the Spirit. You need to be guided to what to do that day…so that you’re not just working hard but you’re working with the Spirit.”

The Pickerds have striven for the Spirit as they have led the Italy Rome Mission, and though they will return home soon, their hearts and their legacy will remain with the Italian people they have loved since they were young.