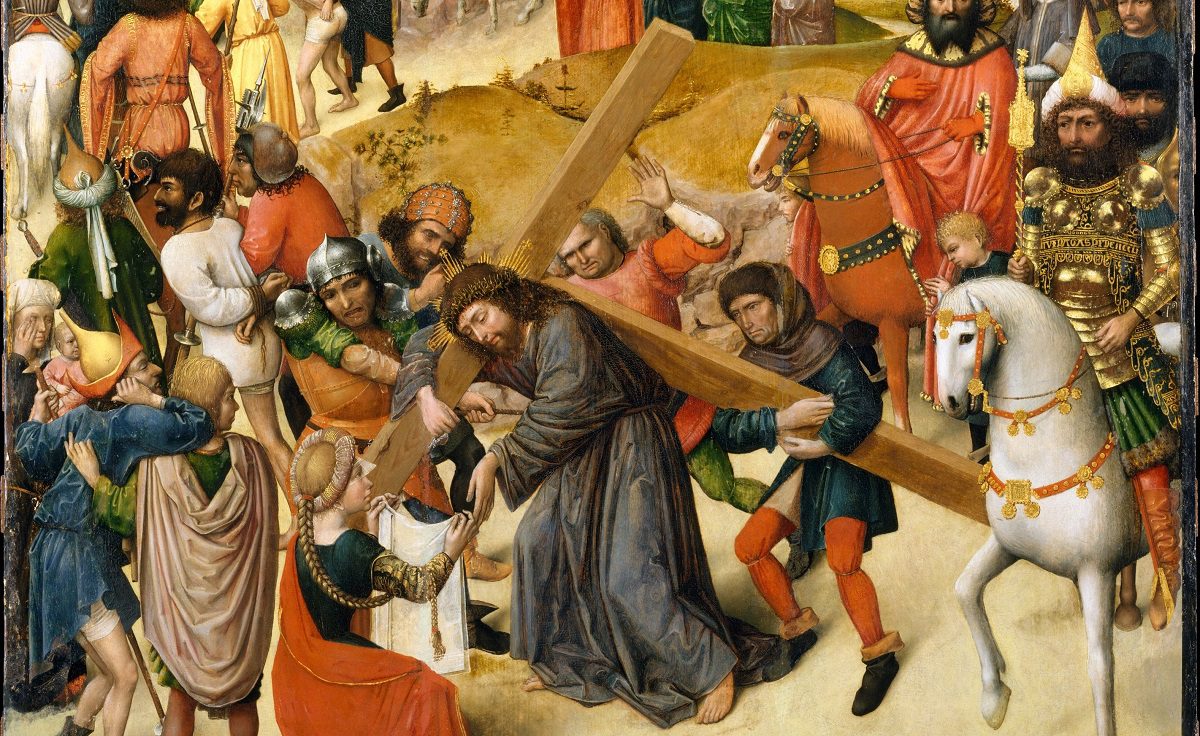 How is the Day of Atonement Understood in the Book of Mormon?

Cover image: “Christ Bearing the Cross” by a North Netherlandish Painter via The Met.

In the Book of Mormon, being clean is important. 1 Nephi 10:21 states that “if ye have sought to do wickedly in the days of your probation, then ye are found unclean before the judgment-seat of God; and no unclean thing can dwell with God; wherefore, ye must be cast off forever.” This verse suggests that doing “wickedly” is symbolically connected to being unclean. Looking carefully at ritual cleanliness laws in the Old Testament in light of the Day of Atonement ceremony can help explain how we can become symbolically clean and enter into the presence of God.

According to the Law of Moses, many things could make a person ritually unclean. The Medieval Jewish writer Maimonides stated that there are so many different kinds of uncleanliness, that at any given moment, “only a few people are clean” based on the ritual cleanliness laws of the Old Testament and Jewish law.1 One of the main issues with being unclean was that it meant that a person had to be separated from other people for the rest of the day, and in that way were cut off from the covenant people for a period of time (see Leviticus 11:24–40).2

Although being unclean under the early Mosaic Law was essentially addressed as a physical problem (see Leviticus 5:2–3, 11:47), according to Leviticus 10:10 Aaron was supposed to make a distinction between the “holy and unholy, and between unclean and clean.” This seems to involve and connect both the physical and spiritual aspects of being clean and unclean. An ancient commentary on Leviticus called the Sifra, commenting on Leviticus 19:2 similarly states, “‘Ye shall be holy,’ which is to say, obedient to His commandments,” and goes on to explain that breaking commandments brought upon a person a kind of uncleanness.3

This connection between spiritual and physical uncleanness implies that if someone is cut off from the physical presence of the people of God for being physically unclean, then they would be cut off spiritually from God Himself for being spiritually unclean until that condition of impurity was removed. Amulek explained this in Alma 11:37 when he stated that “no unclean thing can inherit the kingdom of heaven … therefore, ye cannot be saved in your sins.” Later on, in Alma, we are even told that our uncleanness means that we will be cast out if we do not repent (Alma 40:26).

Therefore, in a spiritual sense, Maimonides was right. There are so many ways in which a person can become spiritually unclean that humanity is seemingly left without hope. Only Christ can bridge that gap between unclean or sinful humanity and an ultimately clean and purely righteous God, and the Nephite understanding of the Law of Moses helps to explain this point.4

One set of Mosaic rituals performed on the Day of Atonement, illustrates this well. Leviticus 16 explains the rituals of Yom Kippur, or the Day of Atonement. The sacrifices on this day were meant to cleanse the entire nation of their sins (see Leviticus 16:21). It was particularly meant to redeem the temple from the uncleanness acquired through unworthy patrons who may have come to the temple after becoming unwittingly unclean (v. 33).5 If a person became aware that he or she had sinned “through ignorance,” they were to bring a personal sacrifice as a “sin offering” (Numbers 15:27–29), but the high priest’s sacrifice on Yom Kippur atones for all defiling transgressions—even those that remain unknown to us.

On that day, the high priest would offer a bullock, a ram, and a goat and set aside a second goat for another offering (Leviticus 16:14–15, 21). Then the high priest would do something that he did only once a year: he would go into the Holy of Holies and cleanse that most sacred place with the blood of the animals he had sacrificed (v. 19). That accomplished, he would put his hands on the second goat and symbolically transfer the sins of all the children of Israel onto that animal (v. 21). Finally, a previously appointed man would lead that goat out into the desert, away from the people, thus symbolically taking away the sins of the nation (v. 21). 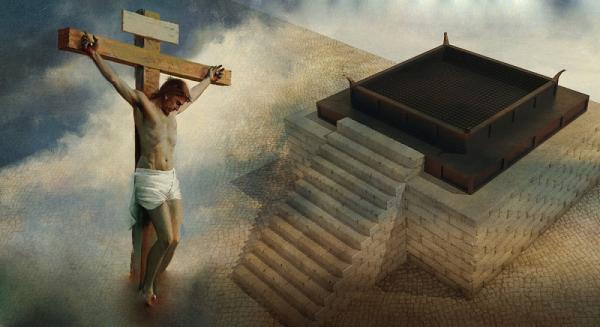 Image featuring The Crucifixion by Harry Anderson and illustration by 2dmolier via Adobe Stock.

The Book of Mormon sometimes appears to refer to this Day of Atonement ordinance, and part of the reason it does may be to emphasize the universal nature of the Christ’s Atonement.6 The universal Atonement, in opposition to the universal uncleanness humans experience, is illustrated in 2 Nephi 2:10. This verse states that it is the intercession for all that brings all men to God, and it is this universal intercession that answers “the ends of the atonement,”7 as people turn away from “all their sins” (Mosiah 27:35; 3 Nephi 3:25; 5:3; 27:19; Moroni 6:2).

There is an additional aspect of the Day of Atonement that is expanded upon in the Book of Mormon, and that is salvation for accidental defilers. In Leviticus, it seems that the Day of Atonement takes care of only those who accidentally bring uncleanness into the sanctuary. 2 Nephi 9:26 seems to expand this celestial bounty even to those “who have not the law.”8This means that those who may defile unwittingly in a spiritual sense, because they do not even know that defilement can occur, can still be redeemed by the sacrifice of the Lamb of God.9

In the same way, Mosiah 3:11 also states that the blood of Christ atones for the sins of those who have died “not knowing the will of God concerning them, or who have ignorantly sinned,” which likely includes both those who sinned ignorantly because they did not understand the concept of sin, as well as those who know the law, but accidentally might have contacted any impurity that would defile the sanctuary as well.10

One final connection to the Day of Atonement comes in Mosiah 4:2, when the people felt the forgiveness of God, and they asked that the Atoning blood of Christ be “applied” to them. The concept of atoning blood being “applied,” may refer to Leviticus 16:14–19, 27, in which the priest would apply blood to various parts of the temple, thus purifying them.11 In the same way, Christ’s blood, symbolically applied to us, through His Atonement, can cleanse us from the symbolic impurity we all experience through sin.12 Leviticus puts it well, “It is the blood that maketh atonement for the soul” (Leviticus 7:11).

All of this is vitally important. Understanding and receiving the blessings of the Atonement of Jesus Christ and knowing Him as the One whom the Father sent is what eternal life is all about (John 17:3). More than any other book of scripture, the Book of Mormon clarifies the full operation of His Atonement in our day.

At first glance, it may be difficult to see how the ancient laws of Moses relate to Christians living in the 21st century. Christians today no longer keep the Law of Moses, so the ritual cleanliness paradigm for cleansing physical impurity may seem distant and unimportant. But Jesus said that His purpose was not to destroy even one jot or tittle of the law, but “to fulfil” and give eternal purpose to even “the least of these commandments” and principles (Matthew 5:17-19).

Modern people may no longer think of “sin” as including an unintended mistakes or inadvertent errors. However, all people are spiritually unclean. Sometimes we are unaware of our spiritual deficiencies and shortcomings. Sometimes we are self-deceived, not acknowledged our problems, things that we may have said or done that still are harmful to other people and must therefore cause sorrow to God. For all such things, everyone must still offer their own sacrifice in humbly asking Jesus Christ to apply His atoning blood to cleanse us. Christians no longer offer animal sacrifices, but today each person is expected and required to offer consciously instead “a sacrifice [of] a broken heart and a contrite spirit” (3 Nephi 9:20).

Image by Book of Mormon Central.

Every Christian today must believe in and accept Christ’s atonement to the same degree that the righteous prophets, priests, and kings in ancient Israel did. While recognizing that “to do justice and judgment is more acceptable to the Lord than sacrifice” (Proverbs 21:3), this did not mean that sacrifice was unimportant. And while “the sacrifice of the wicked is an abomination” (Proverbs 15:8), the sacrifices of the righteous were always a delight unto the Lord (Deuteronomy 33:19; Psalms 4:5; 51:19).  We must sacrifice wholeheartedly as the Lord has now commanded and look willingly to Him, allowing His atoning blood to cover our countless sins.

The people in the Book of Mormon had great faith that the redeeming Messiah would come in the future. Nephi declared, “Notwithstanding we believe in Christ, we keep the law of Moses, and look forward with steadfastness unto Christ, until the law shall be fulfilled. … Wherefore the law hath become dead unto us, and we are made alive in Christ because of our faith” (2 Nephi 15:24–25). The Nephites dedicated themselves to “look forward unto that life which is in Christ, and know for what end the law was given” (2 Nephi 25:24–27). We can look back on both the Law of Moses and Atonement of Christ, and know why the Law was given. The saints of God must have just as much faith in Christ’s coming in the past as those people had in His coming in the future. His atonement is infinite and eternal, truly reaching into all time: past, present, and future.

Christ did come. His blood atones for the sins—of all kinds—of all people. Each human being has sinned, sometimes unwittingly, and each human being experiences the anguish of being in a fallen condition. Only Christ can make each person completely clean, without spot. His atonement reaches every fiber of our being. Through Him, all people can become absolutely clean. All He asks is that each person willingly turn to Him, thank Him for all that He has done, cured, and fixed, and continue to lovingly and faithfully walk the path that leads to Him.