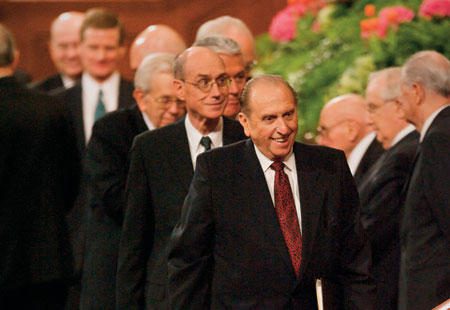 How is President Monson’s Health?

Questions have been prompted about President Thomas S. Monson’s health since he recently sidestepped a meeting with President Barack Obama, when he came to Salt Lake, and cut back on his speaking appointments in General Conference.

Last week the age of leadership in the LDS Church was the topic of KUER’s Radio West where scholars Richard Bushman and Gregory Prince weighed in. The LDS Church made this statement:

“President Monson is 87. It’s natural that he and others in Church leadership are feeling the effects of advancing age. However, he spoke publicly at General Conference earlier this month and attended all the meetings. He comes to the office every day, attends all First Presidency and committee meetings, leads the discussion, and makes decisions. The workload of the First Presidency is up to date.

“President Monson has always been private about his health, but appreciates the prayers and sustaining support of Church members as do all of the First Presidency and the Twelve.”

The photo above is of President Monson leaving a session of conference.

It is typical of President Monson to concern himself with others, rather than to focus on himself, so I'm not surprised he is more private. If any of the rest of us make it to 87, I'm guessing we won't be in the peak of condition either. However, he will be sustained to do what is necessary until God calls him home to his well-deserved reward.

Wow, a lot of grouches here. I side with the group of commenters who support the Church, Pres Monson, his privacy, and Meridian who are just trying to run interference for Pres Monson and the Church and to invite the naysayers, complainers, know-it-alls and critics who, for months, have speculated on various health conditions they supposedly 'know' Pres Monson has and/or the complaints about the Church not being transparent enough about his health blah blah blah. THAT is the reason for this article. Thanks Meridian.