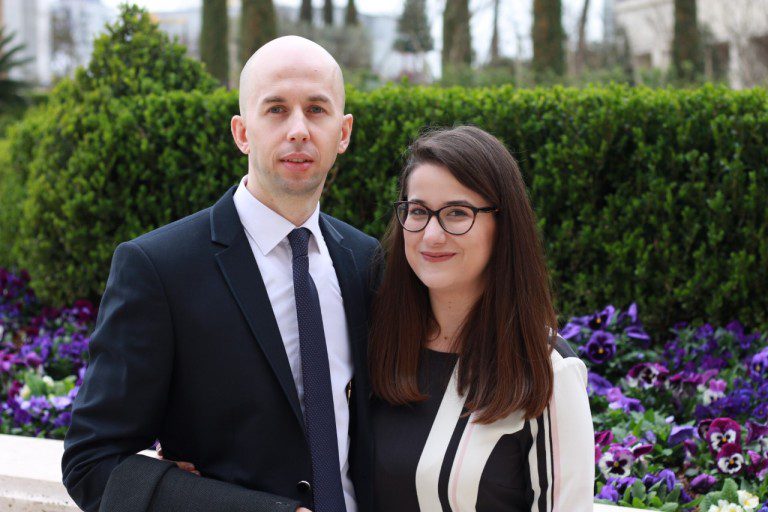 In the crowd of Saints at the visitor center after the first session of the Rome Italy Temple dedication, I saw a group gathering to take a photo in front of the art glass. After jumping in to take the picture for them, I got talking with the owner of the camera—Antonella Konomi. She told me the group had traveled from Albania to witness the dedication and that she was happy to see them after living in Rome for so long. I asked her what had brought her to Rome, and her response was breathtaking:

“We came here 9 months ago because my daughter was diagnosed with leukemia.”

When Antonella and her husband travelled from Albania to a hospital in Turkey and found out their 1-year-old daughter had cancer, they felt hopeless. Not only was the news devastating, but they knew they did not have the money to afford the medical care their baby girl needed. “They were the most difficult days of our lives,” she said.

During the three days they were in Turkey, the little family prayed and fasted to know what to do, and the answer came immediately. They had not told anyone about their news, but the inspiration came clearly to Antonella’s mind that she needed to call her aunt living in Italy. Her aunt, saddened by the baby’s sickness, told her to come to Rome. “Here they can cure her and you will not have a financial burden,” she said.

So, Antonella’s family packed up all of their possessions and left their home for a land unknown. In the midst of settling into a new country, her baby had her first bone marrow transplant. When the cancer was not cured, the hospital opted for a second transplant, which came back with the same results—no cure. The doctors told Antonella her daughter had a 10% chance to live.

With such a heavy burden in her heart, Antonella told her husband all she wanted to do was to say a prayer in the temple. The Rome Temple at that time was neither dedicated nor open for visitors, and they hadn’t even seen it since moving to Italy. The couple decided to make the journey to the temple grounds, in hopes they could feel the temple’s power even from the outside.

When they arrived at the temple, it stood gloriously and as a beacon of hope for them. The gates to the temple grounds were closed, so the couple found a spot outside the gate, knelt, and offered up an earnest prayer to Heavenly Father on behalf of their precious daughter. As Antonella knelt there with her husband, she realized her constant prayer up to that point had been, “Will my daughter be ok?” and “Will the next bone marrow transplant work?” But in the shadow of the new temple built in Italy, she realized there was no yes or no in God’s plan for them. She decided in that moment that no matter what Heavenly Father’s will was, that she would say yes to it.

Antonella still hopes for a miracle for her daughter. As I talked to her in the visitor center, her face glowed with faith and gratitude for this trial. Though the doctors have told her that her daughter will most likely pass away, she has a wellspring of joy and feels keenly that God is blessing them abundantly.

The financial burdens of medical bills are heavy, but after fervent prayer, Antonella’s husband got a job as the Senior Clothing Clerk at the Rome Temple. She told me that even though she misses Albania, having the temple so close by is something she wouldn’t trade for anything. She knows that no matter what is ahead for their little family, they will have the temple as a refuge of peace to come to and remind them that their family is forever.

I know exactly how this mother feels. We gave our little boy back into the Savior’s Loving arms just months ago after battling leukemia. I believe he is calling many great and noble spirts home, there is a great work to be done. Praying endlessly for this sweet family that they have God’s mercy poured upon them and receive their miracle, after all our God IS a God of miracles, through Christ nothing is impossible. If she is called home, may angels lift up her family and comfort them, and may their separation be short, and their reunion grand and glorious. God’s got this, and so do you mama! Stay strong.