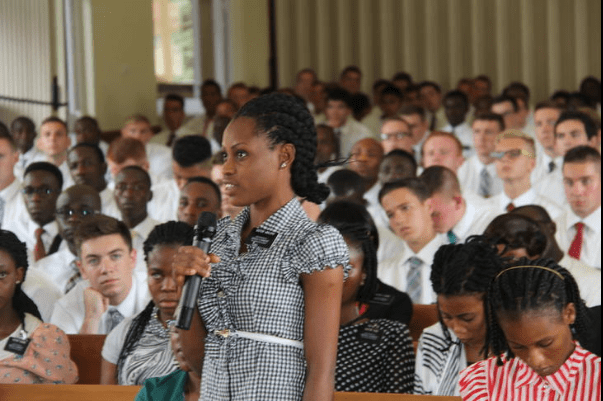 Editor’s Note: Elder Gary E. Stevenson of the Quorum of the Twelve Apostles recently visited the nation of Sierra Leone along with other general authorities. The visit was historic and is a great opportunity to look back at the past miracles for LDS church members in that country.

Two years after the first convert baptisms in Sierra Leone in June 1988, new converts began meeting in their homes. In May 1989 Elder Richard G. Scott became the first member of the Quorum of the Twelve Apostles to visit the country; he met with Church members and dedicated the land for the preaching of the gospel.

Soon, however, Church President Ezra Taft Benson asked members to abandon their new rented meetinghouses and gather in their homes to worship. The news was very discouraging for the local Latter-day Saint leaders and members, who felt that the rented buildings were an important milestone for the Church in Sierra Leone. But they were obedient.

In the midst of war, churches were frequently targeted by rebels; thousands lost their lives while worshipping God. But Latter-day Saints in the country were safe from harm, obediently worshipping in their homes.

Because of this faith, the Church in the country continued to grow until Elder Jeffrey R. Holland of the Quorum of the Twelve Apostles created, in 2012, the first stake in the nation — the 3,000th in the Church.

But trials were not over for Latter-day Saints in the country. After years of civil unrest, the country was hit by the Ebola virus epidemic, which moved into Sierra Leone in 2014. Due to Ebola, another apostle did not visit Sierra Leone again until Elder Stevenson’s recent visit; Bishop Davies’ trip marked the first time a member of the Presiding Bishopric has ever visited Sierra Leone.

He said the members in Sierra Leone are a “light growing out of a darkened nation because of Ebola and war.”