How Did Emma Smith Help Bring Forth the Book of Mormon? | Meridian Magazine 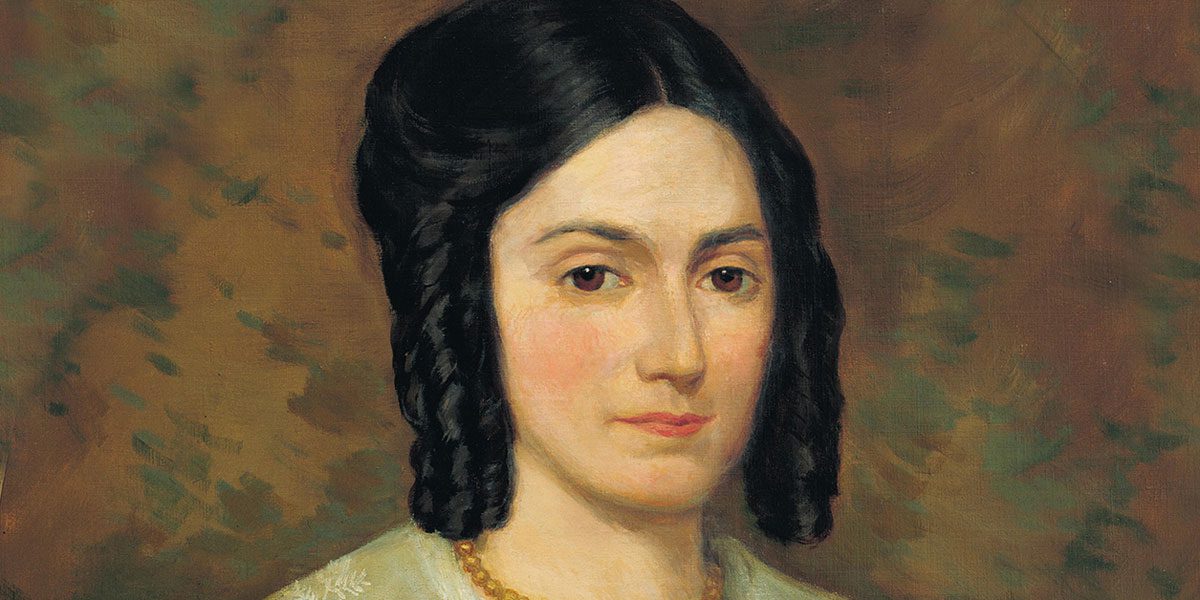 How Did Emma Smith Help Bring Forth the Book of Mormon?

“And it shall come to pass that the Lord God shall bring forth unto you the words of a book, and they shall be the words of them which have slumbered.”
2 Nephi 27:6

According to religion professors Amy Easton-Flake and Rachel Cope, “Emma Smith was arguably more intimately involved in the coming forth of the Book of Mormon than any person besides Joseph.”[1] She helped Joseph Smith retrieve the plates, acted as his scribe, and even felt and hefted the plates while they were covered with a cloth. In these various capacities, she was both an active participant and an intimate witness of the miraculous events as they unfolded. In more ways than some may realize, Emma stood side by side with her husband in bringing forth the “words of them which have slumbered” (2 Nephi 27:6).

Emma’s participation in retrieving the plates was apparently both necessary and appointed by revelation. According to Joseph Knight, Sr., the angel Moroni told Joseph Smith that he would only be able to retrieve the plates if he brought the “right person.”[2] Through revelation, Joseph discerned that this person was Emma.[3] On the appointed day,[4] Emma accompanied him to the base of the hill where the plates were buried, after which Joseph went on alone to retrieve them. After Emma waited alone for several hours, Joseph returned with the plates “wrapped in his coat,” which he then hid in a “hollowed out birch log.”[5]

Thus, while Emma didn’t actually view the plates directly, she was, according to sources, divinely appointed to participate in, and perhaps witness, their retrieval. She watched Joseph trek up the hill emptyhanded and then return with a tangible, though covered, object.[6] As on other important revelatory occasions, Joseph was not alone during this key event of the Restoration.[7]

Emma, having been a “rural school teacher of considerable native talents,”[8] was also Joseph Smith’s first scribe and may have transcribed more of the Book of Mormon than anyone else except for Oliver Cowdery.[9] It is from Emma that we learn most about the circumstances that make the production of the Book of Mormon such a miracle. In her own words, Emma explained that “when acting as scribe, [Joseph] would dictate to me hour after hour; and when returning after meals, or after interruptions, he would at once begin where he had left off, without either seeing the manuscript or having any portion of it read to him. This was a usual thing for him to do.”[10]

Emma remembered that she was “often sitting at the table close by him, he sitting with his face buried in his hat, with the stone in it, and dictating hour after hour with nothing between us.” With this immediate and consistent knowledge of the translation process, she insisted that Joseph “had neither manuscript nor book to read from” and that “if he had had anything of the kind he could not have concealed it from me.”[11] Emma’s participation as a scribe was crucial during the early stages of the translation, and her descriptions offer a unique window into how this miracle unfolded day by day.[12]

Emma’s value as a witness is enhanced because of her physical interaction with the tangible plates.[13] She reported to her son that while cleaning the home, “she would lift and move [the covered plates] when she swept and dusted the room and furniture.”[14] She further explained, “I once felt of the plates, as they thus lay on the table, tracing their outline and shape. They seemed to be pliable like thick paper, and would rustle with a metallic sound when the edges were moved by the thumb, as one does sometimes thumb the edges of a book.”[15] Emma was so confident in the plates’ reality that she never attempted to “uncover them to look at them,” even though she had plenty of opportunity to do so.[16]

Emma’s participation in these miraculous undertakings did not come without great sacrifice. First of all, she chose to marry Joseph Smith even though her father, Isaac Hale, “bitterly opposed their courtship.”[17] And then, in the first year of their marriage, she helped Joseph obtain the Book of Mormon.[18] From this time forward, numerous attempts were made to steal the gold plates,[19] and persecution and danger continually swirled around their lives.[20] Yet through it all, Emma remained constant and true to her husband and the sacred relic that he was charged to protect and translate.

When Emma wasn’t acting as a scribe, she was often doing the domestic chores needed for the survival and comfort of those actively involved in the translation. Easton-Flake and Cope noted, “Maintaining a home was a full-time occupation in early nineteenth-century America, and Emma, without any hired help, fulfilled this necessary role for Joseph and herself, as well as at times for Martin Harris and Oliver Cowdery.”[21]

It is also apparent that Emma was deeply concerned for the success of the translation project. The loss of the 116 pages[22] occurred during a time when Emma was severely sick and had just lost a baby in childbirth.[23] Yet even in her sorrow and ill health, Emma told Joseph, “I feel so uneasy … that I cannot rest and shall not be at ease until I know something about what Mr. Harris is doing with [the borrowed manuscript].”[24]

These details help explain why the Lord chose Emma Smith as an “elect lady” to serve alongside her husband (Doctrine and Covenants 25:3). Her service as a scribe was essential. Her witness as an intimate observer and participant of the coming forth of the Book of Mormon is convincing. And her faithfulness to the prophet Joseph Smith and to the truthfulness of the Book of Mormon is inspiring. In awe at her miraculous experiences, Emma herself remarked, “And, though I was an active participant in the scenes that transpired, and was present during the translation of the plates, and had cognizance of things as they transpired, it is marvelous to me, ‘a marvel and a wonder,’ as much so as to any one else.”[25]

[3] Knight reported that Moroni initially revealed to Joseph Smith that his older brother Alvin was chosen to accompany him to retrieve the plates. However, because Alvin unexpectedly passed away, Joseph sought further clarification about the matter during his next interview with Moroni. According to Knight, “Joseph says, ‘who is the right Person?’ The answer [from Moroni] was you will know. Then he looked in his glass and found it was Emma Hale, Daughter of old Mr Hail of Pensylvany, a girl that he had seen Before, for he had Bin Down there Before with me.” Jesse, “Joseph Knight’s Recollection ,” 2 (original spelling retained). Knight’s story is supported by a late recollection given by Katherine Smith Salisbury, Joseph Smith’s sister. She remembered that when Joseph asked who should accompany him to the hill, Moroni explained, “You will know her when you see her.” Kyle R. Walker, “Katharine Smith Salisbury’s Recollections of Joseph’s Meetings with Moroni,” BYU Studies Quarterly 41, no. 3 (2002): 14. For information regarding Willard Chase’s claim that Samuel Lawrence was supposed to be the one to accompany Joseph to the hill, see Michael Hubbard MacKay and Gerrit J. Dirkmaat, From Darkness unto Light: Joseph Smith’s Translation and Publication of the Book of Mormon (Salt Lake City and Provo, UT: Deseret Book and Religious Studies Center, Brigham Young University, 2015), 7–9.

[4] See Richard Lyman Bushman, Joseph Smith: Rough Stone Rolling (New York, NY: Knopf, 2005), 59: “The angel had commanded Joseph to come to the hill on September 22. To be precise in his compliance and still to throw off meddlers who knew of the date, Joseph chose to go to Cumorah in the dead of night, almost the minute September 22 arrived.”

[5] See Easton-Flake and Cope, “A Multiplicity of Witnesses,” 143–144. According to Martin Harris, Joseph hid the plates in “an old black oak tree top which was hollow.” John W. Welch, “The Miraculous Timing of the Translation of the Book of Mormon,” in Opening the Heavens: Accounts of Divine Manifestations, 1820–1844, ed. John W. Welch, 2nd edition (Salt Lake City and Provo, UT: Deseret Book and BYU Press, 2017), 87. Joseph didn’t actually take the plates home at this time because he didn’t have a proper “covering or a safe place to store them.” MacKay and Dirkmaat, From Darkness unto Light, 6.

[6] Emma also accompanied Joseph when he returned to Palmyra to retrieve the plates from where he had hidden them. See Lucy Mack Smith, History, 1844–1845, Page 1, bk. 5, online at josephsmithpapers.org.

[7] For an overview of these revelatory events, the witnesses who participated, and the documents which help verify their reality, see Welch, “The Miraculous Timing of the Translation,” vii–xii.

[13] Emma was just one of many who had such encounters with the plates and the other artifacts. For broader treatments of this subject, see Kirk B. Henrichsen, compiler, “How Witnesses Described the ‘Gold Plates’,” Journal of Book of Mormon Studies 10, no. 1 (2001): 16–21, 78; Anthony Sweat, “Hefted and Handled: Tangible Interactions with Book of Mormon Objects,” in The Coming Forth of the Book of Mormon, 43–59; Neal Rappleye, “‘Idle and Slothful Strange Stories’: Book of Mormon Origins and the Historical Record,” Interpreter: A Journal of Mormon Scripture 20 (2016): 21–37; Daniel C. Peterson, “Tangible Restoration: The Witnesses and What They Experienced,” 2006 FairMormon Conference presentation, 1–33, online at fairmormon.org.