How Can We Be Delivered through the Lord’s Tender Mercies? | Meridian Magazine 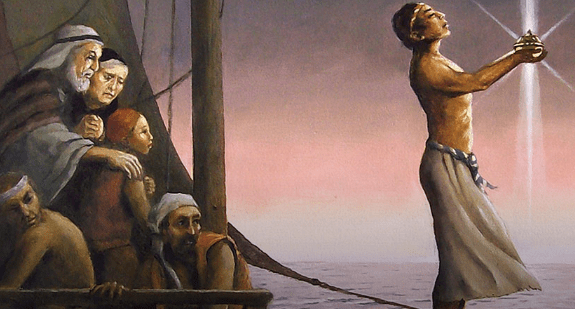 How Can We Be Delivered through the Lord’s Tender Mercies?

“But behold, I, Nephi, will show unto you that the tender mercies of the Lord are over all those whom he hath chosen, because of their faith, to make them mighty even unto the power of deliverance.”

In the first chapter of his record, Nephi said he would show unto his readers that the “tender mercies of the Lord are over all those whom he hath chosen, because of their faith, to make them mighty even unto the power of deliverance” (1 Nephi 1:20). This passage, which has been described as Nephi’s “thesis statement,”1 can help us identify a key theme in Nephi’s writings, especially in the book of 1 Nephi.

In the Old Testament, the phrase “tender mercies” is used repeatedly and almost exclusively in the Psalms.2 In these Bible passages, tender mercies are associated with God’s blessings, loving-kindness, and intimate concern for His children. In addition, Elder David A. Bednar has viewed tender mercies as “the very personal and individualized blessings, strength, protection, assurances, guidance, loving-kindnesses, consolation, support, and spiritual gifts which we receive from and because of and through the Lord Jesus Christ.”3

Nephi, however, clarified that the Lord’s tender mercies are specifically available for those “whom he hath chosen, because of their faith” (1 Nephi 1:20; emphasis added). We know this point was important to Nephi because he emphasized it over and over again in the stories he told about his family’s journey. For instance, when Lehi’s sons were commanded to get the plates of brass, Lehi declared to Nephi, “Therefore go, my son, and thou shalt be favored of the Lord, because thou hast not murmured” (1 Nephi 3:6; emphasis added).

In what way was Nephi favored over his brothers? In this story, it was Nephi who courageously left his brothers and went alone into the city to face Laban, much like David stood alone against Goliath.4 Nephi was miraculously directed “by the Spirit, not knowing beforehand the things which [he] should do” (1 Nephi 4:6). And then Laban, who had fallen to the earth in a drunken stupor, was “delivered” into Nephi’s hands by the Lord—a point which was repeated twice by the Spirit (1 Nephi 4:11–12).5

Nephi’s stories of deliverance followed this same essential pattern after his family departed from the Valley of Lemuel. It was Nephi who didn’t murmur and took the initiative to make a bow and arrow and save his family from starvation.6 It was Nephi who faithfully fulfilled the Lord’s commandment to build a ship, despite Laman and Lemuel’s ridicule and disbelief.7 And it was Nephi whose faith calmed the storms and reactivated the liahona after his brothers’ rebellion on their ocean voyage. In each case Nephi—and in several instances, his entire family—were miraculously delivered because of his personal righteousness.8

Of course, this situation also caused tension and conflict between Nephi and his oldest brothers. When Laman and Lemuel’s anger wasn’t boiling over, Nephi’s chosen status seemed to keep it at a fairly constant simmer.9 Nephi’s older brothers apparently felt that divine favor was a matter of inheritance. They believed the Jews were a righteous people because they descended from a righteous covenant lineage.10 Likewise, they felt that as the oldest sons, it was their right to rule and lead the family. On one occasion, Nephi countered these attitudes by reminding them of the Israelite conquest of Canaan:

In other words, divine favor, including greater access to God’s tender mercies, is directly contingent upon righteousness. Because all of God’s children have an inborn ability to discern between right and wrong (see Moroni 7:15–16), it means that all are free to choose the right and gain access to the Lord’s tender mercies. For this reason Nephi could appropriately add that “the Lord esteemeth all flesh in one; he that is righteous is favored of God” (1 Nephi 17:35).

Nephi’s thesis wasn’t intended to arrogantly prove how amazing he was or how much better he was than his brothers.11 Instead, it seems his primary goal was to persuade his readers that the tender mercies of the Lord are available to all of God’s children. Being favored of the Lord isn’t based upon race, ethnicity, language, culture, nationality, wealth, or any other arbitrary factor. Instead, the Lord tenderly and lovingly provides additional blessings for those who faithfully and righteously come unto Him. For this reason, Nephi declared, “For the fulness of mine intent is that I may persuade men to come unto the God of Abraham, and the God of Isaac, and the God of Jacob, and be saved” (1 Nephi 6:4).

Nephi’s major theme also provides a warning about attitudes and behaviors that will prevent us from receiving the Lord’s tender mercies. At one point, when Nephi’s brothers were arguing about the meaning of Lehi’s dream, Nephi asked them, “Have ye inquired of the Lord? And they said unto me: We have not; for the Lord maketh no such thing known unto us” (1 Nephi 15:8–9). Nephi’s record diligently strives to help readers overcome this negative attitude of self-exclusion. As Elder David A. Bednar has taught,

Some individuals … erroneously may discount or dismiss in their personal lives the availability of the tender mercies of the Lord, believing that “I certainly am not one who has been or ever will be chosen.” We may falsely think that such blessings and gifts are reserved for other people who appear to be more righteous or who serve in visible Church callings. I testify that the tender mercies of the Lord are available to all of us and that the Redeemer of Israel is eager to bestow such gifts upon us.12

Another concern is that we may not immediately recognize the tender mercies the Lord has bestowed upon us. Laman and Lemuel, for instance, saw their father’s vision about Jerusalem’s destruction as mere “foolish imaginations” (1 Nephi 2:11). As a result, they viewed their journey into the wilderness as an unnecessary retreat from civilization and a rash forfeiture of their family’s wealth. Nephi, however, was spiritually sensitive enough to seek his own revelation from the Lord, which confirmed the truth of his father’s vision (see 1 Nephi 2:16). What seemed like foolishness to his brothers, Nephi correctly recognized as a divine means of deliverance—or in other words, a tender mercy.

By the end of Nephi’s record, it is abundantly clear that God repeatedly and consistently blessed and delivered him because of his faith and obedience. As we liken Nephi’s record unto ourselves, we can trust that the Lord will similarly bless us in our own lives (see 2 Nephi 4:34). This doesn’t mean that our trials and hardships will go away. Nephi’s surely didn’t. What it means is that the Lord will lovingly and tenderly support us, and ultimately deliver us, from all of our trials. If we are faithful and obedient, we, like Nephi, will be able to look back upon our mortal journey and clearly see the power of the Lord’s deliverance in our lives (see 2 Nephi 4:20; 1 Nephi 17:14).13

Henry B. Eyring, “The Power of Deliverance,” BYU Devotional, January 15, 2008, online at speeches.byu.edu.

4.For extensive comparisons between Nephi’s slaying of Laban and David’s slaying of Goliath, see the appendix in Book of Mormon Central, “Why Was the Sword of Laban So Important to Nephite Leaders?(Words of Mormon 1:13),” KnoWhy 411 (February 27, 2018).

5.When Nephi’s brothers bound him with cords in the next wilderness rebellion episode, the theme of faith deliverance is repeated again: “O Lord, according to my faith which is in thee, wilt thou deliver me from the hands of my brethren” (1 Nephi 7:17; emphasis added). For more on deliverance themes in the Book of Mormon, see M. Catherine Thomas, “Types and Shadows of Deliverance in the Book of Mormon” in A Book of Mormon Treasury: Gospel Insights from General Authorities and Religious Educators, (Provo, UT: Religious Studies Center, Brigham Young University, 2003), 280–294.

7.For a treatment of Nephi’s shipbuilding activity as divinely directed act of creation, see Alan Goff, “Boats, Beginnings, and Repetitions,” Journal of Book of Mormon Studies 1, no. 1 (1992): 67–84.

8.Several of these narratives, like the episode with Laban, even use some form of the word “deliver.” For instance, after Lehi’s sons persuaded Ishmael’s family to join them, Nephi’s brothers bound him with cords. In response, Nephi prayed, “O Lord, according to my faith which is in thee, wilt thou deliver me from the hands of my brethren” (1 Nephi 7:17; emphasis added).

9.See Matthew L. Bowen, “‘Their Anger Did Increase Against Me’: Nephi’s Autobiographical Permutation of a Biblical Wordplay on the Name Joseph,” Interpreter: A Journal of Mormon Scripture 23 (2017): 115–136.

11.To be sure, Nephi certainly did intend to prove that he was chosen as a “ruler and a teacher over [his] brethren” just as the Lord had prophesied (1 Nephi 2:22). However, Nephi’s intent was clearly to give glory to God rather than retain it for himself. For the political purposes of Nephi’s record, see Noel B. Reynolds, “Nephi’s Political Testament,” in Rediscovering the Book of Mormon: Insights You May Have Missed Before, ed. John L. Sorenson and Melvin J. Thorne (Salt Lake City and Provo, UT: Deseret Book and FARMS, 1991), 221; Noel B. Reynolds, “The Political Dimension in Nephi’s Small Plates,” BYU Studies Quarterly 27, no. 4 (1987): 15–37.

13.Elder Dieter F. Uchtdorf has taught that “when we step back and take an eternal perspective, when we look at our lives in the frame of the gospel of Jesus Christ, we can begin to see how the various dots in our lives interconnect. We may not be able to see the entire picture just yet, but we’ll see enough to trust that there is a beautiful, grand design. And as we strive to trust God and follow His Son, Jesus Christ, one day we will see the finished product, and we will know that the very hand of God was directing and guiding our steps.” Dieter F. Uchtdorf, “The Adventure of Mortality,” Worldwide Devotional for Young Adults, January 14, 2018, online at lds.org.