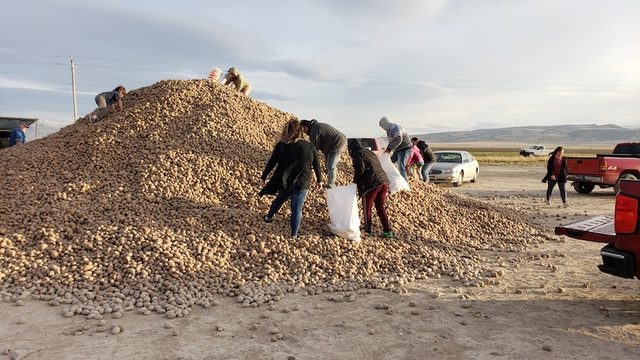 For a year, Ryan Cranney had a $100 bill floating around in the center console of his pick-up truck that he had received for his birthday, and now he knew just what to do with it.

Driving to Walgreens, the Latter-day Saint bishop and Idaho potato farmer sent the money to Susan Githumbi, a single mother of three children in Kenya. Githumbi had been struggling providing for her family since the pandemic impacted her country in April 2020. And while quarantine hadn’t been kind to Cranney’s own business during that time, he wanted to do what he could to help her family.

But how did an Idaho farmer and a single mother in Kenya connect during a time of worldwide need in the first place?

The answer, though somewhat unexpected, was simple.

From Idaho to the Bronx

Ryan Cranney of Oakley, Idaho, has been farming all his life. His company, Cranney Farms, was founded in 1907, and thrives when restaurants purchase potatoes from its harvest in bulk. Food services usually turn those potatoes into French fries—but when restaurants closed their doors during the pandemic, there was a lack of demand for the product.

Since Cranney’s farm needed different equipment to fill grocery store demands, the farmer made a few calls to see if anyone would be interested in purchasing the surplus potatoes. But he didn’t have any luck.

“I could see that there was just no way something like that was going to go,” he says. “[I thought] I might as well just bite the bullet now and get rid of them. I started dumping them on the ground, and I thought about that over the period of several hours after we did, and the thought came to me, ‘Just give them away.’”

He went home that night and talked to his wife about the idea before posting on Facebook that some potatoes were available for those who would “like a few bags.”  This was perhaps a bit of an understatement—Cranney was offering to give away a total of 2 million potatoes—and the response was more than he could have imagined.