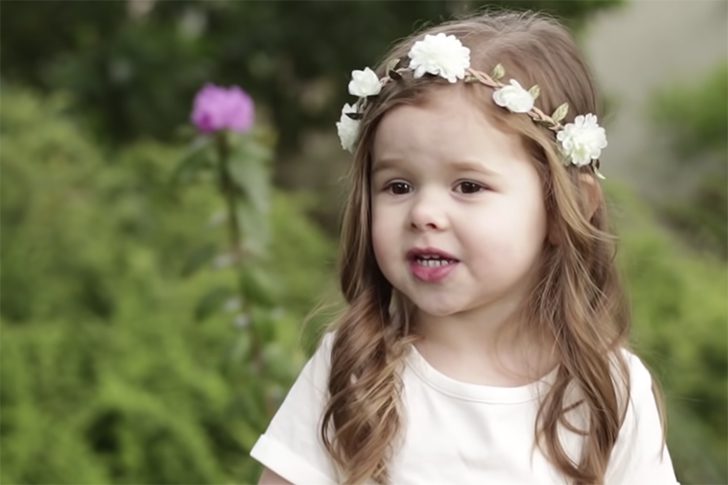 The following description of this precious singer is from her father, Dave, and her mother Ashley Crosby. Dave is a musician and record producer with a YouTube channel and is the creative force behind the music video you will see. In an interview with Parents.com, Dave detailed the story behind Claire’s singing:

“Claire learned to talk at a super young age and we noticed really early on that she could carry a pitch. I remember some time after her first birthday, she was slamming her hands on our little keyboard in the living room. She started hitting the same note over and over, and then she began to sing the exact same note. I was sure at that moment that she was going to be able to sing.

“This led to an obsession with Disney songs. It started with Frozen, but we also introduced her to some of the classics: she absolutely fell in love with The Little Mermaid when we showed it to her. We bought “Part of Your World” for her and she would request it whenever we drove around in the car. Pretty soon, she was singing the entire song word for word everywhere.

“Claire singing “Part of Your World” from Disney’s Little Mermaid went viral in early 2016 with more than 8 million views in about ten weeks. Her father followed that up with Claire singing “Gethsemane” at Easter time. The video [that we have highlighted today] shows her walking through a wooded area and is interspersed with scenes from the Latter-day Saint–produced Bible videos.

“Her video singing “How Far I’ll Go” from Disney’s Moana, garnered over 10 million views. Claire has appeared on television shows such as The Ellen Show and Steve Harvey. In March 2017 on Harvey’s show, he quipped “Eighty-two million people have watched you. That’s more than my entire 32-year career.”

Claire was born in 2012 and continues to sing and produce beautiful songs. We saw this one many years ago when Claire was just 3 years old and were very moved by it—as were millions of others. This video has garnered more than 18 million views. Thanks Claire and Dave and Ashley for moving and lifting us so much.