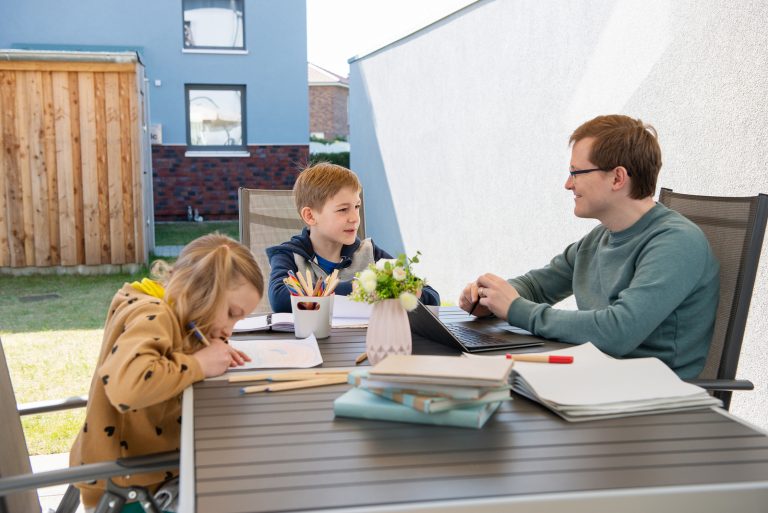 It was my husband’s work schedule that proved to be the last straw. He had just started work as a pilot at a major airline, and, in the airlines, work schedules all depend on a complex bidding process based on seniority. As a new-hire, he was at the bottom of the totem pole, so to speak, so he got the least favorable schedule. It seemed as though he was always leaving for work just as the kids returned from school for the day. He would take off for three days at a time, or more, and was rarely home on the weekends. It took a toll.

This lack of family time led me to seriously consider homeschooling. I had become acquainted with this alternative to the traditional classroom several months earlier after meeting a young couple that taught their children at home. This was in 1989 when homeschoolers were often characterized as a little rebellious and many people questioned the legality of the practice. This family, however, did not seem radical in the least. They simply felt inspired to forge an alternate path for their children’s education. My curiosity was piqued, and I started doing some research.

One of the first books that I read was by homeschool pioneers, David and Micki Colfax. The Colfaxes lived on a ranch in northern California that they built with the help of their four sons. Dissatisfied with the local schools, the family decided to teach their children at home. Their methods were unconventional but effective: three of their four sons went on to study at Harvard. Two earned MDs from Harvard medical school and one has a law degree from Yale. (The outcome of my family’s homeschool adventure includes 4-year degrees for all three of my grown children, including one post-graduate degree. All are gainfully employed. Two are married and raising their own families. One is also homeschooling her four children.)

A lot has changed in the world of homeschooling since the Colfax boys started their Ivy League educations. In 1987 there were approximately 500,000 homeschoolers in the U.S. Universities had to create admission policies and procedures for this new brand of applicant. Today, according to the most recent findings by the U.S. Department of Education’s National Center for Education Statistics (NCES), homeschoolers make up 3.4% of the school-age student population, that’s approximately 1.7 million students. And whereas universities were initially dubious regarding the quality of education and individual capabilities of homeschool graduates, today’s homeschoolers are sought after as they contribute to a diverse student body. In an article with Alpha Omega publishers Dr. Susan Berry, who writes about educational and cultural trends, shares that the “high achievement level of homeschoolers is readily recognized by recruiters from some of the best colleges in the nation…Schools such as Massachusetts Institute of Technology, Harvard, Stanford, and Duke University all actively recruit homeschoolers.”

Unfortunately, Harvard is giving the appearance of rolling up that crimson carpet for homeschoolers. While the university’s website still favorably highlights a Harvard Gazette article about the homeschool experience of three Harvard students, it has chosen to host a conference titled  “Homeschooling Summit: Problems, Politics, and Prospects for Reform”. The invitation-only conference will focus on “problems of educational deprivation and child maltreatment that too often occur under the guise of homeschooling, in a legal environment of minimal or no oversight.”

One of those featured speakers is Harvard Law professor, Elizabeth Bartholet. In a 2019  essay  for the Arizona Law Review, Bartholetcalled homeschooling a “threat” to “children and society.” Bartholet’s chief complaints against homeschooling appear to center on the rights of parents to direct the education of their children and the religious beliefs of many homeschool families. Bartholet calls homeschooling an “unregulated regime” which violates children’s rights to a “meaningful education,” enables abuse, and leaves many unprepared “for participation in employment and other productive activities in the mainstream world.”

Harvard Magazine chose to highlight Professor Bartholet’s views in a recent article where she calls for a “presumptive ban on the practice.” The image that accompanies the article depicts happy, traditionally-schooled children scampering outdoors while a sad, homeschooled child watches on from behind the prison windows of her house. The Bible is prominently featured as a school text. That’s because, according to Bartholet, up to 90% of homeschoolers are conservative Christians – “including Mormons, Jehovah’s Witnesses, and Seventh-day Adventists” who want to isolate their children from “conflicting cultural values.” She claims that homeschool parents “reject mainstream, democratic culture and values,” “oppose science,” and, quoting from Homeschooling: The History and Philosophy of a Controversial Practice by James Dwyer and Shawn Peters, “want to constrain their daughters’ lives to a single

Bartholet is highly critical of courts and legislation that legitimizes homeschooling and calls for a “change in the culture surrounding child rights.” She finds fault with the U.S. Constitution’s structure of “negative rights” – the right of individuals to be free from state coercion and interference which forms the basis for the rights of parents to direct the upbringing and education of their children. Bartholet believes that the U.S. is “out of step” with the rest of the world and would prefer that we implement the United Nations Convention on the Rights of the Child and join European nations in establishing positive law that recognizes autonomy rights for children similar to adults’.

While Bartholet is pushing a narrative of extremist conservative Christians fueling a movement that harbors abuse and cripples homeschooled children’s capacity to function as adults in a democratic society, the facts reveal a very different story. Harvard graduate and homeschool expert, Kerry McDonald, criticized the Harvard Magazine article for its “one-sided portrayal of homeschooling families that mischaracterizes the vast majority of today’s homeschoolers” as well as its “misinformation and incorrect data,” particularly Bartholet’s claims regarding the religious underpinnings of homeschool families and charges that homeschoolers are isolated from the wider community and lacking in civic education and exposure to varying viewpoints. Some of McDonald’s corrections:

About two-thirds of today’s nearly two million US homeschoolers identify as Christian (equal to the US population as a whole), but the homeschooling population is becoming increasingly diverse, both ideologically and demographically…the most significant motivator for parents choosing this education option was “concern about the school environment, such as safety, drugs, and negative peer pressure”…Much of the current growth in homeschooling is being driven by urban, secular parents who are disillusioned with a test-driven, one-size-fits-all mass schooling model and want a more individualized educational environment for their children.

…research on homeschoolers finds that they are tightly connected with their larger community and may have more community involvement and participation in extracurricular and volunteer activities than schooled children due to their more flexible schedules and interaction with a wide assortment of community members.

Bartholet is the director of Harvard Law’s Child Advocacy Program, so I believe her interest in child welfare is sincere, but her sloppy efforts to smear all conservative Christians as regressive cultists reveal a personal prejudice that mars her efforts and invalidates much of her work. If she is worried about children receiving inadequate educations, where is her concern for the 19% of high school graduates who are functionally illiterate? Or the 76% that lack proficiency in civics? Or the fact that a measly 12% graduate knowing basic American history? What of the regular revelations of sexual abuse committed by educators? Or the 20% of students ages 12-18 that experience bullying at school? Do we call for a ban on public schooling because of these deficiencies? Of course not.

I have a psychologist friend who works primarily with children. He regularly reminds parents that they are “the resident experts on their children.” Despite tragic, horrifying exceptions of parental abuse (and they are especially tragic and horrifying because they are the exception), no one has the vested interest in the well-being of a child that a parent has. This is a parental right and duty that we want to preserve. Parents will make educational choices that best reflect the particular needs of their children and families. For my family and the Colfaxes and millions of others, that is homeschooling. For others, it is public, private, and charter schools. Thank goodness we have a constitution that recognizes that it is a protector of unalienable rights and not a creator of rights. And thank goodness we have the freedom to address the distinct educational needs and goals of a diverse people. Let’s keep it that way.

"Despite tragic, horrifying exceptions of parental abuse...." As if the same cannot be said about public schools. Even here in Utah we have too may incidents of sexual exploitation by teachers in the news. What about the myriad of other psychological damage that cannot be measured such as bullying by other students, unqualified & unstable teachers, godless teachers, bizarre educational fads (e.g., New Math, Common Core, the 1619 Project)? I'll take a parent any day! Maybe the real problem is working parents hate the fact that homeschooled kids do way better than their public schooled kids.

I remember my grandmother in the early 1960s lamenting the fact that one of her two sons had gotten a masters in architecture at Harvard, because he had been dumbed-down by the progressives, socialists, and communists in the Harvard faculty. Harvard's culture is not a recent phenomenon.