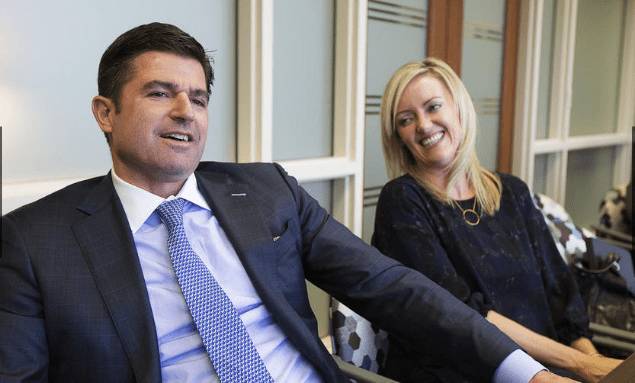 At the end of July, friends of Philadelphia 76ers CEO Scott O’Neil received a text from him that simply said, “I believe.”

The text was his way of informing them of his decision to be baptized a member of The Church of Jesus Christ of Latter-day Saints.

O’Neil, who is not only CEO of the Sixers but also of the New Jersey Devils and the Prudential Center, had been married to his wife, Lisa, a lifelong member of the LDS Church, for nearly 21 years. The two are parents of three daughters, Alexa, Kira and Eliza. He attended church with family on Sundays, held family home evenings each week, led his family in scripture study and paid tithing for years.

So what changed? Why now?

If you ask O’Neil, he will tell you that while his wife, who he calls “a wonderful example in terms of how to live,” had the most influence on him, his choice to be baptized was not the result of one thing in particular, but rather the product of the actions of many people over time.

“I guess I would make it analogous of the story of the rock where you pound the rock and pound the rock, it’s like a thousand times that you can hit it and it’s not that last hit but the thousand ones before it,” O’Neil said, referencing a famous quote by Jacob Riss. “Maybe that’s a bad analogy because things were breaking off rather than coming together, but we’ve been really fortunate. We’ve had tremendous friends, we’ve lived in six or seven different cities. We’ve had incredibly strong home teachers, incredibly strong wards, incredible bishops, we’ve had the good fortune of meeting several general authorities, too, and that’s been a good experience. If there was ever a hand of God in giving us an opportunity to make a decision, it was certainly there.”

Scott and Lisa O’Neil met while working for the New Jersey Nets, he as an administrative assistant and she as an intern. O’Neil had been raised a devout Catholic and attended both Catholic high school and college while Lisa was a Mormon and a student at Brigham Young University on summer break. She had internship opportunities from two other NBA teams, both of which were better than the offer from New Jersey, and O’Neil said there is no reason she should’ve gone with the Nets other than to find her future husband. Before they were married, O’Neil made a commitment that their children would be raised in the LDS Church and that he would be supportive and go with them to church. He was true to his word for more than two decades despite the demands of a successful career that has earned him a place in the Sports Business Journal’s Forty Under 40 Hall of Fame.