From the Nepal Earthquake to the Global Pandemic: The Power of Togetherness | Meridian Magazine 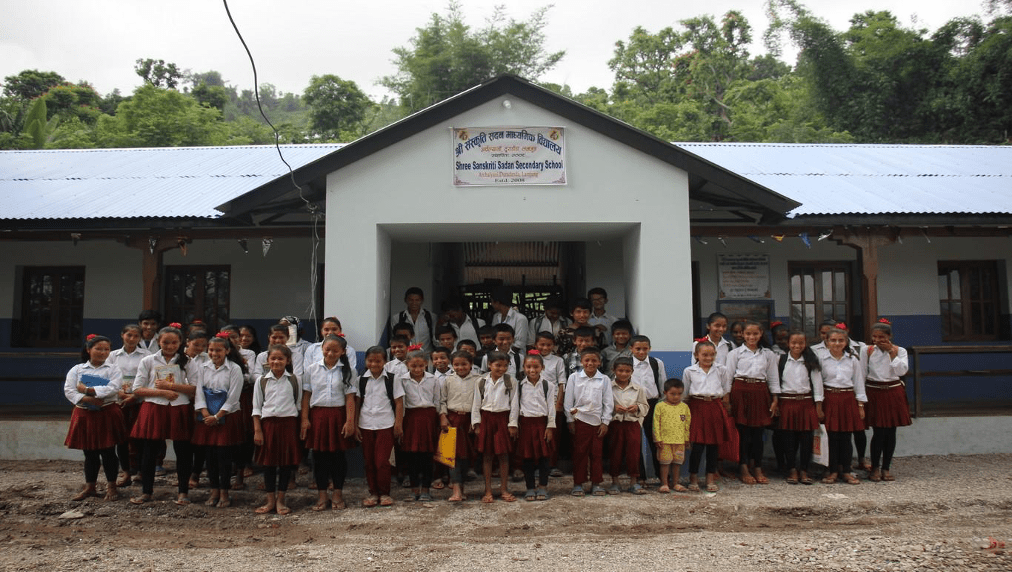 From the Nepal Earthquake to the Global Pandemic: The Power of Togetherness

Young Ausa Stresta was concentrating on a school exam in her hometown of Lubhu, Nepal, when she felt the first of many trembling quakes that would bring her village, along with one third of her entire country, crumbling to the ground. She ran home with one thought racing through her mind, a thought no child should ever have to contemplate: is my family alive? As she ran, the shattered buildings and crying villagers filled her gaze, providing dreadful clues that her family could be among the 9,000 Nepalese who would lose their lives that day.

Seeing the Destruction Together

The entire world watched in awe while in 90 seconds a 7.8 earthquake ripped 100 kilometers east to west, directly through Nepal’s capital city of Kathmandu. Nepal’s high population density, poorly constructed buildings, and remoteness of many communities meant that this earthquake was far more destructive than it would have been in most developed countries.

Those who survived the earthquake, like Ausa, did not escape its horrifying effects. 22,000 individuals were injured. Thousands more were left homeless. Countless aftershocks of prevented villagers from entering the few homes that were still standing. Water contamination and a lack of access to toilets meant that the risk of a cholera outbreak was high. The earthquake struck just before the monsoon season, making the lack of stable structures all that more dire. On top of this, all three of the major roads into the Kathmandu Valley from India, China, and Western Nepal became blocked due to landslides and destroyed bridges. This meant that there was no way to get all necessary supplies to the villages who were suddenly stranded and alone.

The Families Who Suffered Together

Thousands of lives were destroyed in an instant. Still, thousands more were reduced to destitution after losing homes, businesses, and other priceless possessions. However, even as families were facing debilitating hunger and homelessness, one of the most urgent concerns on the minds of many Nepalese parents was the effect the earthquake would have on the children. In villages surrounding the Kathmandu Valley, 90 percent of schools had been destroyed. In a country where 31% of people were already living below the poverty line, a formal education is the difference between a life of impoverishment and hunger and one with choices and opportunities.

Nisha and her family were among those whose homes and schools were severely damaged. Nisha’s mother, a widow at 24, worked two difficult jobs as a sharecropper and a day laborer. She only had work when it was available and could barely support her children’s needs. In Nisha’s own words, she said, “The earthquake on April 25th broke our school and our house. We are now living in a broken house with a makeshift zinc roof.”

Many children like Nisha whose schools were destroyed were unknowingly lured into human trafficking when brokers, known in Nepali as dalals, promised them opportunities to study at schools in the city. Children who still had a place to attend school, even if only in a tent, were less vulnerable to trafficking practices. Luckily, Nisha and her brother were able to attend school when CHOICE Humanitarian, an American-based not-for-profit organization, included children’s education as one of their highest priorities. CHOICE quickly allocated resources to building temporary tent schools for the children whose schools had been destroyed.

CHOICE Humanitarian was among the first responders after the earthquake hit. The organization quickly swung into action, marshaling its human and financial resources in its planning and implementation to help mobilize the affected communities. CHOICE, in coordination with local governments, launched the installation of semi-permanent structures, known as dome houses, to temporarily house the affected villagers. Later, construction of permanent structures–houses, hospitals, and schools–began. The effort continues today with houses and schools still under construction.

CHOICE Humanitarian entered Nepal in 2000 by working with local leaders to determine the villages’ most consequential needs. CHOICE has since transitioned from an organization focused on small areas to a scaled model working with entire regions. The Nepal staff trains local leaders and provides the tools villagers need to create resilient communities.  CHOICE and the organizational training that took place before the earthquake allowed community leaders to springboard right into action.

CHOICE’s mission is focused on mobilizing and organizing communities to create their own path out of poverty. They currently work in eight different countries around the world. CHOICE provides resources and training to local leaders and families who possess the desire to improve their lives but lack the opportunities and means to do so. Although CHOICE does not focus on relief, it temporarily pivoted its focus in Nepal from long term development to the much-needed immediate support.

Creating an Earthquake Resilient Region Together

Consistent with the goal of developing local leadership, as soon as it was possible after the earthquake, CHOICE started making long term plans to prepare Nepal for future natural disasters.

Bishnu Adhikari, known for being featured in the Meet the Mormons documentary, was working as the CHOICE Nepal director at the time. Like Nisha, Adhikari is one of the lucky ones. He received a scholarship and became a civil engineer.  As a young man who grew up very poor, he understands the importance of education. Adhikari’s CHOICE Nepal team, along with generous support from donors like the DoTERRA Healing Hands Foundation, created plans for earthquake-resilient schools to be built and used it as an opportunity to train villagers in the construction process.

CHOICE always begins with the exit in mind. They train local leaders to organize and manage their own development so that the project results are sustainable, and the villages become self-reliant.

Coming Together Again to Respond to the Pandemic

Five years since the earthquake, Nepal continues to recover, but recently has experienced setbacks due to the global pandemic. The country is struggling to prevent the spread of the virus and treat its citizens. Due to resource constraints, the strategies created to contain the disease have shown little success. Instead, the infected cases are rising exponentially.

When the pandemic started, CHOICE wasted no time and once again were on the front lines of responding to critical needs.  They worked with the local government to convert the recently completed Rural Municipality Hospital to a quarantine facility for COVID-19 patients before it had even been inaugurated. This preventative measure helped to control the spread of the disease in rural areas. The hospital continues to be a significant resource in the fight against the virus.

The relationships built and the lessons learned through working with Nepal for many years play an important role in CHOICE’S current ability to provide immediate pandemic relief. However, Nepal is only one of eight countries CHOICE has been working in for the past 38 years, all of which are now receiving aid specific to this unprecedented pandemic. These countries include Ecuador, Bolivia, Guatemala, Peru, Mexico, Kenya and the Navajo Nation. CHOICE is focusing on three core pandemic response areas, food security, healthcare, and gender equity.

In Ecuador, Maria’s village lies miles away from the nearest large city. Food is no longer being transported to her village and she can’t sell goods at the local market for fear of contracting the virus. With no food and no income, starvation is a very real possibility for herself and her family. CHOICE is working to provide communities with sustainable food resources to prevent malnutrition and starvation. For individuals like Maria, the CHOICE Ecuador team created plans to provide long term solutions such as seeds for food production and animals for animal husbandry.

In many underdeveloped countries, healthcare can be inadequate and even nonexistent. Sofia who lives in Guatemala for example, has only one doctor in her village which is miles away from any healthcare facilities. With limited access to clean running water, even the simplest precautions like consistently washing her hands is not an option. In communities like Sofia’s, CHOICE has provided infectious disease education and medical support for Covid-19 testing including providing viral transport media, masks as well as other personal protective equipment.

When a natural disaster hits, women are affected more than other groups. Women are tasked with caring for the children, collecting wood and contaminated water, and ensuring their families are safe and fed. Providing women with the support and training they need is vital. This is why CHOICE has focused on providing resources and educational opportunities specific to women during this pandemic.

Manju works as a daily wage laborer. With tears in her eyes, she said, “After the lockdown, we were without work and could not make any money. We were not able to pay our rent and so our landlord kicked us out. We are now living in this shack in someone’s rice field. At a time when we were finding it very hard to feed our family, CHOICE Nepal has come to our aid. Thank you very much. It would have been very hard to make it to another day without your help.”

After 38 years in the field, CHOICE continues to be inspired by the numerous individuals who have lifted themselves out of difficult circumstances. Even during crises such as the earthquake and the pandemic, the services CHOICE provides will always be focused on long term solutions so families can continue to be self-reliant for years to come. For those living in poverty, their lives are a series of crises: natural disasters, war, drought, pandemics and downturns in the economy to name a few. CHOICE in-country teams are helping communities build resilience to withstand these constant shocks and find a path out of poverty.

Remember Ausa, running to find her family? Despite seeing their village and their house reduced to rubble, as if by a miracle, they survived. She and her family lived under a tarp for a month following the earthquake. They, assisted by CHOICE Humanitarian workers, toiled for days to clear the wreckage of their village. Though she lost her home, presumably many of her friends, and all stability in life, in a video interview with CHOICE she genuinely smiled as she thanked those who assisted her. Her joy and humble gratitude could be strongly felt. For me, it has been inspiring see the strength of those who have graciously endured the earthquake and the pandemic. We learn from their fight to live and their willingness to work. Ausa, Nisha, Bishnu Adhikari, Maria, Sofia, and Manju all motivate others to sacrifice for those who have less and find happiness in seemingly daunting circumstances.