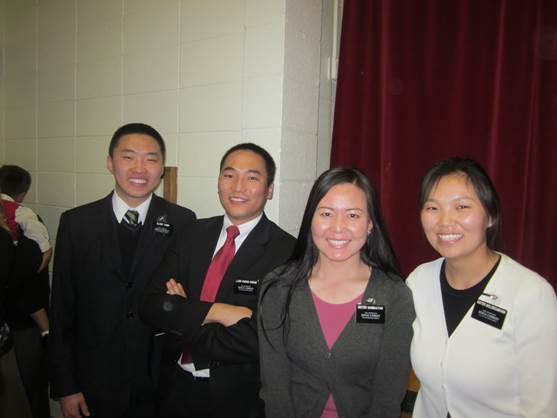 Photo above: Elders Tamir and Key and Sister Ganbaatar and Bolorsaikhan

I was born in Mongolia in 1991, the same year that my country of Mongolia was finally released from the control of communism.  The new found freedom we enjoyed included a release form the dominating influence of Russia and an introduction to many new things such as freedom of religion and Christianity.

In 1994, the Church was officially registered with the Mongolian government. One year later, the first mission—the Mongolia Ulaanbaatar Mission—officially opened, and a year after that, in 1996, the first four sister missionaries arrived in Mongolia.  In 2001, the Book of Mormon was translated into Mongolian and distributed among the Saints. In 2009, the first Mongolian stake was organized. In 2010, the ten thousandth member was baptized. For a country that is 96 percent Tibetan Buddhist, such milestones are momentous.  But at the beginning, joining the church was not based on the wonderful large wards and beautiful chapels.

Our family was first introduced to the Church in 1999, just 3 years after LDS missionaries originally started teaching in our country, and a decade before the first stake was organized.  By any standard, our family members were some of the earliest pioneer members to join in Mongolia.   My mother’s close friend was converted first and baptized by the missionaries, and she then referred my family to the missionaries.  I vividly recall taking the lessons from them, even though I was only about 8 years old.

I remember the missionaries had only two or three verses from the Book of Mormon translated into Mongolian (the Book of Mormon was translated into our language two years later).  I remember very clearly the missionaries teaching us about the “First Vision” and then holding up a picture of Joseph Smith seeing God the Father and His Son, Jesus Christ.  As I looked at the painting depicting this sacred event, and listened carefully to Joseph Smith’s testimony of what occurred in the Sacred Grove, an unbelievable power from the Holy Ghost entered our small room and filled my heart with gladness.

We were soon baptized and then later sealed in the temple for time and all eternity as a family in the Hong Kong Temple.  My father has served in our Bishopric and in the Stake Presidency.  My sister served a mission in Mongolia and I served a mission in America.  What remarkable and great blessings our family has received by entering into the waters of baptism.  May God bless all of us as we following the promptings of the Spirit.