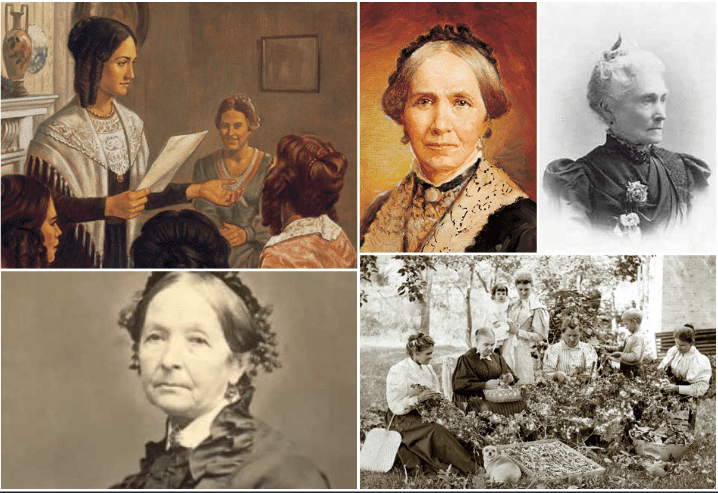 The minute book of The Female Relief Society of Nauvoo was so important to Eliza R. Snow, that she carried it on the trek West herself and then used it for the decades to follow as the foundation for the growth and expansion of organization in the West.

It was precious, in part, because these notes expressed women’s full integration into “the privileges & blessings & gifts of the priesthood” as Joseph Smith had told the society. They were a charitable organization, yes, and would develop purity in this way.

But more, the purposes of the society were inextricably linked as a preparatory school for the temple ordinances in Nauvoo. Joseph Smith attended the meetings nine times and spoke in six of them—the only contemporaneous record we have of Joseph Smith specifically addressing the women of the Church as a group.

He told them that he intended “to make of this Society a kingdom of priests an [as] in Enoch’s day—as in Paul’s day.” These intentions would be realized in the temple rituals. As Eliza R. Snow said, “It is the duty of each one of us to be holy women.” Their understanding was to be heavenly.

Also affirming the purpose of Relief Society, Bishop Newel K. Whitney, explained that “without the female all things cannot be restor’d to the earth It takes all to restore the priesthood.”

In the pages of the Nauvoo Relief Society Minute Book, we see women who came to understand who they were and how to define and empower themselves in the kingdom. For seven decades the Nauvoo Relief Society Minute Book, which was uniquely a women’s record, was in the hands of women. Excerpts were read and celebrated at women’s meetings. They were published and quoted repeatedly “to explain and legitimize their ministry.” Snow described the volume as a “Treasure beyond Price.”

For the first time, the entire minutes of the Nauvoo Relief Society, along with 77 other records, many of which are rare and largely unknown, have been published in The First Fifty Years of Relief Society: Key Documents in the Latter-day Women’s History.

The book, which has actually been 15 years in the making, brings us the voices of many women in an unfiltered way, telling their experiences. In the pages we meet leading women like Sarah Melissa Granger Kimball and Zina D.H. Young, but also we hear the voices of others like Emma Anderson Liljenquist, who delivered 1,000 babies in Hyrum, Utah.

Though it is a hefty book weighing in at 800 pages, the individual documents are readable, sometimes insightful, often inspiring. For the four editors, Jill Mulvay Derr, Carol Cornwall Madsen, Kate Holbrook and Matthew J. Grow, deciding which of the many documents to include was the challenge. “I never met a document I didn’t like,” said Derr. She added, “It was meant to be more than just an academic work. We were under some pressure to make it readable and manageable.”

This is a landmark publication. For the first time the Church Historian’s Press imprint appears on a volume outside of the Joseph Smith Papers project. It is a further mark of the Church’s complete transparency in sharing its records and its past.

Grow said that the printing of this book means that academic and popular writers will have to at least grapple with the actual words of the 19th century women who have their voices here. They cannot just be dismissed as the benighted or oppressed or just sweet things in sunbonnets.

The documents show women’s involvement in healthcare, the training of doctors and midwives, participation in the larger women’s rights movement. They had a budding economic life and built their own Relief Society halls where they had dry goods stores on the main level to help finance the Church’s projects.

Before each document an introductory explanation is given to help the reader put it into context and understand its significance.

For example, the book includes Eliza R. Snow’s poem of October 1845, which she called “My Father in Heaven” and which we sing as “O My Father.”

The editors give this insight, “Eliza R. Snow, who served as the secretary of the Female Relief Society of Nauvoo from 1842 to 1844 and married Joseph Smith on June 29, 1842 completed the…poem..a little after the death of her husband and within a short time after the death of her father, Oliver Snow.” Since her marriage, Snow had lived in 5 residences. “Her marriage was a secret, and wherever she lived in Nauvoo, Snow was always a guest. She composed the poem while living in the Markham’s attic, where she moved on April 14, 1844, in a room where the ceiling was ‘so low that she could almost reach the rafters as she lay in bed.”

It should not be a surprise, then, that “rootedness is one of the major themes, as it speaks of place, habitation, residing and dwelling.”

We also learn that Eliza had been asked whether she had learned of Mother in Heaven from revelation from God. “She responded, “No,” and explained that her inspiration had come from Joseph Smith’s teachings.”

The editor’s wrote, “The extant writings and discourses of Joseph Smith include no mention of a Mother in Heaven, but later accounts indicate that he taught this doctrine to Snow and others in private.”

What may initially surprise those unfamiliar with this history is that women in Nauvoo had to apply to join Relief Society and be approved by its members. The ideal, according to the editors, was that “they were building a ‘pure people,’ ‘a kingdom of priests,’ and a ‘holy nation’ worthy to build a literal city of Zion where Jesus Christ would rule after his Second Coming. “ “Joseph Smith taught that unity, charity, and purity were all elements in the Saints’ mandate to build Zion.”

Joseph Smith advised that “the Society go into a close examination of every candidate,” similar to a man when he enters a priesthood quorum. Like priesthood quorums, the women were set apart and presidencies contained three members.

Certainly their imperative was ‘searching after objects of charity, and…administering to their wants’ a pressing need in a Nauvoo where new refugees from Europe were constantly arriving. Women visited families to discover wants and believed as one woman said, “Our salvation depended on our liberality to the poor.”

Part of their meetings were practical like this exchange:

“Mrs. [Mercy] Thompson made mention of a lone widow with one child late from England, without friends, in want of a home.

“Mrs. [Sarah] Brown proposed to take her in.”

Certainly the thrust of the Relief Society was to prepare women for the temple ordinances and promises—from which they would see themselves fitting into the ecclesiastical structure of the Church in a whole new way. This was underlined when Emma Smith, the first president of the Relief Society also became the first female officiator of temple rites.

Her successors Eliza R. Snow, Zina D.H. Young, and Bathsheba W. Smith all assumed both roles. For instance, “Snow was known by her contemporaries both as ‘a Priestess in the House of the Lord’ and as ‘President of all the Relief Societies in the Church.”

The editors note, “From the time Joseph Smith extended church offices and temple privileges to women, questions emerged regarding the possibilities and limitations of their authority. Were women authorized to heal the sick? Were women intruding on the bishop’s role as they assisted the poor?”

These were questions that had to be grappled with and understood with different answers emerging in different periods.

Healings and Gifts of the Spirit

In Joseph Smith’s April 28, 1842 sermon to the sisters on spiritual gifts, he “offered instructions respecting the propriety of females administering to the sick by the laying on of hands—said it was according to revelation.” He said, “If the sisters should have faith to heal the sick, let all hold their tongues.”

Latter-day Saints turned to the Bible to claim that healing was a sign that followed believers and was a gift of the Spirit. The prophet noted that these signs “should follow all that believe whether male or female.”

The editors note, “In addition to these blessings of health and comfort, Latter-day Saints women ritually washed and anointed one another before childbirth at a time of high maternal and infant mortality and sparse, questionable medical treatment. The practice emerged from women’s experiences as midwives, as faith healers, and as officiators in temple ceremonies.

Eliza R. Snow stated, “Women can administer in the name of Jesus but not by virtue of the Priesthood the promise which Jesus made was to all not to either sex.”

Derr said that those who see the story of triumph of the Church as a never-ending march of progress in total harmony will find that this book complicates that idea. It is not a simple narrative. We need to understand how the gospel is lived out in real lives.

One of these complications is the divide between Emma Smith and Brigham Young. She as the president of the Relief Society, known as the Elect Lady, was using her position to rally against plural marriage. As the church’s first lady and with her authoritative role in the women’s temple ordinances, she had great power.

Brigham Young believed that her efforts “contributed to the furor against Joseph and Hyrum Smith and helped lead to their deaths.”

Nine months after their deaths, in March of 1845, President Young said, “What are relief societies for? To relieve us of our best men. They relieved us of Joseph and Hyrum.”

With these suspicions and the pressures of the move West upon him, Brigham Young disbanded the Relief Society in 1845, but was avid in his support for it to be reconstituted in Utah.

So this is a book not be missed with lively voices speaking from the dust. Acclaimed writer Wallace Stegner once wrote of the early people of the LDS faith, “That I do not accept the faith that possessed them does not mean I doubt their frequent devotion and heroism in its service. Especially their women. Their women were incredible.”

The voices shared in this book are indeed incredible—and to know our LDS history, it is critical to know our women’s voices which did so much to shape it. Some parts of this book are already available for free at churchhistorianspress.org. All of it will be available in a year on the website.

While I realize that Eliza R Snow made an impact on the church in its beginnings, it really bothers me that she secretly married her friend Emma Smith's husband. Emma hated plural marriage and had trusted Eliza. You may say that Eliza and Joseph were following God's command but it just seems so cruel to me that a woman would do that to another women she considered to be a good friend. What about loyalty? Seems a bit cruel to me.