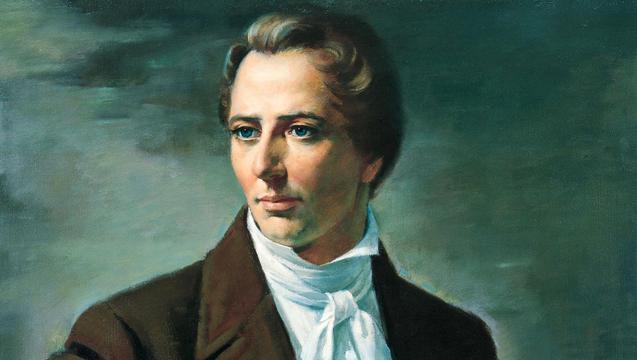 Editor’s Note: The following was originally published on Segullah. It is republished here with permission. To read the original post, click here.

A few Sundays ago, I sat at the back of the chapel, twisting in my seat, wondering if I should bear my testimony. For several months I’d felt a stirring to testify of Joseph Smith. But every month, as testimony meeting rolled around, I had an excuse. I wasn’t feeling well, my voice sounded raspy, surely what others had to say was more important.

Unable, however, to deny the prompting any longer, I stood and walked to the front of the chapel. I expressed my love for our wonderful ward then I testified of Joseph. Just Joseph.

I served a full-time mission in Illinois and Iowa, with special assignment to the Nauvoo Visitors’ Center. Every time I stood next to the bust of Joseph and told the story of the First Vision, my heart would kindle with knowing. I would repeat his words from memory, and something would pass between me and the hearer. God’s spirit would sweep over us, our eyes would meet, and I could not look away.

I saw a pillar of light, exactly over my head, above the brightness of the sun, which descended gradually until it fell upon me… When the light rested upon me I saw two personages, whose brightness and glory defy all description, standing above me in the air. One of them spake unto me, calling me by name and said, pointing to the other—This is My Beloved Son. Hear Him!

Joseph’s words could quiet the room.

Many nights, after the Visitors’ Center closed, our group of six sisters would ride bikes back to our little house on Main, change our clothes, and take to the pavement. We would walk the streets of Nauvoo. Past the prairie grass thick with fireflies, down Kimball, then all the way to the end of Parley, to feel the cool breath of the river. Eventually we would make our way up Water Street and back to Main, where we would pause at the Mansion House, lean against the white picket fence, and talk of Joseph.

We were encouraged, not just allowed, to read anything in the Lands and Records Office. So we would spend lunch breaks there, asking for journals or personal histories of individuals we found interesting. Real people we wanted to know about. Then we would share what we learned on our walks. Every personal history spoke of Joseph, how he served, what he taught, how he loved. And night after night, our testimonies of Joseph expanded. So much that I began to feel a kinship with him, a closeness almost like family. I knew things I hadn’t known before about his life, his character, the challenges he faced.

I knew how Emma felt about plural marriage, how difficult it was for her. I knew about each baby they lost, how John Murdock asked if they would adopt his twins, only to lose one of them from exposure the night Joseph was dragged from his house and tarred and feathered. I learned the stories behind a number of Joseph’s trusted companions who turned against him, so viciously they would plot to take his life.

One evening, while walking down Parley Street, I thought to myself, I can never turn my back on Joseph. Never. Not after what I know.

And yet, as I wavered in my seat that Fast Sunday, I realized, I could not remember the last time someone (myself included) had testified of Joseph from the pulpit.

In the early days of the church, after the martyrdom, only those who had personally known Joseph stood to bear testimony. Obviously, this was a cultural development, not doctrinal, but it happened. Until most who knew Joseph had passed on. (Susan Easton Black, Firesides in Nauvoo, 1995).

Startling contrast. I even asked my husband if he thought I had offended some with my testimony. Had I been perceived as simple-minded, unintelligent or uninformed? I didn’t know.

Concerns over Joseph’s history and character are not new. Yet rumblings of late are louder than I remember. I know Joseph made mistakes. (Haven’t we all?) And still, God used Joseph as an instrument to accomplish his work. Of this I have no doubt.

Russell M. Nelson said, “The Lord uses the unlikely to accomplish the impossible.”

That was Joseph. Unlikely, uneducated, untainted. God, knowing a successful restoration was imperative to the divine plan, chose Joseph. Not just at age 14, but every step of the way.

How can we judge a man who literally held the world on his shoulders? We cannot fully understand the context of his life, the newness of all he was learning, the questions he must have had. He too had concerns. He took unimaginable leaps into darkness. He knew sorrow, struggle, heartache, and aloneness in ways most of us never will.

Moroni prophesied his name would be had for good and evil among all nations, kindreds and people (JSH 1:33). I just never thought it would be among our people.

So I have a challenge for those of us who call ourselves Latter-day Saints. That we revisit our testimonies of Joseph. That we read his history and the book he translated. We must be willing to wrestle with difficult questions. And by wrestle, I mean consider our questions good. Consider them an opportunity for personal revelation, not a threat to our faith.

Last Saturday Sheri Dew spoke to the women of our stake and taught that spiritual wrestling leads to knowledge and revelation. That, she said, is a powerful combination. Only a witness from the Holy Ghost can counteract any logic or intellectualism that has cut away at our faith. “The only way to know Joseph was a prophet is by the Spirit,” she stated. “That is the only way.”

And so. I wanted to add my witness here.

That I know Joseph was God’s prophet.

He is more than a name in history to me. He is my brother. And when I use that term, I do it with great affection. I believe Joseph knows those who know him. And when we speak good of him, honor him, we can feel a connection to him that is powerful and sustaining.

Jesus himself said in Section 136,

[Be] faithful in keeping the words given you from…Joseph Smith, whom I did call upon by mine angels… and by mine own voice out of the heavens, to bring forth  my work; which foundation he did lay, and was faithful; and I took him to myself (DC 136:37-38.)

A new fire has flared in my heart for Joseph these last few weeks. I have drawn courage from his commitment, strength from his brave pursuit of an almost impossible path, and light from his interactions with the Father and Son.

Let the naysayers say what they will about Joseph, but I will defend him. All my days.

How has the Spirit witnessed to you of Joseph’s divine role?  And do you agree? Have we become afraid to say what we believe about Joseph? How can we make wrestling with questions a door to revelation rather than doubt?

Thank you for this article. I have heard a lot of negatives about Joseph Smith lately. This is my conclusion after praying about it: yes, he was human and made mistakes (every prophet is human and does make mistakes), yet they are good men. True prophets, called of God, must be good men and morally clean. Thus things I'm hearing/reading about his moral standing being questionable cannot be based on actual truths. I have a testimony that Joseph Smith is a true prophet of God. I have felt this my entire life, and again when visiting his home area in New York. I felt it when a young friend was called to the Palmyra mission and shared amazing facts about Joseph Smith's first vision. Our testimonies do not need to be shaken by the current falsehoods going around. God calls good moral men as prophets.

I love the Prophet Joseph Smith with all my heart. Does he take the place of my Lord and Savior, Jesus Christ? Never! And yet, does he not stand somewhere near to my Savior? Of this I am convinced.Did the youthful Joseph Smith see God, the Father and his Son, Jesus Christ? I believe he did. Did a more mature Joseph translate plates that contain the story known as the Book of Mormon? I believe he did that, also. Did a man prophet receive multiple revelations, restore the Church of Jesus Christ on the earth and bring back long lost scripture and temple ordinances? Once again I believe with every fiber of my being.How is it that not KNOWING of these things I can still BELIEVE in them? Precisely because the Holy Spirit has witnessed these truths unto me. Let calumny defame, let bigots spread their vicious lies, I for one feel like shouting from the rooftops that there is a latter-day prophet; that his name is Joseph Smith; that he stands next to the Lord Jesus Christ in administering the affairs of Christ's true church here upon the earth.No one will ever take the place of my beloved Savior. He is my Lord and my God. That doesn't mean that he doesn't have helpers by his side. Joseph Smith is one of them. Of this I am sure!