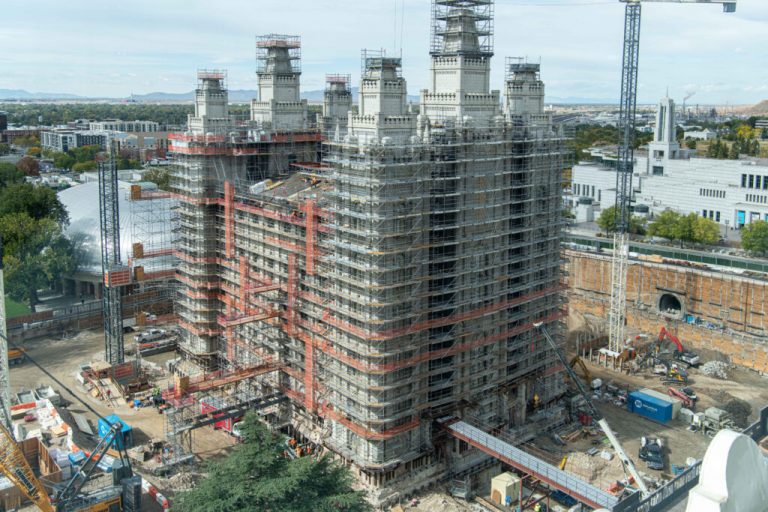 Two years into the renovation of the Salt Lake Temple of The Church of Jesus Christ of Latter-day Saints, the First Presidency has announced a new estimated completion date — noting the temple and its surroundings will be completed in 2025.

“Inspired modifications and additions to the project and scope have been made so the temple and Temple Square can serve many generations yet to come,” wrote President Russell M. Nelson and his counselors, President Dallin H. Oaks and President Henry B. Eyring, in a statement released Monday, Dec. 13.

The Salt Lake Temple closed Dec. 29, 2019, for the renovation. The Church Office Building plaza closed just over a year later, in February 2021, for an upgrade.

In the statement announcing a new estimated completion date for the temple renovation project, the First Presidency said the “seismic strengthening of the Salt Lake Temple and the extensive remodel of the temple and surrounding area are sacred and significant undertakings.”

As the project has progressed, Church leaders have learned a great deal about the condition of the temple and its surroundings.

“The work is truly remarkable and is being guided by the First Presidency,” President Nelson, President Oaks and President Eyring wrote. “We look forward to welcoming the world at that time to visit, tour and learn about this sacred temple and The Church of Jesus Christ of Latter-day Saints.”

The site for the Salt Lake Temple was identified by Brigham Young soon after early settlers arrived in the Salt Lake Valley in 1847; construction on the building began in 1853 and was completed 40 years later.

The Salt Lake Temple has been renovated many times since its original dedication in 1893, including an extensive renovation from 1962 to 1966.

To read about the latest update on the renovation process, click the headline below:

Temple Square renovation update: Pouring concrete for the addition, vertical drilling from the roof and boring pipes below the foundation