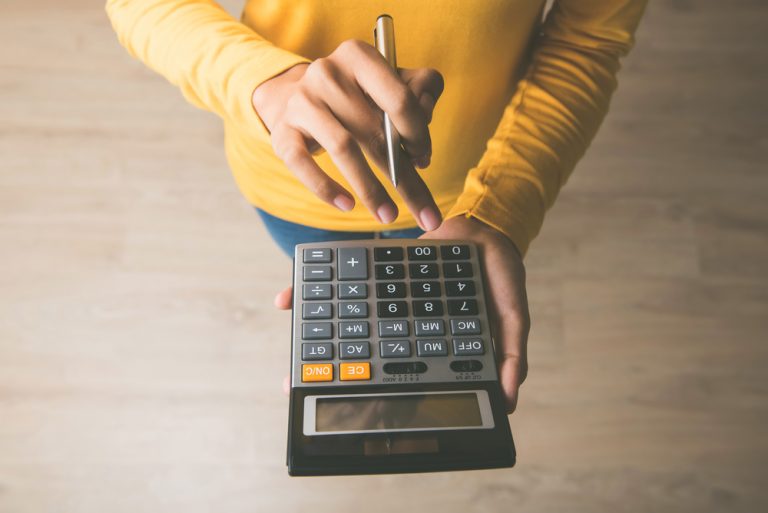 I had just worked an algebra problem on the chalkboard and told my students to do the calculation on their calculator. Before they could punch it in, I told them what I thought it should be. This is a good way for them to check and see if they punched it in correctly. One student expressed her amazement.

“How can you calculate that so fast, and without a calculator?”

I laughed. “I grew up before the days of calculators. We had to calculate everything we did by hand. So those of us who had lots of math or science classes often got so we could calculate things in our head.”

“Wow!” one boy said. “You must be older than you look. I can’t even imagine not having a calculator.”

“What was the first calculator you used?” another boy asked.

“Well,” I replied, “if I remember right, the calculator was a Hewlett-Packard one. Other companies were already starting to produce calculating machines, but some were too big to carry around. The story I heard was that one of the two owners of Hewlett-Packard got tired of doing engineering calculations by hand. He told his engineers to make a machine that could do the basic four functions, add, subtract, multiply, and divide, and would fit in his pocket.

“The engineering team got busy with the new assignment. After a year, the appointed time to have the machine ready, they had something that was fairly good, but bigger than desired. I heard that when their boss was out of town, they went to his wife and got all his shirts and had them tailored with bigger pockets. If they couldn’t make the calculator fit the pocket, they would make the pocket fit the calculator.”

The students laughed at that. Then a girl raised her hand. “Today, calculators have lots more than just those four simple functions. There are logs, square roots, and all sorts of things. How did you do those without a calculator?”

“That is a good question,” I replied. “In those days, we had a shelf in the math and science rooms with books of tables. The tables for logs, for example, would have a list of log values in increments of one-tenth. If the number you needed wasn’t there, you used interpolation, a method of using the other numbers, to approximate the value you needed. There were similar tables for sines, cosines, tangents, and roots. It could be quite tedious.”

“What was it like when you got your first calculator?” a boy asked.

“I was in college when I got my first calculator,” I replied. “But the first one I used was in high school. I was a junior in a chemistry class. We had been working on learning how to use the slide rule to do calculations. Then a school board member told us they had purchased three calculators for the classroom, one for each table. The calculators cost $250 each, but we could forgo spending half the semester mastering the slide rule.”

I nodded. “And that was with a discount. It mostly only did the four functions, but it tried to approximate logs and things using built-in tables. But its logs, roots, and trig functions often weren’t accurate enough for what we did.

“Another thing about them was they had to be plugged in. So, an electric box was wired at the center of each table. We had to pass the calculator up and down the table during tests. We were always told to clear it before passing it. And sometimes the calculator would overheat and shut off, usually in the middle of a test because of heavy usage.”

“Sounds like my brain,” a girl said. Everyone laughed.

“So, what was the changeover like to using calculators in a math class?” a boy asked.

“I’ll tell you what,” I replied. “I’ll share some of that another day. Right now, we need to finish the lesson so you will be prepared to do your homework.”

The students nodded, but one student said she could hardly wait to hear more.