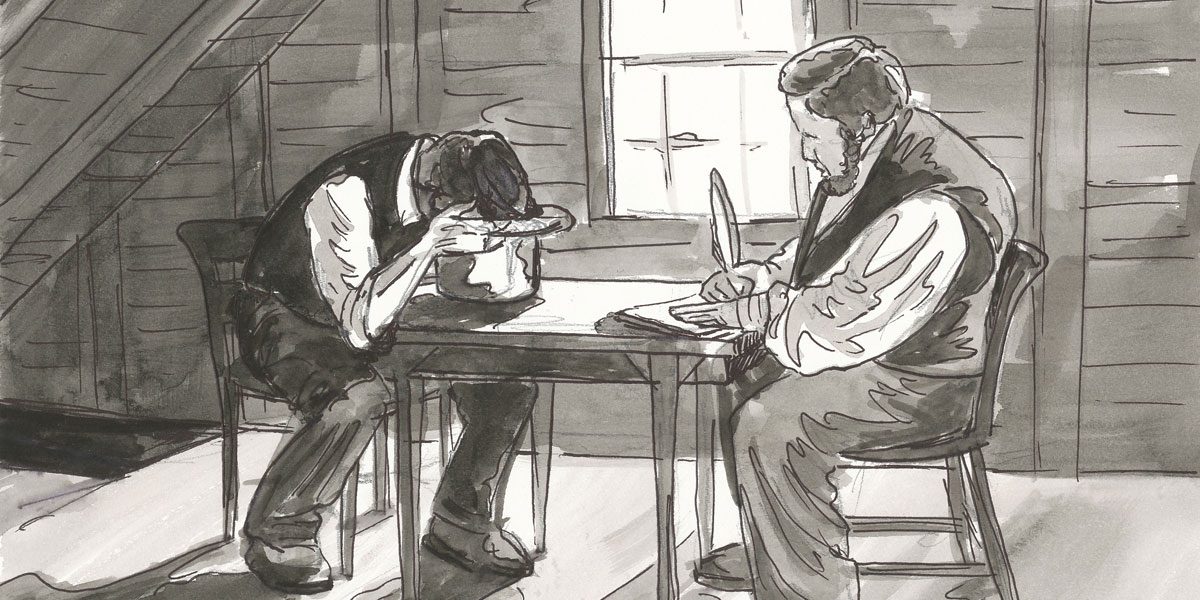 View the full article on Book of Mormon Central.

This is the ninth and final part in a series of KnoWhys looking at the question of “Why Do New Testament Words and Phrases Show Up in the Book of Mormon?”

Part 8 of this series of KnoWhys looked at the possibility that many of the New Testament phrases that can be found in the Book of Mormon were introduced into the text at the level of rendering the underlying text into English. The focus of that KnoWhy was on the theory that Joseph Smith produced the English translation through a divine process that maintained “loose control” over the translation. Meaning that Joseph received ideas into his mind and then was aided by the Spirit as he put them into his own words. In other words, Joseph Smith’s involvement as the translator was, at least in part, responsible for the English language that resulted.

Witnesses to the Book of Mormon translation process have described it as very transparent––Joseph Smith worked in the open, as seen by several witnesses. Joseph did not have a curtain up, blocking himself from view (except in the very beginning and while working with Martin Harris in 1828, copying down some of the characters from the plates), so witnesses were able to see what he was doing while he dictated the translation to his scribes in 1829. Joseph’s standard procedure was apparently to place the interpreters (the stones later referred to as the Urim and Thummim) into a hat to obscure the light. He would then put the hat up to his face and read aloud the English words that appeared on the interpreters.1

Emma Smith described her experience with the process, depicting Joseph as “sitting with his face buried in his hat, with the stone in it, and dictating hour after hour with nothing between us.”2 When Martin Harris acted as scribe, he would sit across the table from Joseph and write down the words Joseph dictated. Harris later recalled that as Joseph used the interpreters to translate, sentences would appear. Joseph read those sentences aloud, and after writing down the words, Harris would say, “Written.”3

Based on the various witnesses’ statements, LDS scholar Royal Skousen has identified the following stages in the translation process: 1. Joseph Smith saw (in some way) the English text;4 2. Joseph read off the text to the scribe; 3. the scribe heard the text; 4. the scribe wrote the text.5

In 1991, a large number of fragments from the original English translation manuscript of the Book of Mormon were discovered, conserved, and photographed by Skousen and his team.6 Among the many important pieces of information first learned by this effort, relative to the present discussion, is the fact that the surviving portions of the Original Manuscript, dictated by Joseph Smith and written down by his scribes, according to Skousen, show absolutely “none of the normal signs of rewriting or revising.”7 Joseph employed none of the normal steps of selecting, compiling, adapting, collating, incorporating, arranging, or adjusting that are regularly used by writers of lengthy, multifaceted documentary volumes.

After three decades of meticulous work on the original text and wording of the Book of Mormon, Skousen has concluded that the evidence discovered and uncovered in his research indicates that “Joseph Smith himself was not the author of the Book of Mormon nor even the actual translator of its English language text. Instead, the evidence is very strong that the original text was revealed to Joseph Smith word for word in English and he dictated it to scribes.”8

The “revealed words” approach ultimately accounts not only for the fact that short phrases from the New Testament are found in the Book of Mormon but also long near-verbatim quotes as well. Regarding the presence of extensive phrases and passages from the Bible in the text of the English translation of the Book of Mormon, Skousen concluded that, based on evidence from the Original and Printer’s Manuscripts, they also seem to have been revealed word for word, as opposed to having been copied from the Bible:

The evidence is very clear that Joseph Smith also dictated the long biblical quotations in the Book of Mormon by means of the translation instrument. His method of translation and the witness statements seem to preclude his direct use of a King James Bible. It is true that the text he read off is based on the King James Bible, not on some other biblical text in English. Even so, it is clear that Joseph did not have his scribe, Oliver Cowdery, copy the biblical quotations from an actual Bible.9

The complexity with which these longer quotes are sometimes woven and blended together with the surrounding Book of Mormon narrative makes the idea that they were coming from Joseph Smith’s memory seem inadequate.10 And keeping in mind that Joseph Smith was most likely not using a Bible during the translation (as discussed in Part 8), the presence of these long biblical quotations makes the “word for word” reception option all the more appealing.

The presence of New Testament language in the Book of Mormon can be surprising and difficult to understand for some readers of this sacred book of scripture who are not expecting it to be there. And as a translated book, it is possible that not all of the New Testament language contained in the English translation of the Book of Mormon was present literally in the Nephite language inscribed on the Golden Plates. Such expressions may have been introduced in the revealed process to suitably express Mormon’s text in English, as dictated by Joseph Smith to his scribes. Whatever the exact process of how the words came to Joseph’s awareness, the presence of New Testament words and phrases in the translation can be seen as divinely inspired and sanctioned.

The Book of Mormon is “Another Testament of Jesus Christ.” Nephi recorded what the Lord said regarding the notion that some would complain that the Book of Mormon was another Bible “and there cannot be any more Bible.” To which the Lord emphatically stated:

Wherefore murmur ye, because that ye shall receive more of my word? Know ye not that the testimony of two nations is a witness unto you that I am God, that I remember one nation like unto another? Wherefore, I speak the same words unto one nation like unto another. And when the two nations shall run together the testimony of the two nations shall run together also. And I do this that I may prove unto many that I am the same yesterday, today, and forever; and that I speak forth my words according to mine own pleasure (2 Nephi 29:8–9, emphasis added).

Also, when the Lord speaks forth His words, He does so, as Nephi reminded his readers, “according to their language, unto their understanding” (2 Nephi 31:3; see also Doctrine and Covenants 1:24). What better way would there be for the Lord to bring forth a book of Scripture in modern times, for modern Bible readers, which is meant to testify of the truthfulness of the doctrines of the Bible, than to have this new book of Scripture treat the words of the Bible as the sacred Word of God? The Book of Mormon uses biblical language to clearly affirm the essential truth that “Jesus is Christ, the Eternal God, manifesting himself unto all nations” (Book of Mormon, Introduction).

4.It is difficult to determine whether Joseph was seeing words written on the stone, or if looking at the stone aided in opening up a vision in his “mind’s eye.” If he saw words appearing on the interpreters, their function may have been comparable to that of the Liahona possessed by Lehi and his family. 1 Nephi 16:29 states: “And there was also written upon them a new writing, which was plain to be read, which did give us understanding concerning the ways of the Lord; and it was written and changed from time to time, according to the faith and diligence which we gave unto it.” For more on theories regarding the translation process, see Royal Skousen, “How Joseph Smith Translated the Book of Mormon,” Journal of Book of Mormon Studies 7, no. 1 (1998): 24; Brant Gardner, “The Gift and Power: Translating the Book of Mormon,” presentation given at 2011 FAIR Conference.

7.Royal Skousen, The History of the Text of the Book of Mormon, Part 3: The Nature of the Original Language, 39.

8.Royal Skousen, The History of the Text of the Book of Mormon, Part 3: The Nature of the Original Language, 37.

9.Skousen goes on to argue: “First of all, Oliver continued to spell words the same way when those words appeared in the Book of Mormon text proper. Second, the King James chapter specifications are ignored. The biblical quotations in the original text of the Book of Mormon follow a narrative basis rather than the short chapters found in the King James Bible … A third piece of evidence that the biblical quotations are being dictated to the scribe is that the scribe … sometimes misheard Joseph Smith’s dictation, just as he misheard phrases in nonbiblical passages …” Royal Skousen, The History of the Text of the Book of Mormon, Part 3: The Nature of the Original Language, 42.

10.For more on the complexity of the blending of language from the King James Bible into the Book of Mormon text, see Skousen, The History of the Text, Part 3, 1031–1042; Book of Mormon Central, “Why Do New Testament Words and Phrases Show Up in the Book of Mormon? Part 6: The Old Testament as the Source (part b) – Composite Quotations and Ancient Collections of Texts (Jacob 4:15–16),” KnoWhy 535 (October 10, 2019).