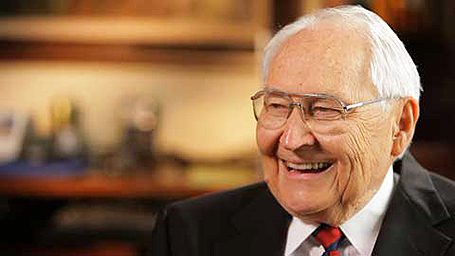 Elder L. Tom Perry was remembered Friday, June 5, 2015 at a funeral held on Temple Square in Salt Lake City as dynamic, exemplary and according to President Thomas S. Monson, “one of the most kind, considerate and gracious men I have ever known.”

He has been a member of the Quorum of the Twelve for 41 years. President Monson said, “He was one who responded willingly to any assignment and in whom we had complete confidence. Blessed with an abiding faith, an optimistic attitude and a charitable spirit, Tom exemplified the declaration of the apostle Paul, ‘Be thou an example of the believers.’”””

His son quoted his Oct. 2004 conference address to describe what that Quorum service meant to him.

“In our Quorum, we have a special brotherhood. We are there to lift, inspire, and bless each other with the spirit of our calling. When one is burdened, there are 11 others anxious to help lift and share that burden. At times we rejoice together in feelings of accomplishment. We weep together in times of sorrow. We never feel as if we are facing a problem alone! There is always the counsel, support, help, and encouragement of our Quorum members.”

His son said that every day was glorious to him. He embraced a life that was always full speed ahead.

Elder Ballard agreed, saying, “Elder Perry, by his nature, always expected things to move forward. He seemed to have very little patience if time was not productive. He always taught, encouraged and inspired all of the General Authorities that we could do more, we could do better and we could move faster in blessing the lives of every member of the Church. His vision of the impact the gospel should have in all or our lives was an important part of his apostolic calling.”

Elder Perry told them, “I just worry about what’s going on in the world. How did we get mixed up in this mess where worldwide morals are declining at the same time we have populations all over the world that are suffering? We have lost our good, strong Christian beliefs. It is just a tough time.”

He did not linger on the negative. He said resolutely, “We have great, young, talented help in the Church. These young kids who come along. I just love them. They are strong.”

Elder Oaks said that Elder Perry “made a tremendous impression on everyone he met. As one Catholic friend said, “His goodness was just transparent. He impressed you simply by being the great-souled man that he was.”

“Elder Perry was an inspiration to me. Four years ago he visited my offices in New York. I was struck by the incredible vitality of this man. He was friendly, clear and direct, very direct. I was inspired.”

Elder Oaks said, “I am sure that Elder Perry had this effect on thousands of people over the course of his life.”

Elder Oaks mentioned, “At the funeral of J. Reuben Clark Jr. Joseph Fielding Smith said, ‘When an elder of Israel dies, he does not go to some glorious place to play a heart, to sing and wait for the redemption to come in some future period. He has duties to perform. They go on. There is labor on the other side just as there is labor here. Our brethren who have gone to the other side are organized and they are carrying on their work over there as it has been assigned to them to bring to pass the fullness of our Savior’s mission.”

When Elder Boyd K. Packer visited Elder Perry, the day before he died, they agreed that their friendship will continue in the next life as they have new assignments.

President Monson said that Elder Perry had been much on his mind since his passing. He said, “Tom Perry combined an insightful mind with a faith-filled heart. He could work wonders with his words. His style is distinctly his own. He was endowed with a rich and resonant voice with which he proclaimed the word of God at home and abroad all the days of his life.

“All who heard his voice and those who read his words could readily see that here was a fearless defender and testifier of truth. Intelligent in thought, radiant in warmth and personality, succinct and powerful in expression, unwavering and unflinching in commitment and belief, he could teach, persuade, warn, explain and encourage.

“When I think of his courage, I am reminded of the apostle Paul’s powerful declaration, ‘I am not ashamed of the gospel of Christ for it is the power of God unto salvation.’

He said, “His service to the Lord’s work has been exemplary and without flaw.”

He said that when the First Presidency visited Elder Perry there was a sweet, peaceful feeling. He said, “It was a sacred time of passing, for we know that the veil was very thin. and “he would be summoned soon to the other side.

“The gospel that he believed so deeply and taught so well provides the assurance that all is well with this beloved servant of our Heavenly Father. His indomitable spirit has gone home to that God who gave him life. HIs record is known in heaven and there will yield its treasure trove of good deeds and faithful service.

“A part of this cherished friend will always go with me,” said President Monson.

Part of the services included a military honor guard that reverently removed the American flag from Elder Perry’s casket, folded and presented it to Sister Perry. “Taps” were played and a 21-gun salute was fired for his military service as a Marine in World War II. He is survived by his wife, Barbara, two of his children and many grandchildren and great-grandchildren.

Elder Perry was born in Logan, Utah, on August 5, 1922, to Leslie Thomas Perry and Elsie Nora Sonne. He married Virginia Clair Lee on July 18, 1947. She died in 1974. They are the parents of three children. Elder Perry married Barbara Taylor Dayton in 1976. He is preceded in death by his first wife, a daughter and a granddaughter.

Elder Perry served as an apostle, the highest priesthood office in the Church, for more than 40 years. He was ordained an apostle in April 1974, after serving as an assistant to the Twelve since 1972. Latter-day Saint apostles are called to be special witnesses of Jesus Christ just as apostles were called in New Testament times.

Over the past week, condolences have poured in from all over the world on the Church’s social media channels, including Elder Perry’s Facebook page.