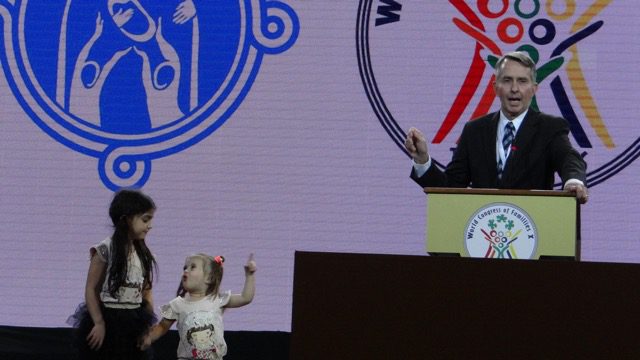 The LDS church is young in The Republic of Georgia. One branch in the capital city, Tbilisi, was organized in 2002 and the first baptisms were performed in the country in 2003. There are 14 missionaries serving in the branch and a congregation of warm and welcoming Georgians and members of other nationalities. The members fellowship, love, and serve their communities. They have a branch of LDS charities there that works to improve conditions for Georgian families and refugees, who have fled to Georgia for safety in recent years.

Despite the small size of the LDS church in this actively Orthodox country a great honor was given to Elder Larry Kacher by the organizers of the World Congress of Families X which took place in Tbilisi, May 15 -18, 2016. The World Congress invited Elder Kacher, of the Seventy, to take some time in the nationally televised coverage of opening ceremonies of the event on May 16th.

Elder Kacher’s presentation was very powerfully felt by the audience. They laughed, cried and broke into spontaneous applause as he warned against activism that takes away parental rights, and the dangers facing people’s hearts and the family.

He admonished the Georgians and World Congress attendees from all over the world of many different denominations to focus on being moral, to have changes of heart, to use technology to strengthen the family, to protect the unborn, to be teachable like little children, and to protect and strengthen the marriage relationship.

Regarding abortion, Elder Kacher reminded the audience about how Mother Theresa denounced abortion and offered to care for any unwanted child. He also related how the first person to welcome the Christ child was an unborn baby, John the Baptist in his mother’s womb. He jumped within her when she met with Mary.

When he taught the people to be teachable he brought two darling little children from the Tbilisi ward to the stage and showed the country what the hope of their country looked like and how they need to keep learning, loving and growing like little children.

At one point Sister Kacher joined her husband on the stage as he told of an experience when he and his wife were almost swept out to sea and weren’t sure if they would live through the experience. He expressed concern, as a husband, for where he had led his wife and the danger he had unknowingly put her in. This parable expressed the importance of husbands being good leaders with their wives and families and taught the value and depth of the husband and wife covenant relationship.

Finally, Elder Kacher told the audience that the hope for the world lies within the inner person. He told everyone to pray for strength.

As an attendee and a Mormon, my heart swelled with appreciation for this historic experience given to the LDS church by people in Georgia. There was a feeling of unity as the Holy Patriarch of the Georgian Orthodox church also spoke about the need to protect and strengthen the family as the foundation of society. Intellectuals and leaders from around the globe were inspired by powerful, unified messages from the largest and maybe the smallest religious sects in Georgia.

A Historic March For The Family Through Tbilisi

As part of the conference there was a march for the family from one side of the city to the largest Orthodox Cathedral in Georgia for a short service and blessing on the family by the Holy Patriarch.

More than 50,000 people joined the World Congress of Families and world leaders in this march to support the family.

Georgian political leaders expressed gratitude for what they learned at the congress and some even shared intentions to create legislation that will strengthen the family further and removed information from schools that will damage morality in their nation.

To read more about the history of the LDS church in Georgia click here. https://www.mormonnewsroom.org/facts-and-statistics/country/georgia