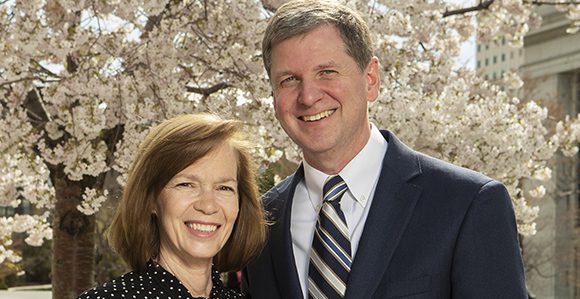 As a 19-year-old entering the Missionary Training Center, Elder James Richard Rasband felt inadequate and stressed at the prospect of declaring the gospel with power in a foreign language in an alien land.

On his third day in the MTC in Provo, Utah, the anxious elder recorded in his journal, “I finally slept last night.”

He felt similar trepidation many years later when he was called as a stake president.

In both cases, he wondered, “Am I adequate to fulfill the call?” And in both cases, the answer was the same. “Stay at it. Joy comes.” Or, as his mother once told him when he expressed his feelings about not being enough for a new calling, “Oh, Jim, the Lord is fresh out of perfect people. Just go to work.”

He feels a bit of that now after being sustained in April 2019 in general conference as a new General Authority Seventy. Interviewed just after his sustaining, Elder Rasband smiled and said, “At least this time I’ve slept some, which is different than my mission.”

And this time he knows from experience to persist and to trust. “Heavenly Father just needs us to go to work and share the healing and joyful message of His Son and of His Son’s atoning sacrifice.”

To read the full article on ChurchofJesusChrist.org, CLICK HERE.