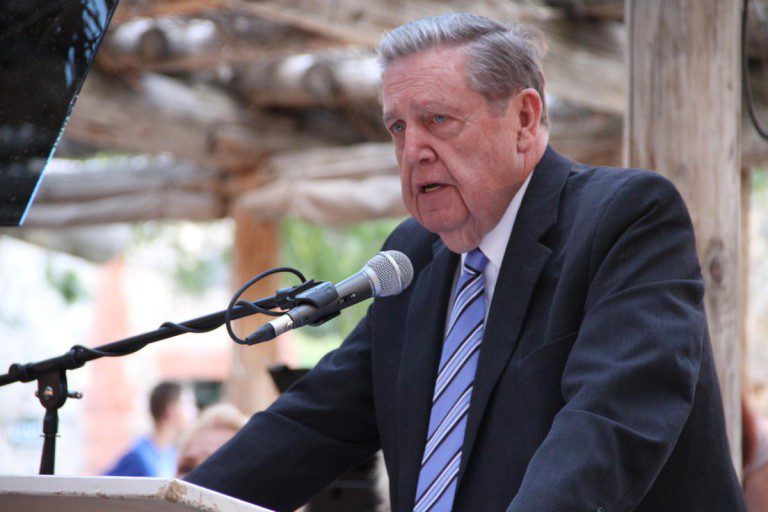 Though he is a member of the Quorum of the Twelve Apostles, Elder Jeffrey R. Holland’s Mormon and Utah heritage is about diverse as it can get for one person, he said.

Elder Holland’s comment came in a July 17 address in the Bowery at This Is the Place Heritage Park in Salt Lake City to a joint gathering of the Sons of Utah Pioneers and Daughters of Utah Pioneers and family members. It was during the second annual SUPer DUPer Day, an occasion for the two groups to join together with their families for park activities and picnicking.

“First, a comment about my Holland family, who clearly were not Utah pioneers,” he said. “They were a rowdy bunch of Roman Catholic miners born in Ireland who made their way to Montana and Colorado, ending up in Park City at the turn of the 20th Century.”

Widowed at the age of 26, his grandmother with two little boys, Elder Holland’s father being the youngest, eventually made her way to Salt Lake City, where she was helped by a John Fetzer, the kindly bishop of the original Salt Lake City 8th Ward.

Stricken by smallpox, he was taken out of school by his stepfather, “a loss of opportunity and a blow to his self-esteem that he never fully overcame,” Elder Holland related.

“But heaven had its hand on him when, as a Civilian Conservation Corps recruit, he found himself in southern Utah in the early 1930s, during the Depression, where he met and married my mother.

“What a union! A wild, Irish dance hall piano-playing convert from Roman Catholicism who went through life with a smile on his face and a shine on his shoes marrying a very proper, stay-at-home, quilting and canning and canning and cooking, especially genuine and thoroughly good domestic daughter of Utah pioneers.

“I am the product of that union!”