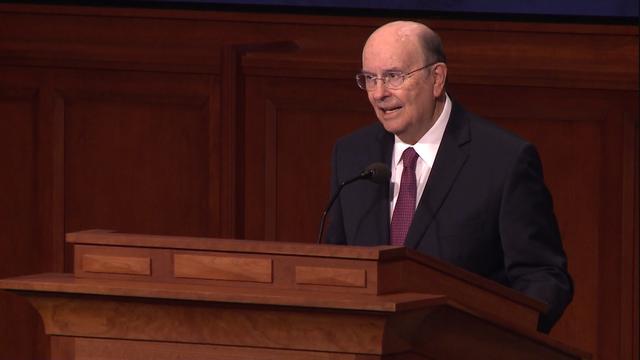 Elder Quentin L. Cook, an Apostle of The Church of Jesus Christ of Latter-day Saints, encouraged faculty and staff at Brigham Young University (BYU) Monday in their ongoing efforts to guide young adults through challenges to faith.

The Apostle asked educators to maintain “a laser-like focus on our responsibility to help build faith in Jesus Christ and in His restored Church.”

He suggested, “One area that can help us to build faith is to be particularly sensitive in creating unity and being grateful for diversity.”

“We each need to be at the forefront of righteously repenting and following the counsel of President Russell M. Nelson, who asked us ‘to build bridges of cooperation rather than walls of segregation,’” Elder Cook said.

“A principal purpose for me today is to encourage you in your efforts to bless and guide the rising generation, to correct falsehood and matters taken out of context in a loving and kind way,” Elder Cook told faculty in a prerecorded message streamed during the first day of BYU’s annual university conference.

Elder Cook, who was a missionary in Great Britain in the 1960s, used the fictional writings of British author Anthony Trollope to illustrate how criticism of faith has a long history that has touched all religions. Trollope’s early writings emphasized the critique of the Anglican Church, including some of its history and financial affairs. Trollope’s fictional Church leaders respond to this criticism in different ways. One vigorously defends the church by hiring a lawyer, who discovers loopholes and avoids engaging the merits of the arguments. Another, the Reverend Septimus Harding, is an “openhanded, just-minded man” who feels “there might be truth in what has been said.” He is described by some as having “persistent bouts of Christianity.”

What we see in Septimus Harding can help us understand why The Church of Jesus Christ of Latter-day Saints responds the way it does to criticism, Elder Cook said. He noted, as a chief example, the faith’s response to the “Book of Mormon” musical.

“We are certainly among the least aggressive in defending ourselves against obviously untrue and/or unfair criticism,” Elder Cook said. “Maybe ‘persistent bouts of Christianity,’ a heartfelt desire to be true Christians, and a determination to turn the other cheek are the only plausible answers” for why we respond in this way.

Knowing how and when to respond to criticism is, in part, the fruit of doing the requisite educational legwork to understand as much context as possible. Elder Cook quoted the managing director of the Church History Department, Matt Grow: “Be careful about sources of information that just seek to tear people down. Look instead for sources of information that are based on the records left by the people themselves and that seek to be fair to them.”